We’re all painfully aware of how brutally cold winter has been thus far. January produced average monthly temperatures five to ten degrees below normal across Minnesota; for some communities, this was one of the coldest Januarys on record in the past 35 years. It may not come as a surprise that we had the dubious honor of reaching the coldest temperature in the nation on more days than any other state – seventeen. It may also be unsurprising that the amount of ice cover on the Great Lakes is much higher than average this year, and may be on track to break the record of 94.7% in 1978.

According to the Great Lakes Surface Environmental Analysis, which offers frequent updates on a variety of Great Lakes conditions, the lakes reached 79.7% ice cover on February 6th. Data from February 7th indicate current ice coverage for each of the Great Lakes is as follows:

While none of these are winter records, it is rare to see so much ice on the lakes this early – ice cover usually peaks in early March. This means there are still several weeks during which ice cover can accumulate.

These conditions buck the trend of the past 40 years, during which ice cover has declined by 71% on average. In more recent decades, the average amount of Great Lakes surface area frozen at the peak of winter has been 40%.

This year’s large amount of ice cover may seem contradictory in light of the warming trend induced by climate change, but scientists emphasize that there is a complex relationship between evaporation, ice cover, and water temperature, as documented in a new report by the Great Lakes Integrated Sciences and Assessment Center. Higher summer temperatures lead to higher water temperatures. As winter approaches and cooler air is ushered in, it reacts with the warmer water to increase evaporation, which causes the abrupt heat loss that paves the way for the formation of ice. In general, the greater the extremes between summer heat and winter cold, the greater the ice cover. 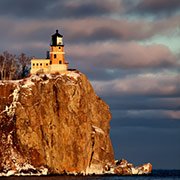 Increased ice cover on the Great Lakes can impact surrounding areas in various ways. It produces more sunshine, reduces lake-effect snowfall, increases access to ice fishing, minimizes evaporation (which leads to higher water levels come spring), protects wetlands and fish spawning areas from winter winds, facilitates animal migration, limits shoreline erosion, and generates some interesting scenery in the form of ice jams. Large ice cover can also produce colder air masses and serve as an obstacle to shipping and navigation when thick ice fails to break up easily in the spring. Ice jams that form in the rivers connecting the Great Lakes can cause flooding when they restrict water flow.