Good news for lovers of authentic Thai cuisine: you no longer have to cross the Mississippi to find authentic Thai cuisine. The owners of Bangkok Thai Deli, 315 University Ave. W., St. Paul,  which has become a pilgrimage site for lovers of authentic Thai Cuisine, have opened a new outpost, Krungthep Thai, at 2523 Nicollet Ave., in the former Seafood Palace location. (in case you are curious, Krungthep is the Thai name for the capitol city of Bangkok. Actually, the full name, according to Wikipedia, is Krung Thep Mahanakhon Amon Rattanakosin Mahintharayutthaya Mahadilok Phop Noppharat Ratchathani Burirom Udomratchaniwet Mahasathan Amon Phiman Awatan Sathit Sakkathattiya Witsanukam Prasit.) 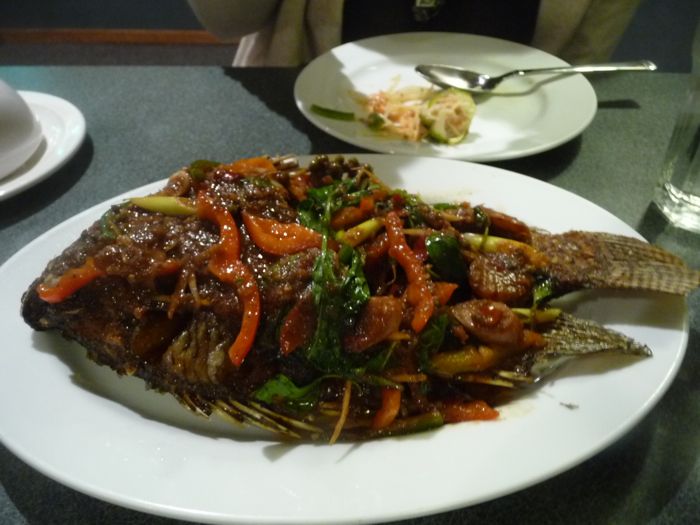 We live near Uptown in Minneapolis, which has one of the the highest Thai restaurant densities of any neighborhood outside of Bangkok – there are at least half-a-dozen places within a few square blocks. So why would we drive all the way to the Capitol to eat Thai? I have to admit that it has been years since I have dined at most of them, but my hazy impression is that they all serve pretty similar menus, and taste pretty much the same. Not bad, by any means, but not like in Thailand, either. These restaurants have cracked the code for preparing the kind of Thai cuisine that Minnesotans like, which is a little milder in its flavorings than the Thai food in Thailand.

Much of the credit for this successful adaptation goes to Supenn Harrison, owner of Sawatdee, which now has six locations in Minnesota. From Sawatdee’s kitchens have come forth a generation of cooks who have gone on to open their own restaurants. Many Minnesotans, it is safe to say, got their first taste of Thai at a Sawatdee restaurant, and it wasn’t so foreign that it turned them away from exploring this new world of flavors. 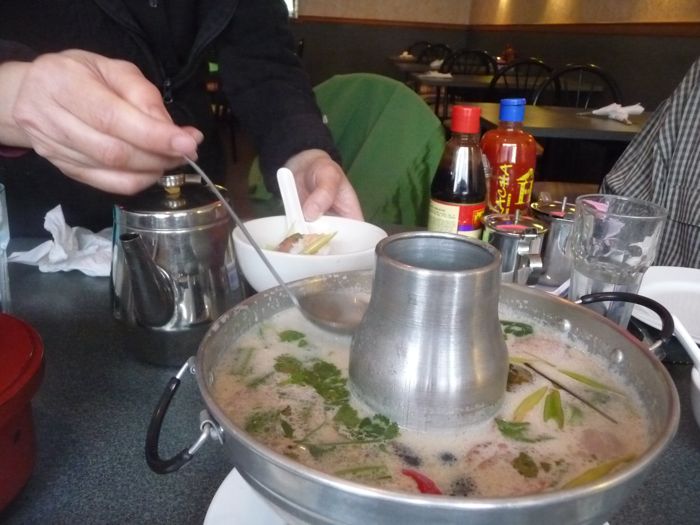 But in adapting to the Minnesota palate, some of the dynamic range of Thai cuisine seems to have gotten muted – not just the spiciness, but also some of the less familiar flavors. A proper tom yum soup is hot and sour with the spiciness of hot Thai chili peppers and the bite of lime juice, and redolent with the aromatic flavors of lemongrass and kaffir lime leaf and galingal, which looks a lot like ginger, but has a more complex and challenging flavor. More often than not, local versions of tom yum are not very hot or not very sour, or are missing at least one of these ingredients, and often substitute supermarket button mushrooms for straw mushrooms.

Krungthep Thai doesn’t quite have the funky charm of the original Bangkok Thai, which is tucked away in the back of an Asian grocery store, and has Thai music videos playing endlessly on a TV monitor. The new place, which inherited its decor from the Seafood Palace, looks almost elegant by comparison, and as soon as the wine and beer license arrives (application pending) it will be a suitable place for a date, or at least a cheap date. 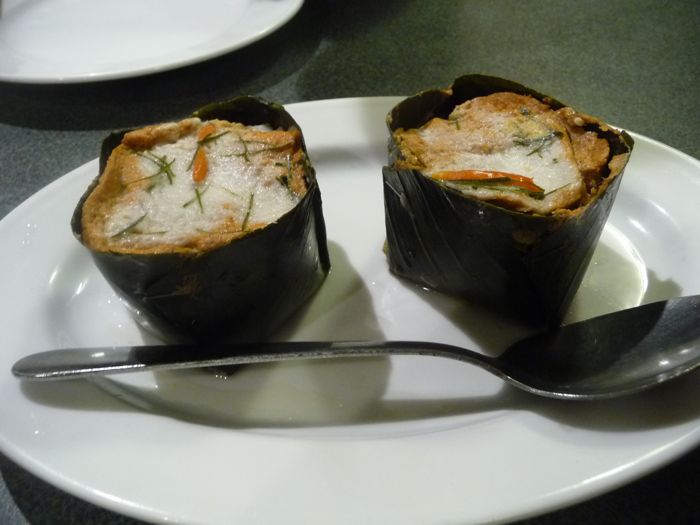 The menus at Krungthep Thai are actually identical to those at Bangkok Thai Deli, and includes a big variety of dishes that you won’t find at most other local Thai restaurants, such as hor mok, a delicious fish custard steamed in a banana leaf cup (two for $6); and the meal–sized boat soup ($6), a dark and intense Thai cousin of Vietnam’s pho, full of sliced and stewed beef, meatballs and tripe, and darkened with beef blood. (A pork version is also available, which I have not tried.) I recently had a tasty version of this dish at Kinsen, but without beef blood, it really wasn’t the same.

And Krungthep Thai offers an expanded list of seafood specials not available at Bangkok Thai, designed to attract the Seafood Palace clientele. The precise offerings seem to vary a bit from day to day, but on recent visits they have included walleye, sea bass, pompano, live lobster, snow crab and clams. You can have these prepared in a variety of ways, but on our first visit we ordered the tilapia with fresh chili sauce, which arrived at the table deep-fried, head-on, and topped with a spicy savory sauce of red and green peppers, lemongrass and cilantro. We liked it so much that on a return visit, we ordered the whole pompano ($12.95) prepared the same way. 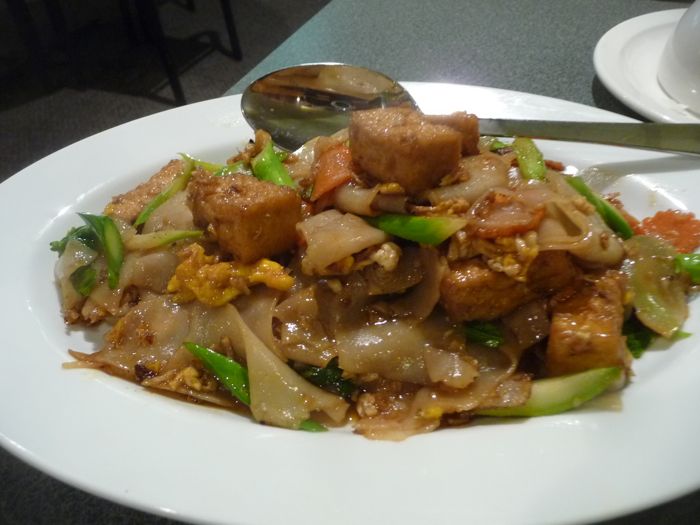 A couple of dishes were less satisfying – the seafood pad kra prow ($10) didn’t have much of the flavor of holy basil that is supposed to distinguish this dish. And the Rama Thai noodles with seafood seemed rather bland. (I checked with a Thai friend, who said that this dish isn’t completely unknown, but isn’t nearly as popular in Thailand as it is in the Twin Cities.)

Be sure to save room for the sticky rice with mango, simple and sweet and rich with coconut milk.

There are a lot of other dishes on the menu that I would like to try, ranging from the stir-fried shrimp with egg ($12) to the stir-fried Chinese eggplant with shrimp and pork ($12).