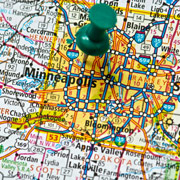 The Twin Cities’ sole light-rail transit line, the Hiawatha from downtown Minneapolis to the Mall of America via the airport, has exceeded ridership projections and returned a greater share of operating costs than buses. Metro Transit is adding more cars to the trains to meet peak demands, driven by the more than half of riders who are new to transit since the 2004 launch.

But 12 miles of track and 19 stations do not make a 21st century transit system for a metropolis of 3 million people. While a couple more light rail lines are under construction (Central) or on the drawing board (Southwest), their billion-dollar price tags and space-hogging geometrics won’t work in most other high-traffic corridors.

Those corridors are the key to knitting together the system’s rail transit backbone in ways that can serve many more potential riders. They include east metro arterials Snelling Avenue and Robert and 7th Streets, plus Central, Chicago, Hennepin and Nicollet Avenues, Lake Street, American Boulevard and West Broadway in the west.

The Metropolitan Council, along with affected cities, counties and the state Department of Transportation, is pursuing a plan to develop rapid bus service, an economical light rail alternative on rubber tires, along these arterial routes. After extended study, the first concrete proposal is for a Snelling Avenue rapid bus line slated to open in 2015. 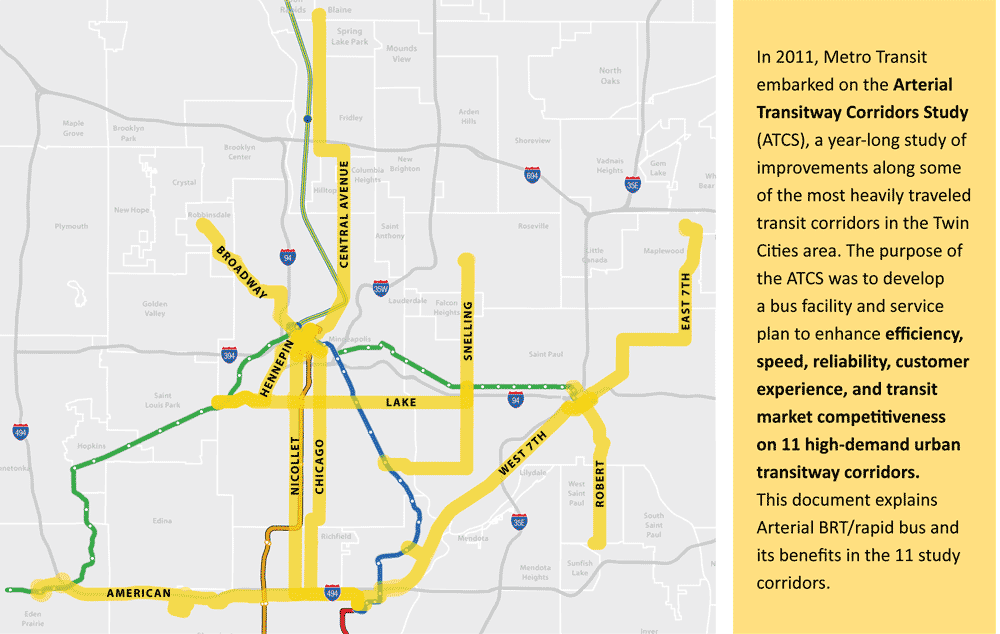 The 10-mile route from Roseville to the 46th Street Hiawatha station in Minneapolis boasts a cost estimate that looks like a rounding error for light rail: $25 million. Half of that would be for two or three heated stations every mile and most of the rest for state-of-the-art buses that mimic the comfort and travel times of rail, said Charles Carlson, Metro Transit’s senior manager of rapid bus planning.

The Snelling Avenue route would offer 10-minute headways between buses, 15 to 25 percent faster travel and a projected 20 to 40 percent increase in ridership based on results in cities such as Boston, Cleveland, Kansas City, Las Vegas and Seattle. Speedier service comes not from dedicated roadways but from limited station stops, pre-boarding fare payment (as with LRT), minor street improvements and traffic signal priority. Regular buses on 30-minute headways would continue to make the more frequent stops available now.

More than two-thirds of the funding for the project has been identified, Carlson said, leaving $7 million to $8 million to be sought, possibly from federal grants.

Snelling moved to the front of the line with a second-best technical evaluation score, while No. 1 Lake Street and several other corridors were back-burnered pending studies of transit alternatives such as streetcars. In addition, Metro Transit’s plan completed in February calls for near-term implementation of rapid buses on West 7th Street and further study on Chicago, Broadway and East 7th Street.

“We think we’re striking the right balance for these corridors,” Carlson said. “It doesn’t work for everybody,” but no transit system does. For that matter, neither do private cars. In nearly all the corridors under study, more than 10 percent of households lack motor vehicles. The corridors also account for half of all the Twin Cities’ urban bus travel, and they potentially connect 450,000 people and 460,000 jobs. By 2030, the study projected, those numbers will increase by more than 20 percent.

With that growth in mind, Metro Transit hopes that a new rapid bus route can be developed every year or two, producing a substantially interconnected system of high-quality transit by 2030. Each new step along the way enhances the usefulness and appeal of all that has come before. Another byproduct would be new opportunities for infill residential and business development that makes the entire region more efficient and competitive.

Developers are already stepping in along Cedar Avenue in the southern suburbs, where a 16-mile rapid bus line on a dedicated highway transitway from Lakeville to the Mall of America is scheduled to open next year. Two new eateries will be built near the Apple Valley station, according to the Star Tribune, and city planners are setting a framework for transit-oriented development of offices, townhouses, condominiums and apartments.

The Twin Cities have long lagged comparable U.S. regions in the quality and quantity of transit service. Rapid bus lines at $2 million to $5 million per mile in upfront costs—compared with $20 million to $40 million for streetcars and $60 million to $100 million for light rail—are an affordable path to a system that works for many more people.