Federal involvement in educational policy began in 1965, under President Johnson, with the Elementary and Secondary Education Act (ESEA). PBS, in 2005, published a good historical snapshot of the federal government’s involvement in national education policy up to that time: 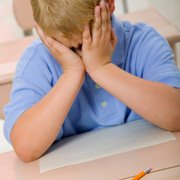 “In the beginning, ESEA allocated $1 billion a year to help subsidize schools with high numbers of low-income students. It funded Head Start, a preschool program that helped poor children prepare for first grade and later budgeted an estimated $11 billion to $13 billion a year to help kindergarten through 12th grade schools in poor communities. The provisions of the law also included funds for professional development for teachers and programs designed to increase parent involvement…. Despite funneling federal money to schools, ESEA adhered to the historic paradigm of a limited government involvement in local schools and left the responsibility of managing public education to the individual states. Under the 1965 law, states created academic standards and assessed student progress but were not held accountable by the federal government for the results, according to U.S. Department of Education officials…. Major disparities between the reading and math scores of students in economically disadvantaged school districts and the scores of students in more affluent communities raised concerns, and led to a revision of the law in 1994 by the Clinton administration, resulting in the Improving America’s Schools Act…. In 1998, only 60 percent of fourth graders performed at or above the “basic” level of NAEP and only 30 percent of eighth graders and 40 percent of the nation’s 12th graders scored at or above the “proficient” or average level, according to the National Center for Education Statistics. The same year, the test still showed major performance gaps between white students who scored higher on the tests and black, Hispanic and American Indian students.”

As a presidential candidate, George W. Bush said in 2000, “I believe that measurement is the cornerstone to reform and measurement is the cornerstone to making sure children learn. And I am going to ask the Congress to pass a bill that says in return for receipt of federal money and in return for flexibility, for the federal dollars you receive, you must show us … you must show the nation, you must show the people in your area whether or not children can read, write, and add and subtract.” What resulted was the No Child Left Behind program. While NCLB has not been considered a success, the one thing it did was continue efforts at equalizing educational opportunity, access and standards across the country. It did not leave to individual states the option of under-educating its students, and creating a higher and lower class of educational opportunity, as existed before President Johnson.

As Chair of the House Education and Workforce Committee, John Kline has worked vigorously to return federal education policy to the time of 1964. Kline recently led the House in passing the revision of No Child Left Behind Act, which he called the “Student Success Act,” by a vote of 221-207. That would be 221 conservatives, without a single progressive supporting the legislation. In fact, Kline has failed to get any meaningful reauthorization of the ESEA legislation since assuming leadership roles. That is four years of failure.

His bill takes policy back 50 years, by returning power to the states. While “it would retain the No Child Left Behind requirements that schools test students annually in math and reading from grades 3 through 8 and once in high school, states would set their own academic standards, decide whether schools are meeting them and determine what—if anything—to do about underperforming schools,” according to the Washington Post. The provision ensuring “states use federal dollars in addition to, and not as a replacement for, state and local dollars to help low-income, minority, disabled students and English learners” is also gone.

Kline’s changes to No Child Left Behind caused public school districts to be nervous about the impact on their bottom line. “The bill would freeze in place the funding levels set by sequestration—a series of across-the-board cuts to nearly every federal program put in place to help trim the federal budget,” Education Week reported. [Education Week, 7/16/13]. Kline’s changes also “increase the leeway that districts and states have with funding and accountability. It doesn’t completely eliminate the federal role in education, though it does bar the Secretary of Education from encouraging states to implement national standards,” National Journal reported. [National Journal, 7/16/13]

Progressives say Kline’s bill would gut education dollars for poor students at a time when a record numbers of U.S. children are living in poverty, weaken the accountability of schools serving low-income, minority and special-education students and allow states to ignore their worst schools instead of improve them. An unusual coalition of business groups, such as the U.S. Chamber of Commerce and the Business Roundtable, have joined teachers unions, civil rights groups and advocates for the disabled to oppose the GOP bill.

As the Leadership Conference on Civil and Human Rights said: “All agree ESEA must be updated. However, this bill is not an update; it is a rollback. It undermines the core American value of equal opportunity in education embodied in Brown v. Board of Education. It abandons accountability for the achievement and learning gains of subgroups of disadvantaged students who for generations have been harmed by low academic expectations. It eliminates goals and performance targets for academic achievement, removes parameters regarding the use of federal funds to help improve struggling schools, does not address key disparities in opportunity such as access to high-quality college preparatory curricula, restricts the federal government from protecting disadvantaged students, does not address poor quality tests, and fails to advance the current movement toward college-and career-ready standards. It is also a rollback in resources. Schools, districts and states need adequate resources to address the needs of students, particularly as we ratchet up the momentum toward college and career readiness for all students.” John Kline’s efforts do precisely the opposite.

There are many good things to be said about the 1960’s. However, reverting to the time of no Voting Rights Act, no anti-discrimination law and no Medicare or Social Security is not among them.