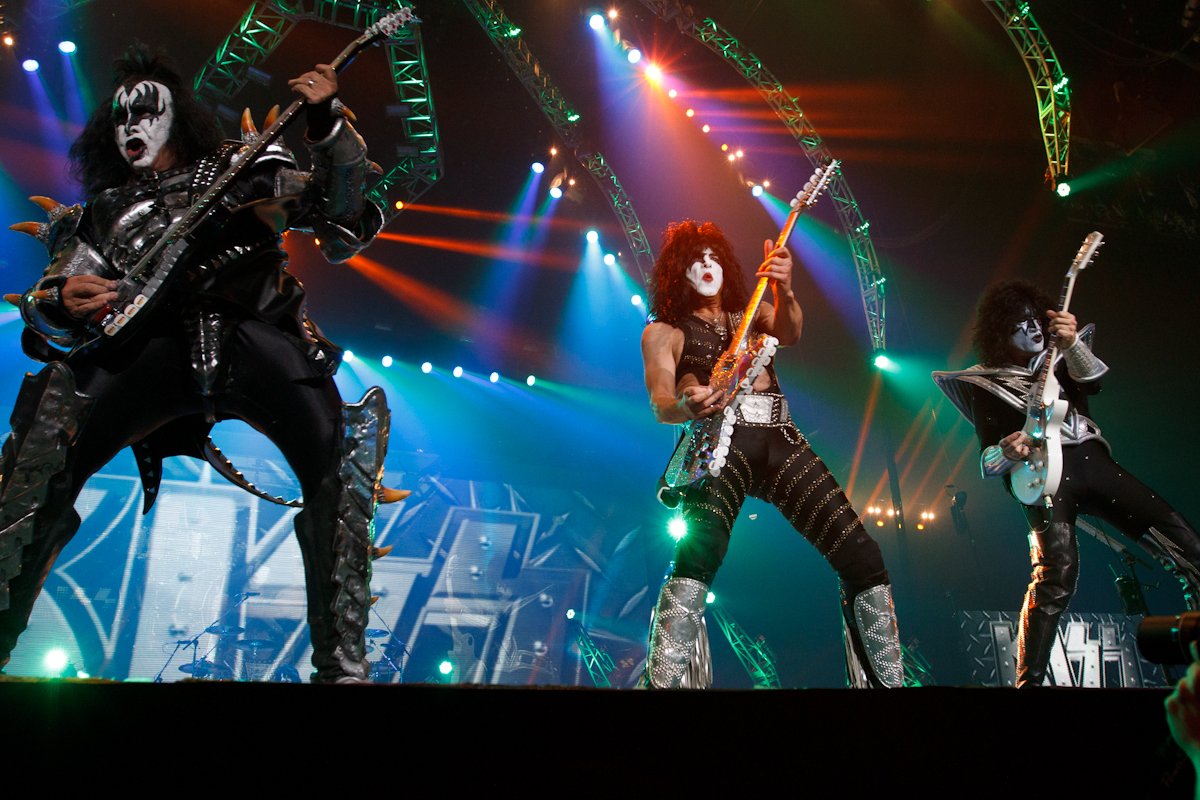 Last night’s KISS and Def Leppard show at the Target Center was, on paper, a little slice of rock-and-roll heaven for the “clap your hands, pump your fist” crowd. Combining the power of an 80s arena icon and a recent hall of fame inductee should have been a surefire hit, but unfortunately only one of those two icons managed to deliver.

The show was opened by The Dead Daisies, a rock outfit out of Sydney, Australia which is fronted by Jon Stevens, likely best known for replacing Michael Hutchence as leader singer of INXS after Hutchence’s death. Stevens and company didn’t have much of an opportunity to take advantage of the sort of exposure that would come from opening for a show of this calibre, as their set was both brief and sparsely attended. While The Dead Daisies played, the merch booths were jam packed with KISS and Def Leppard fans, and the arena itself was probably only filled to half capacity if that. This was probably for the best, as The Dead Daisies’ set started to blend together in short order, firing off a modern rock sound that maybe had nuances that an outsider couldn’t appreciate but really just sounded like one long and monotonous tune.

Def Leppard finally kicked off the real show (sorry, Daisies) following a very long intermission, powering in with a quick bit of The Who and blasting right into their setlist… and a whole mess of problems.

This is where a very obscure experience may come in handy for folks who have had it… have you ever played Rock Band? And in possibly doing that, have you ever experienced the terrible frustration of the calibration being off juuuuuust a little bit? Where it almost sounds right, but it’s not hitting at the right times, and it’s just terribly frustrating?

If you have, you now know exactly how Def Leppard’s performance felt. So congratulations on Rock Band coming in handy somehow.

There is no better word for their performance than “off.” In fact, one could possibly excuse it as simply being an off night for these guys. But one cannot deny that Joe Elliot’s vocal range is incredibly diminished today, forcing him to use a lot of smoke and mirrors to try to cover for the fact that he simply is not capable of hitting the sort of notes that he is famous for, and the overall performance suffered as a result. The hits were there, from “Hysteria” to “Photograph” to “Foolin’” and “Rock of Ages,” and there were moments in each of those songs where you could feel that old energy, but again, it was just off. Toss in some questionable decisions in the guitar solos that seemed to take away from the performance more than add to it and it just seemed like there may be nothing left in the tank for Def Leppard.

But do not tell that to the fans, because they were loud for those guys all night (minus a few moments of awkwardness during an acoustic rendition of “Bringin’ on the Heartbreak” where it seemed the crowd didn’t know they were supposed to be singing.) After every track, the whole Target Center went nuts, which was incredible to be a witness to. Off or no, people there were VERY excited to see Def Leppard live, and it was clear they were willing to excuse quite a bit for the pleasure of being a part of that sound that they were familiar with.

So while Def Leppard may have disappointed a touch, KISS absolutely did not.

There is a weird mix of carnival and convention to KISS shows. People converge on the sight in a fantastic array of facepaint and wild costumes to declare their fandom in much the same way as fans who attend comic conventions, but rather than paying tribute to superheroes from the inked page, these people pay tribute to Gene, Paul, Ace and Peter (or, on occasion, a mix of the four), while KISS themselves bring an amazing stage show to their performance. Pyro, stunts, weird performance art, a giant robot spider, and general crazy antics aren’t the icing on the cake but woven in with the music to make the KISS experience awesome and iconic.

The entire band was on point for most of the show, blasting out absolutely rocking renditions of tracks like “War Machine,” “Dr Love,” and “Shout It Out Loud” amongst a slew of their other hits, while Paul Stanley played the near perfect, if maybe a bit cliched, frontman between songs. If a Rock and Roll Roboticist (which absolutely should be real thing someday, MIT get on that right now) was ever to create an android to be the perfect rock frontman, they wouldn’t need to do anything but replicate Stanley, whose smoothness and energy is something which really needs to be seen to be believed.

Love him or hate him, Gene Simmons is the perfect compliment to Stanley’s friendly, positive, energetic antics. Simmons still perfectly plays out his role as “The Demon,” still hitting the classic blood-and-fire spots in a way that feels oddly fresh and menacing even now after all these years. On stage and in makeup, Simmons is all id, a primal beast with an element of danger, a truly larger than life character which you cannot look away from. Without getting into Simmons the man, it is clear that Simmons the performer is still outstanding and very good at what he does.

Experiencing KISS live makes it very easy to see why they were recently inducted into the Rock and Roll Hall of Fame. They are truly larger than life, more brand than band, with an appeal that transcends generational lines due to the fact that they are more characters than humans. They are rock and roll turned up to 11 in a world where yes, 11 is louder, and no, you can’t just make 10 louder and have it stop at 10 like a normal volume knob, why would you even say that?

While last night made it clear that Def Leppard has diminished with time, KISS seemed to still be on their game, and that made the entire night worthwhile. KISS definitely put on a memorable and enjoyable show that will likely stick with those in attendance for quite awhile.