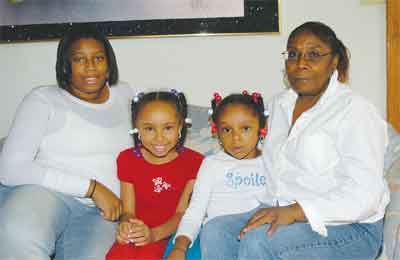 Sallie Sheppheard (at right) with her granddaughters (l-r) Salvele, Seanna and Jerilyn

Kinship caregiving has been a regular occurrence in our communities for as long as we can remember. If you think back to your own family or those in your neighborhood, school, or church when you were growing up, you’ll recall that grandmother with young children, or that hardworking woman with five-plus children following close behind her. They may not have been the children’s biological mothers, but they had taken the big step of raising those children in their extended families who were in need of parenting.

“I refer to kinship care as families raising families,” said Elvira Barnes-Wycough, community outreach coordinator at the AARP state office. AARP, in partnership with the Minnesota Kinship Caregivers Association (MKCA), is sponsoring Pathways to Kinship, a day-long conference that will guide grandparents to resources and services in addition to getting them connected to other kinship caregivers.
Kinship care may be needed for a variety of reasons. A child’s parent(s) may suffer from substance abuse, mental illness, incarceration, economic hardship, divorce, domestic violence, teenage parenthood, or death.

Sixty-two-year-old St. Paul resident Sallie Shepperd knows what kinship care-giving is all about. She is raising three of her son Sean’s six children: Salvele (17), Seanna (seven), and Jerilyn (six).

While her son has unfortunately battled with the criminal justice system, Shepperd has dedicated herself to her grandchildren. The oldest, Salvele, has been in Shepperd’s care since she was a baby.

In 1989, Salvele’s mother was planning to give her up. “Our family never gives the kids away,” Shepperd pleaded with her son’s girlfriend at the time. When Salvele’s memorable birth came, Shepperd said, “[The girlfriend] held her little body, folded her little arms, and handed her to me.”

Shepperd soon found out that taking this step would not be easy. She was raised opposed to using public aid, but now she needed it. Back in 1989, grandmothers were not included in the verbiage that stated the law for legal guardians.

“I was so set on getting my baby that I didn’t even think about practical and legal matters. I found out that there were only grants for birth mothers,” she said. She regularly complained to her state representative at the time about why grandparents are not eligible for these funds. Although Shepperd submitted recommendations to rewrite the law to include grandparents, her submissions were never formally acknowledged.

“Grandparents may not realize they can receive resources for raising children,” said Barnes-Wycough. Children are eligible for state and federal benefits even if their caregivers do not have legal guardianship or custody. These benefits include financial assistance, food stamps, health insurance, child care, and even disability benefits.

The issues did not stop there. Salvele’s parents were both crack addicts who exposed her to the substance from birth. ”They noticed at the nursery that her nerves were frayed,” Shepperd said, “and I couldn’t rub her stomach or get too close without her having a fit. I even got family members involved to remind me to take her to get her Hepatitis shots.”

She did everything she could to prevent anyone from taking Salvele away. Shepperd never legally adopted her, but she was always ‘her child.’ “The attorney said if the birth mother wasn’t [chiding], and we already have the same last name, it’s not necessary,” said Shepperd.

Kinship care could involve family arrangements, permanent legal custody, or even adoption where all parental rights are terminated. “Families don’t often label themselves ‘kinship’ because it is the norm,” said Barnes-Wycough. “The community sees it as a personal thing. They don’t realize that there is somewhere to go to get help.”

There are two state laws that do acknowledge kinship caregivers: Stand-by Guardianship (257 B) and DeFacto Custodian (257 C). The former allows a parent to provide written documentation designating another adult as the standby or alternate custodian in the event of death or incapacity. The standby custodian has the same rights in a court of law as the parent.

The latter law, DeFacto Custodian, gives certain third parties who have assumed full-time care of a child the opportunity in a custody case to approach the court on an equal footing with the parent.

Hennepin County has a kinship unit that works on finding relatives for placement of children. “There are people in families who are willing to take care of other family members’ children… The relationship becomes strange when the system is involved,” said a Hennepin County social worker who has asked to remain anonymous. “Family arrangements are constantly made. In fact, the system is trying to promote it more,” the social worker said.

“One of the major benefits is that the child always knows that they have family and they are not always looked at as ‘not their child,’” said Barnes-Wycough. “They don’t think of [the arrangement] as unusual. There’s no real stigma attached, there’s no sense of being different…you have family there to let you know who you are. The trauma of looking for parents is not as great when family is raising family.”

Most times, this transition is not planned or anticipated by family members and kin. Barnes-Wycough is a kinship caregiver herself. “Within 24 hours, I went from being fancy-free to raising a 10-year-old… It’s a choice… If one day someone was killed or no longer there for the child, what would you do? We do that traditionally because [things] happen. Preparation is really not possible,” she said.

In Shepperd’s case, her son continued in his life of crime. Three years ago, just as she was considering retirement, she got a call about her youngest grandchildren. “He and his new girlfriend — the mother of Seanna and Jerilyn — were tracked down by her fraudulent credit card trail and phone bills,” said Shepperd. She cashed in part of her retirement from one of her jobs and got a flight out to Arizona to pick up her grandchildren.

The girls are adjusting well at Webster Elementary School and an Africa-centered after-school program called Project Spirit, both in St. Paul. Shepperd says they have had problems anticipating their mother’s return.

“The mother would call them from prison and give them different times to expect her home. I finally explained to the girls one day [that] I don’t know when she’s coming, but you’re going to stay with Grandma, and we’re going to enjoy each day.”

The Pathways to Kinship conference will include panel discussions, informational booths, and even legal representation on the spot. “Families don’t realize that there are benefits and resources, and they don’t know how to access them,” said Barnes-Wycough. “The conference will help people learn what is available and what [the law says]. They will also cover topics such as the impact of secondhand smoke, alcohol, and children’s mental health.”

There may be some caregivers who have already attempted to find resources and became discouraged due to specifics that may be unclear. “Many times, services are not equal. They may want to know why someone may have gotten a certain subsidy — what am I entitled to?” said Barnes-Wycough. “For a caregiver or any aged relative, there’s a portion on the tax form where you could receive additional funds back,” she said.

“There are two sessions that look at public policy and basic needs, then a peer panel of real caregivers talking about their challenges and success. We invite people to get involved and to exercise the village concept with others in a similar situation,” said Barnes-Wycough.

The conference has been planned with the consultation of culturally competent leaders from diverse communities to address the different ways that different communities help kinship families. Interpretive services will be available.

Pathways to Kinship Care takes place Saturday, September 30, from 9 am to 4 pm, at St. Paul College, 235 Marshall Avenue in St. Paul. Registration starts at 8 am. Children and teens are welcome, and day care is available. Transportation and lodging can also be arranged for groups traveling long distances. Register in advance at 651-726-5653 (ask for Patty Foster) or email aarpmn@aarp.org. The event is free and open to the public.