Kinsen Noodles & Bar is a strikingly attractive new cafe in the same block as the Lagoon Theater – which should make it a dining magnet for Uptown moviegoers. But I’ve been to Kinsen twice in the past week, and on both occasions, the dining room has been nearly empty. One problem may be a lack of effective signage. But I suspect another factor may be a blurred culinary identity.

Kinsen is Thai for Good Noodles, and the menu specializes in noodle dishes – noodle soups, “street noodles” and stir-fried noodles, plus an assortment of rice bowls. Everything is priced between $11 and $14, which is considerably more than you would pay for similar fare on Eat Street or University Ave., but reasonable for Uptown. Many of the dishes are Thai in origin, but that word doesn’t appear anywhere on the menu, which simply promises “fresh, flavorful dishes from all over Asia.” In a conversation with the manager, she insisted that Kinsen isn’t a Thai restaurant, it’s an “Asian fusion” restaurant.

I can understand why the owners (who also own Kindee, across from the Guthrie Theater in downtown Minneapolis) don’t want to bill Kinsen as Thai: there are already four other Thai restaurants in Uptown – Chiang Mai Thai, Tom Rup Thai, Amazing Thailand, and Roat Osha, plus Sawatdee Express. 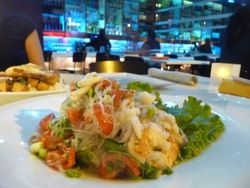 Asian fusion sounds good in theory, and the menu does offer a few hints of Vietnam, Japan and China. But in practice, the dishes we sampled seemed to be adapted to local tastes in ways that diminished the distinctive character of the originals. My entree of yum sen, a cold seafood salad made with shrimp, calamari, red onion, tomatoes and coriander – similar to the seafood salad offered at many Thai restaurants, but with a chili dressing that was much sweeter and hotter and less nuanced than the traditional version.

Carol ordered the kao gra prow, a stir-fry of tofu, Thai basil, garlic and chili sauce topped with a fried egg. This, too, was very similar to the bai gra pow that is a staple on Thai menus – but without the peppers, onions and mushrooms that usually add complexity this dish. 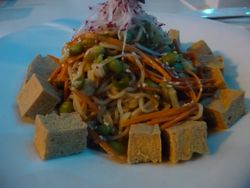 Other dishes were more satisfying – for example, the fried calamari appetizer flavored with slivers of jalapeno; the tempura shrimp udon in a flavorful dashi broth, and the peanut noodles with tofu, cucumbers, carrots and radish, sprinkled with sesame seeds and edamame (shown here) .

Bottom line – the cuisine is uneven, but interesting enough that I’d be willing to go back – especially on a night when they offer a deal. Luckily, that’s almost every night of the week. On Monday nights, you get an appetizer, two entrees and two tickets to any Landmark Theater (including the Lagoon next door.) On Tuesdays, all the noodle dishes are $10, and tap beers and rail drinks are $3. On Wednesdays, they offer happy hour prices all evening, and some Ladies’ Night specials. On Thursday nights, their version of date night includes an appetizer, two entrees, a dessert and a bottle of wine for $45. For the complete list and more details, click here: http://kinsennoodles.com/daily-special.