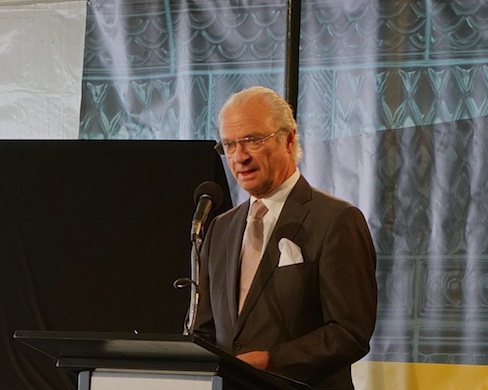 King Carl Gustaf addressed the crowd, "I am happy to see the American Swedish Institute is, so to say, keeping up with the times." (Photos by Jack Steinmann)

Jostling for position with other journalists carrying giant zoom lens cameras to get pictures of Their Majesties King Carl XVI Gustaf and Queen Silvia of Sweden during their recent visit to the American Swedish Institute, I was reminded of an email message from a friend in Sweden, “How great that you will have a chance to see our King and Queen this week! They need a lot of encouragement because the Swedish news media has not been kind to them lately.”  The popularity of the monarchy has taken a hit since the publication of a book two years ago that alleged the king had engaged in behavior unbecoming to royalty.

The monarchs did not give interviews during their brief visit to the Twin Cities. They went through the timeless crowd-pleasing motions of smiling, waving and lending a sense of history and importance to the double celebration of the opening of the Nelson Cultural Center at the American Swedish Institute and the 150th anniversary of the founding of Gustavus Adolphus College.

Swedish Americans, with their strong reverence for the old country, seemed to love the presence of the royals and were more focused on showing off their accomplishments than discussing the recent scandals that have made headlines in Europe. I interviewed members of the crowd of about 500 people who turned out for the 2 p.m. “Royal Dedication Ceremony” on Saturday, October 6. 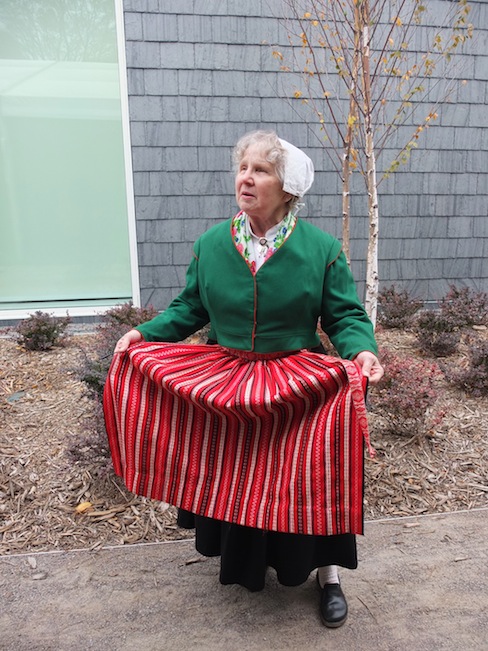 Joyce Hanson, a volunteer, wearing a costume from Leksand, Dalarna. “This apron was woven by my great-grandmother for my grandmother.”

Joyce Hanson, a volunteer usher, said that she is proud of Sweden’s “very rich culture .” She wore a traditional costume from her grandmother’s province of Dalarna featuring the apron, “woven by my great-grandmother for my grandmother.” Hanson maintains ties to Sweden by visiting friends and family there, she said. “When my grandchildren reach the age of 10, I take them to Sweden and we go to a hemslojd, a craft school, for  a week.”

Hemslojd, handicrafts, are serious part of the curriculum in Sweden and continue to interest Swedish Americans as evidenced in the current exhibits at the ASI that feature weaving, In Our Nature: The Tapestries of Helena Hernmarck, lacemaking, Treasured Threads: Nordic Lace and Swedish Handknits.

Music is also a treasured tradition that bonds old and new world Swedes. The American Swedish Institute Spelmanslag, a fiddling group played for the guests at a luncheon that was held at the Nelson Center on Saturday. Fiddler Bruce Johnson described how his immigrant father passed on the “living tradition” of fiddle music. “My father immigrated from Sweden in 1924. He came here and taught me how to play Swedish fiddle music along with my nephew Paul Dahlin.” The ASI group, led by Dahlin, performs internationally and makes guest appearances on A Prairie Home Companion with Garrison Keillor. 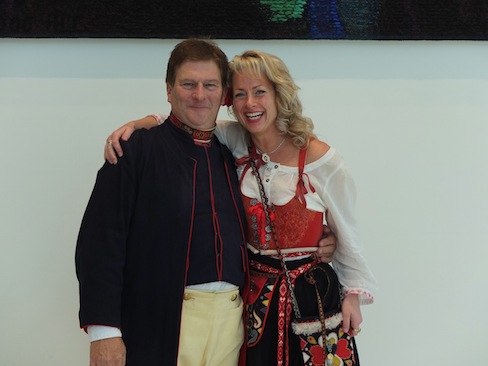 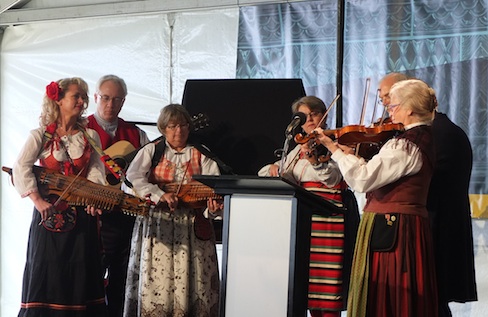 Mara Lien and Linae Larson were two young members of the crowd that turned out, and waited for nearly two hours in chilly weather, anxious to practice their Swedish language skills. The two, who attend Svenska Skolan, a Swedish culture and language classes, for children at the ASI, were there as representatives of Vasa Junior Folk Dancers. The girls presented Queen Silvia with flowers. They reported that the queen thanked them by saying, “Tack så mycket,” to which they replied, “Var så god.” 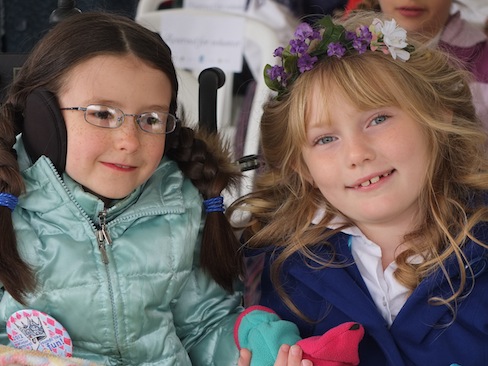 Mara Lien and Linae Larson welcomed the Royals with flowers.

Peggy Korsmo-Kennon, Chief Operating Officer for the ASI, spoke proudly about the programming work at the ASI. One ongoing program, Story Swap has elders from the Swedish American community sharing stories with recent young immigrants (ages 16-22) from other parts of the world about “how to find your way in a new country.” The new campus green space and Nelson Center is used by neighborhood schools and programs for activities as part of the institute’s goal “to have a deeper and broader impact on the surrounding community,” according to Korsmo-Kennon.

The dedication of the Nelson Center got underway on the grassy campus of the ASI beneath the shelter of a white canvas tent. The dignataries who joined the King and Queen on the dais were Bruce Karstadt, ASI president and CEO, Truett Lawson, ASI Board of Trustees, chair, Leslie Nelson, board member and major donor, Senator Amy Klobuchar and both the U.S. ambassador to Sweden Mark Brzezinski and the Swedish ambassador to the U.S. Jonas Hafström. 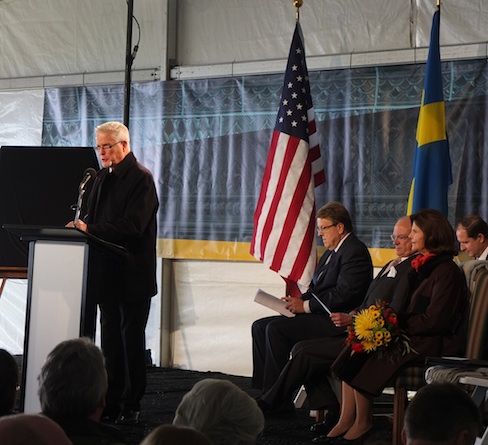 Truett Lawson, ASI Board chair, “We see that the celebration of culture as a universal need to be honored in others, as in ourselves.”

Truett Lawson Board chair made a speech in which he described the sense that the Nelson Center represents “a new hand, a game changer” for the ASI. One that will help transition to a new generation. He also spoke about the communities the ASI serves “Sweden and Swedish American” including “a unique presence and passion for the west Phillips neighborhood of Minneapolis.” 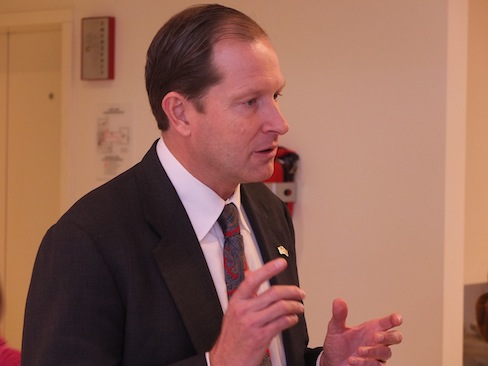 United States Ambassador to Sweden Mark Brzezinski, “Jag är väldigt glad att vara i Sverige!” (I am really glad to be in Sweden!)

Amabassador Brzezinski spoke about shared values between Swedes and Americans, “They care about what is happening in the rest of the world.” He also spoke about healthy trade relations and shared endeavors internationally, from Afghanistan to the Arctic. 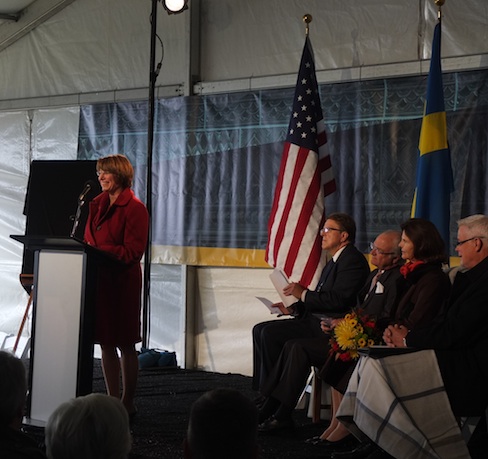 Senator Klobuchar pointed out that “10 percent of Minnesotans identify themselves as Swedish. That makes Minnesota home to the largest Swedish American population in the United States.”

Amy Klobuchar peppered her speech about the historic role of Swedish Americans in Minnesota government — twelve governors of Swedish heritage — with jokes about lutefisk and Senator Magnus “Yonson” Johnson, a Swedish-born American who represented Minnesota in Washington during the 1920s.

When KIng Carl XVI Gustaf spoke, he mentioned the historic tie his own family has with publisher, mansion-builder Swann Turnblad, who “encouraged by my grandfather, the Crown Prince Gustaf Adolf,  established an American Swedish Institute in 1929.”  He observed that “much has changed in the world and in our society since that time–change must be embraced.” He added, “So I am happy to see the ASI is, so to say, keeping up with the times.”

The king’s speech received a standing ovation. A plaque thanking Leslie Nelson and her family for their major donation that “got the ball rolling” on the capital campaign was unveiled and before the royal couple departed, artist Laura Jacoby unveiled her new blanket design, woven at Faribault Woolen Mill to commemorate the visit of King Carl XVI Gustaf and Queen Silvia to Minnesota, and, of course, there was more fiddle and nyckelharpa music. 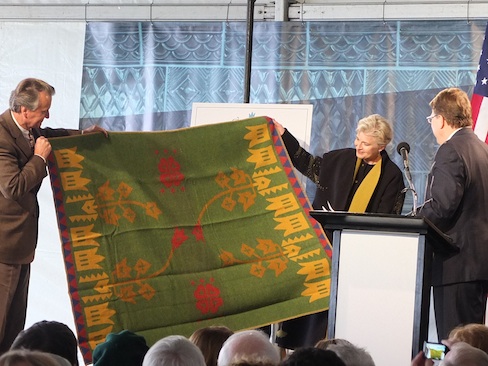 Artist Laura Jacoby presents the blanket she designed to commemorate the visit of the majesties to Minnesota. The limited edition blanket was produced at Faribault Woolen Mill. 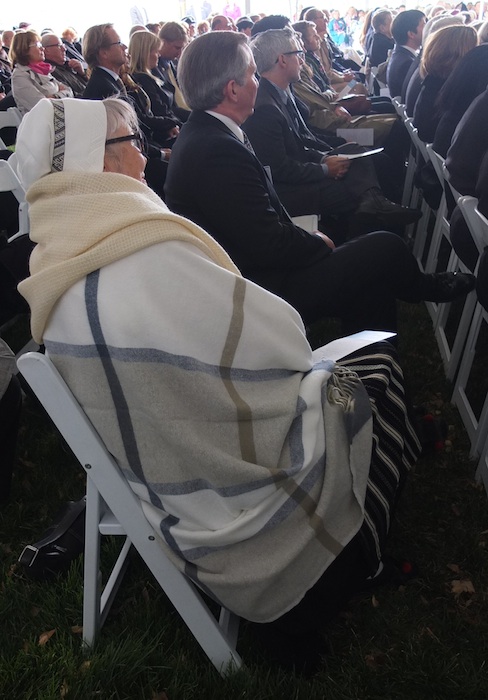 A crowd of about 500 people turned out in temps in the low 40s to attend the outdoor event. 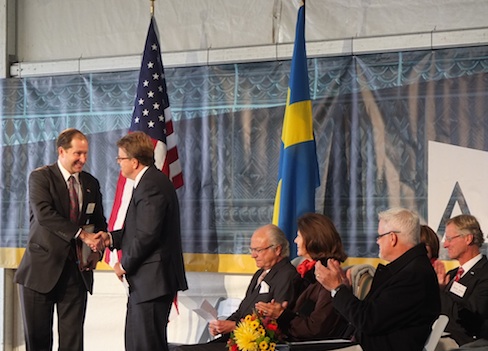 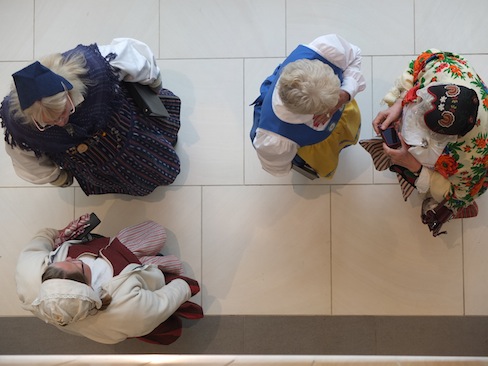 Many members of the crowd came decked out in traditional costumes. 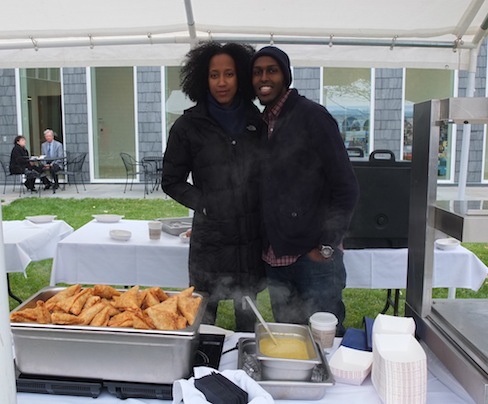 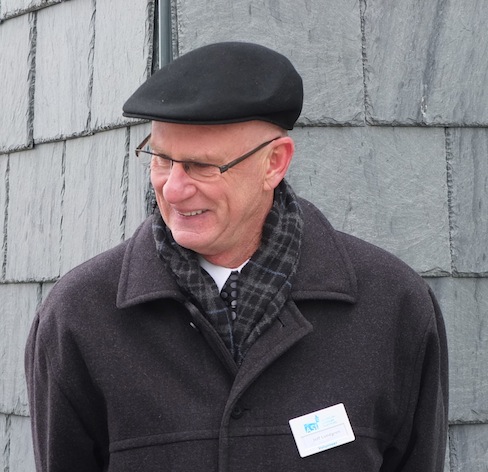 Jeff Lundgren, a volunteer, “Having a monarchy is interesting– all of the gossip about the King and Queen takes some pressure off the true rulers.” 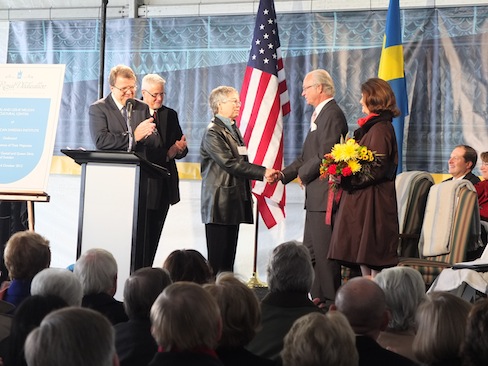 Leslie Nelson received flowers Queen Silvia and congratulations from the Royal couple for her family’s major donation to the capital campaign. 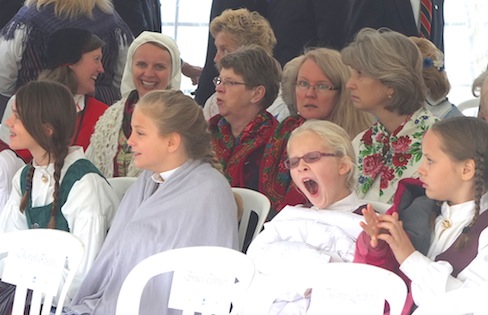 People gathered and waited up to two hours for the arrival of the Royal couple. 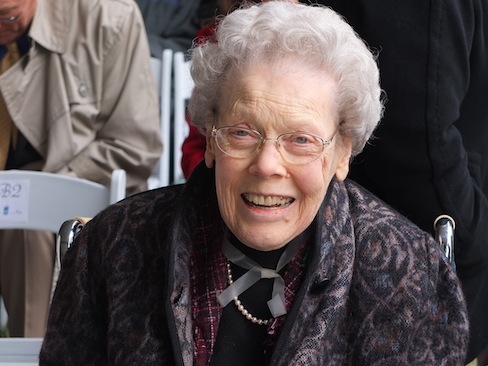 Phyllis Bakke, United States Swedish Consul, Emeritus was among the special guests in the crowd. 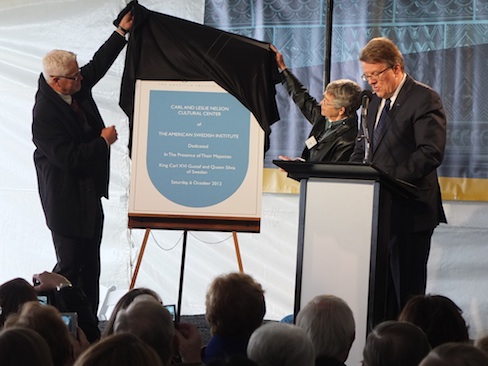 An image of a plaque to be installed at the front entrance was unveiled. “A starting gift from the Nelsons got the ball rolling.” 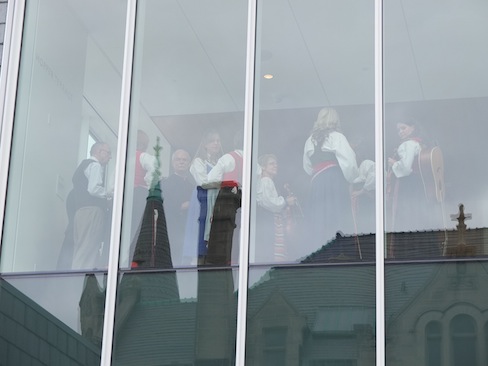 Musicians waiting to play at the luncheon are visible as the old mansion is reflected in the glass of the new Nelson Cultural Center. 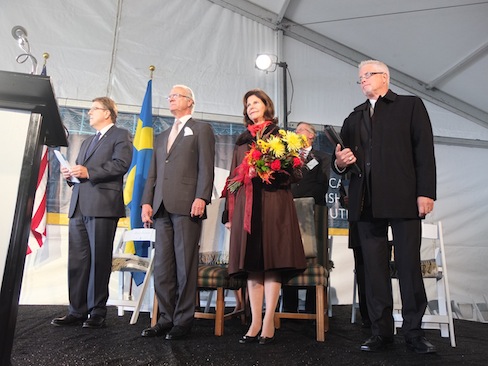 The King and Queen standing (ASI president Bruce Karstadt to the left and Truett Larson, board chair on the right) for singing Du Gamla, Du Fria 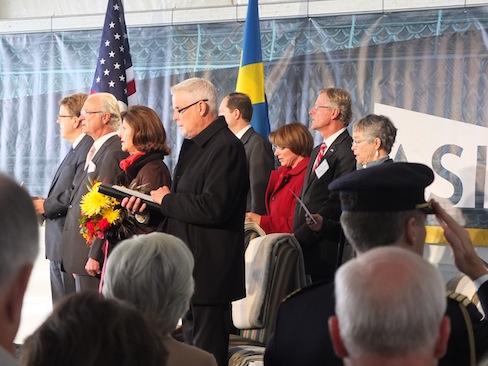 Senator Amy Klobuchar in red, the US ambassador to Sweden (obscured) and Swedish ambassador to the US Jonas Hafström and Leslie Nelson, donor.

CORRECTION 10/11:  The girls who presented flowers to the royal couple were there as representative sof the Vasa Junior Folk Dancers.