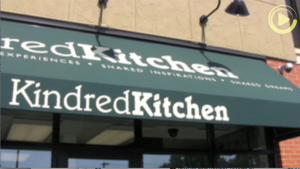 Kindred Kitchen is driving small business entrepreneurship in North Minneapolis. Food entrepreneurs with great ideas can use Kindred Kitchen — a food-based incubator located on Broadway Avenue — to learn about starting their own business, making their food safely and legally in a commercial kitchen, and marketing it within the community. Clients of Kindred Kitchen, which is less than a year old, are already selling their products at local cafes and farmer’s markets.

“Food makes people so excited,” says Kindred Kitchen director Terese Hill. “I love being able to help people turn that excitement into an income, a job, a business of their own.” In North Minneapolis, Hill sees a whole population of hidden food entrepreneurs, including those with the best ribs and barbecue sauce recipes.

Kindred Kitchen‘s current crop of clients includes an aspiring local pastry chef, a coffee shop-owner who hopes to feature fresh breads and soups, and a father-daughter team that will bake buttermilk, carrot and bean pies.

“It really means a lot to know that there’s a company in the community that’s willing to do something for the people in the community,” says future coffee shop owner Mike.

North Minneapolis is a place in need of solutions. Poverty, lack of jobs, and a housing crisis are longstanding systemic problems that were only magnified by the tornado that swept through the area on May 22, 2011. And yet, amid these serious needs we’re seeing creativity and innovation from solution-makers taking action. Immediate disaster relief came from individuals such as Peter Kerre from MplsTornado.info, non-profits like Urban Homeworks, and coalitions like the Northside Community Response Team. These solution-makers are learning to remedy what some Northsiders call the “storm before the storm.”