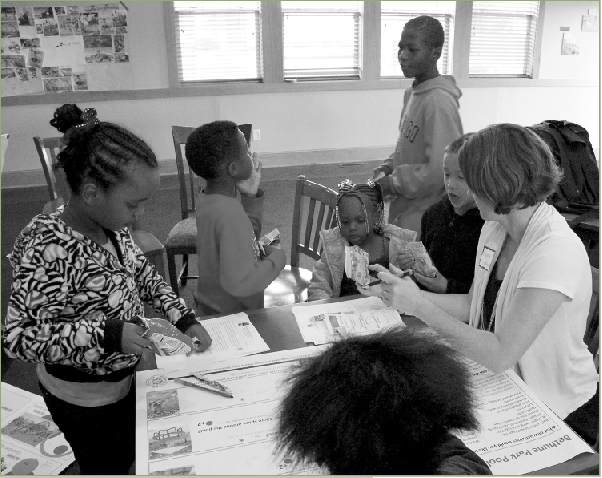 Groups of kids gathered around an exhibit to choose what examples of potential playground equipment they would most like to see in their park. Top: Bethune Community School Principal Cheryl Martin casts her vote for future park equipment on an exhibit board. On front: Now dry for the season, the oddly-shaped wading pool’s uneven floor can be seen more clearly.  The elevated steps were part of the original 1968 design for the pool, but no longer meet safety codes and will have to be removed during the renovations.

Rust adorns the frames of the rapidly aging playground sets standing in North Minneapolis’s Bethune Park, the once brightly-painted metal jungle gyms and swing sets now faded by decades of steady use. Likewise, the nearby sun-bleached concrete wading pool stands empty for the season.

Both of the two playground sets and the pool at 919 Emerson Ave. N. have had their time, according to Minneapolis Parks and Recreation Board staff, and need to be upgraded, for both aesthetic and safety reasons. As such, a full overhaul is in store for both, rather than repairing the existing equipment.

“We really can’t work with what’s already there,” stated Kate Lamers, the Park Board’s Project Manager during a meeting held on Thursday, Sept. 11. Lamers explained that the 1989-built playground has lived its original predicted lifespan and the materials used are past rescuing.

Thursday’s meeting, held in the Heritage Park Community Center, was formatted like many planning meetings lately, with displays set up for visitors to look over showcasing several potential options to be voted on. The community center was bustling with children, who attended the meeting to help Lamers and some associates pick between several viable exhibits for what the future park may look like. Potential layouts included a range of challenges from climbing walls to web-like rope jungle gyms.

Options for a new wading pool were also on display. The current pool was constructed in 1968, and has long since been deemed as not up to the safety codes the city requires of up-to-date children’s pools. Arranged in an odd shape with an oblong octagonal protrusion and an uneven floor, Lamers said the current model has caused some injuries in the past, though hasn’t proven to be too treacherous. Safety codes must be met, and the park board is taking this opportunity to improve the installation.

Jody Dahms, the president of Aquatic Design Solutions, has been brought in to consult on the pool project. He presented two possible options for the new water feature. He said a normal wading pool is certainly workable, but on the other hand, an increasingly popular fixture called a “splash pad” is also a possibility. With no standing water, a splash pad would decrease the possibility of drowning, while still keeping kids entertained and refreshed in the summer months with assorted fountains and other playful features.

“Of course, to get a nice splash pad will be more expensive than just a normal wading pool,” Dahms said. Voting at the meeting resulted in a draw between the two possibilities, with the potential for a hybrid similar to what can be seen at Lupient Water Park among the suggestions. 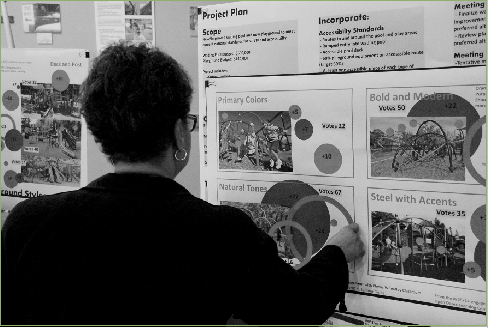 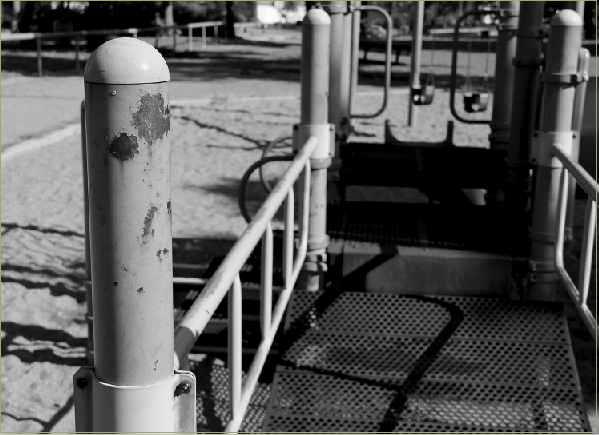 For the kids, votes were cast based on what looked the coolest, but for the adults in attendance, other factors came into play. Which models are most handicapped-accessible? What design looks the safest? Why did none of the proposals include a swing set, a staple of almost every playground? What kind of material would the playground be built on (sand, concrete, bonded rubber, etc.)? And most importantly: how much will this project cost?

For now, nothing is decided, though a proposed budget has been presented. A $33,000 grant from playground equipment manufacturer Game Time is in the works, but it is not yet official and would require using their equipment only. The work on the playground has been estimated to cost roughly $150,000; that is what was allocated in the 2014 Capital Improvement Program budget, though depending on what options are chosen based on feedback gathered at Thursday’s meeting, the final cost could vary.

Work on the pool is projected to be more expensive. Dahms estimated very roughly that work on the pool could cost up to $500,000; that’s what is allocated in the 2014 Capital Improvement Program budget. This estimation includes demolition of the current installation, construction of a new concrete pool deck, a fence, and all of the plumbing required to circulate the water.

Also included in the pool’s budget is a new building to house the pool’s above-ground machinery. Currently, the mechanics are housed in the Phyllis Wheatley Community Center, which previously belonged to the Minneapolis Parks and Recreation Board.

According to Kate Lamers, the Community Center no longer belongs to the city, (they sold it about five years ago to the Phyllis Wheatley Community Center, which had been renting the space). So, they cannot keep the pool’s facilities there and a new housing will need to be constructed. Much of the project’s budget will be going to this new building, though it is currently not part of the budget to also build facilities for public bathrooms or a picnic shelter.

“As money becomes available, we do plan on expanding the mechanical building to fit bathrooms and a shelter, but right now, it’s just not in the budget,” said Lamers.

Lamers told NorthNews “PWCC is usually very generous about letting the kids use the bathroom, but there is no formal agreement or obligation on their part.” MPRB provides a portable bathroom out by the pool.

While many options were discussed in Thursday’s meeting, Lamers said it was simply meant to open the floor for discussion on what the community is looking for and establish facts on what has already been planned. The playground construction is projected to be completed within eight weeks in the summer of 2015, while the pool is expected to be worked on between August and November of 2015 and be completed by the summer of 2016.

Asked if the prject would go ahead for sure, Lamers said, “The playground will move ahead. The message so far from the community is that construction during the summer would be ideal. The pool budget is very tight with the need to do a mechanical building. With construction costs being high, it’s possible, although I wouldn’t call it likely, that we could end up in a situation where we feel that we really can’t cover the basics, which is a reasonbly sized pool. Shade structures and seating can be added later, although we’d certainly like to do them now.”

Both the input of kids and adults will help the Park Board to narrow down a final design to be presented in further meetings on September 30 and October 23. Community members with ideas, questions, or concerns are encouraged to come to those events, 6-8 p.m. at the Heritage Park Community Center, located at 1000 Olson Memorial Highway.