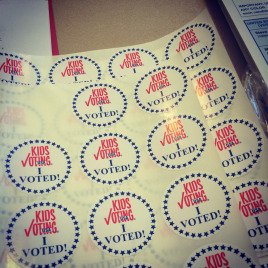 I spent Election Day afternoon handing out kids’ ballots and I Voted stickers to the kids at my polling place. It was pretty quiet, but the kids who did cast ballots in the Kids Voting Minneapolis mock election seemed so proud to be voting just like their parents that I couldn’t help but be glad I was there.

According to Kids Voting Minneapolis, about 50% of young people grow up in non-voting households like I did. I didn’t vote at all until I was in my late twenties, and, as someone who is new to voting, I can tell you that it is intimidating to vote for the first time. That is exactly why I wanted to volunteer with Kids Voting. The goal of the organization is to de-mystify the process for kids in an effort to foster an engaged electorate when they grow up. I believe in this wholeheartedly.

It is important to me that my daughter knows that we are a voting household. We pay attention to politics, and we participate in elections. She is growing up in a household in which politics are frequently discussed and debated. Even so, I realized this year that she had never accompanied us to the polling place. We’d always voted while she was at school or otherwise occupied as a matter of convenience. That changed this year. All three of us cast ballots together this year, and I hope that this is a new tradition will continue for a long time.

I also took the opportunity to share more about the election process with my six-year-old with the book Vote! by Eileen Christelow, which I was delighted to learn was actually inspired by Minnesota’s high voter turnout and early voter education! It is a fun picture book that follows a small town mayoral race from the dog’s eye view. It covers a lot of information, and it would be perfect for a second or third grade classroom. For fourth and fifth grade classrooms, try America Votes by Linda Granfield, which even mentions the Kids Voting organization along with the note that “Statistics show that the Kids Voting program actually increases parent voter turnout by nearly five percent.”

Increasing voter turnout? Getting to see the pride of participation? Encouraging a new generation of civic involvement? These are all great reasons to make volunteering with Kids Voting Minneapolis an Election Day tradition as well.