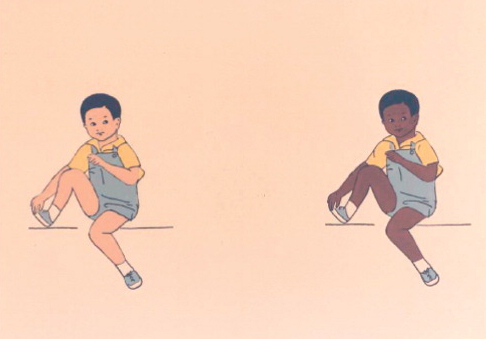 One of the most dramatic moments in Losing Isaiah, a film about a socio-economically oppressed black child who is adopted by a well-off white family, occurs when Isaiah’s older, adopted sister places her white hand next to his brown hand and kindly asks him how their two hands differ. Bravo to the sister for even broaching the topic of race with little Isaiah. If she were a real person (as a opposed to a fictional Hollywood character), she’d be in the minority; a 2007 study found that nonwhite parents are about three times more likely to talk about race with their kids than white parents.[i]My sense is that many adults like to think that young kids are naturally “colorblind” and that pointing out and discussing racial distinctions with kids will somehow bias them. As a result, they just don’t talk about race with the kids they know. In some ways, this is a noble and hopeful approach – but unfortunately it’s misguided. Kids aren’t colorblind.

The children who participated in the study were asked “Which of these is the adult as a child?”, “Which of these is the adult’s child?”, or “Which of these is most similar to the adult?” In other words, the children had to decide which of the two differing features was most relevant. It turns out that the children in all three age groups selected a comparison picture that matched the adult target’s race more often they selected a the picture that matched the adult target’s physique or occupation, although the effect for 3-year olds was less powerful. Despite the fact that all three attributes are conspicuous and socially-relevant, by four years old, most children believe that race is a better predictor of identity than body build or occupation.

So talk to the kids you know about race – at home, in Sunday School, at play dates, on vacation, at school, everywhere.

Here are some tools: