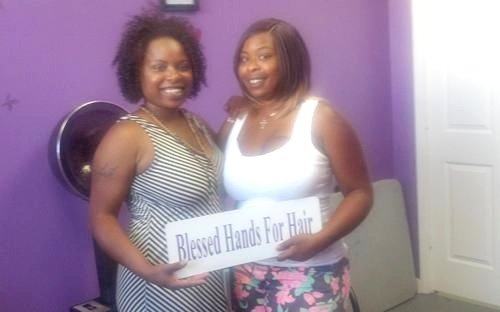 Lakeisha and Mesha Turpin want to raise more than $5,000 for their Blessed Hands for Hair business.

Jim Rettew has a dream of adapting the Amish concept of barn raisings to bring people around the Twin Cities together to rebuild homes, businesses, and lives. With funding from Minnesota Idea Open, he’s working on making that dream a reality that will help homeless veterans, aspiring hairdressers, and many more people in the Twin Cities.

Rettew grew up in Philadelphia near what he calls “Amish Country.” From an early age he was impressed with the strong sense of community among the Amish. In particular, he looked to the tradition of barn raising as an example of community coming together to help each other.

“I always loved the idea that in a weekend, neighbors could come together and build a barn in 72 hours or less,” said Rettew. “It was an awesome spirit of coming together.”

So in 2012 when Rettew applied to the Minnesota Idea Open challenge held by the Minnesota Community Foundation, he decided take the idea of Amish barn raisings to social media.

He won, and this July, Rettew’s vision became reality with the launch of barnraisings.com. On Barnraisings.com all projects are sponsored by a nonprofit organization, and each one has a name, face, and story attached. [Clarification: Rettew’s original proposal for “Multicultural Barn Raisings” evolved into barnraisings.com. Rettow says the money from the Idea Open went to the nonprofit Rebuilding Together, “which supported the development of an online tool to match volunteers with ‘barn raising’ projects.”]

The website allows people to browse projects to find one they connect with and then donate small or large amounts of money or time directly to that project.

Kathy Greiner, the CEO of the nonprofit Rebuilding Together, a partner in the launch of Barnraisings.com, thinks it is the personal attachment to the work that sets Barnraisings apart from traditional nonprofit fundraising efforts.

“People want to know that their money is going to help someone,” explains Greiner. “This is something that is really tangible.”

North Minneapolis sisters Lakeisha and Mesha Turpin are hoping this is the case for their project. In their small one-room salon, the Turpin sisters told their story with lots of laughter and pride. Both sisters have the number “7” tattooed on their arms; this is a nod to their five other siblings (seven total) who have “been through a lot” together.

They attribute their success so far to their strong family. Lakeisha and Mesha own their own hair salon, a long time dream.

Their profile on Barnraisings.com asks for more than $5,000 to help buy materials to move into a bigger space they are hoping to buy. They currently have only one stylist chair and no shampoo tub. They hope that a bigger space would allow them to serve more clients, quit their other jobs, and open a school for other young women hoping to start their own cosmetology business.

One project has been fully funded to date.  That was a ceiling repair for a working mom who recently has been divorced by her husband, diagnosed with cancer, and this winter has undergone brain surgery. This project reached its $1,300 goal through the support of one large donation.

All other donations since the launch of the site in early July, in total, amount to only $710. One project to fix the plumbing and insulation in an elderly veteran’s house is 24% funded. Although the original mission of Barnraisings was not only to fund projects but also to bring people together through volunteer work, only half of the projects ask for volunteers. For example, volunteers could choose to help repair houses for homeless veterans.

Rettew thinks these numbers will pick up as people learn more about the site and begin to trust it as another way to donate money. Rettew stressed that all projects are sponsored by nonprofits that have different measures and systems in place to choose deserving clients. Any nonprofit can sponsor a project. Greiner also believes the volunteering will pick up after the summer when people are done taking time off for vacations.

Greiner stressed that this website is not the only fundraising avenue for Rebuilding Together and that Barnraising is just one of many options for their clients. It is a way to diversify fundraising and bring some new demographics into charitable giving, but this is by no means a project’s last resort.  That being said, for most projects on Barnraisings, the projects must reach their entire goal or they will not get any of the money raised on the website.

At first glance, the mechanisms of Barnraisings may seem like a competition for who is the most in need or most deserving of money.

Rettew, Greiner, and the Turpin sisters do not see it this way. For Rettew, Barnraisings is not about dividing up the pie, but about expanding it. For Greiner, Barnraisings is about the personal story—if you want to support a female-run business, a retired veteran, or someone who has been through cancer, you have all those options and you can choose the one that speaks to you. For the Turpin sisters, it is just about being a part of a community-based effort. Their advice for someone who cannot choose between projects is: “split it up and give a little to everyone!”

For Lakeisha and Mesha Turpin, being a part of a community-funded project comes with a lot of responsibility. They recognize that no one can start a business or achieve success on their own. “Everyone needs somebody” is their motto. They hope donors will let them work for their money by becoming clients of their new and improved hair salon.

Will Barnraising attract more donors? Will it attract new donors, who haven’t been involved with the collaborating non-profits? Could it become the charitable counterpart of Kickstarter? For now, there are nine individuals or families watching closely to see if their story will resonate with the larger online community.

CORRECTION: Additional text at request o fRettew: [Clarification: Rettew’s original proposal for “Multicultural Barn Raisings” evolved into barnraisings.com. Rettow says the money from the Idea Open went to the nonprofit Rebuilding Together, “which supported the development of an online tool to match volunteers with ‘barn raising’ projects.”]