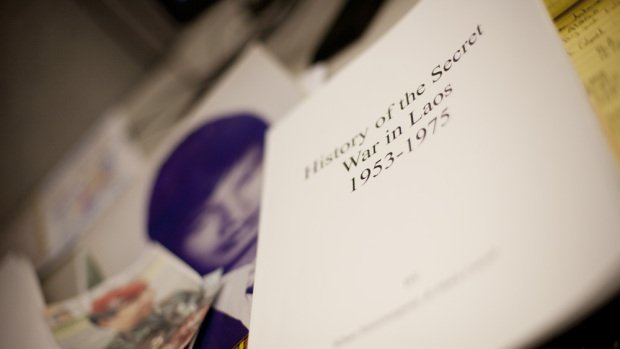 With the creation of a newly independent nation in 1954, the Kingdom of Laos saw the formation of a modern military. The Royal Lao Armed Forces included a Royal Lao Army, Royal Lao Air Force, Royal Lao Navy, and a creation of a national police force; the Royal Lao Police. These branches of the military and police force were composed of young men and women, tasked with defending the newly formed kingdom from enemies, foreign and domestic. Their training, fight, and expertise were to win the long war against perceived Communist aggression in Southeast Asia.

As the war ended, military personnel, government officials, and anyone linked to the former Royal Regime faced an uncertain future. Many had spent time in re-education camps. Many more sought asylum in the refugee camps of Thailand. After years of living in these camps, the refugees of Laos were given passage to America, France, Canada, Australia, Argentina, and other countries for a new life.

I got in contact with Khao Insixiengmay via email. His English, among many other languages, was picked up through his military training. He is a well-known figure in the Twin Cities, being a part of several Lao American organizations and community events. I knew his name, understood his role in the community as the head of a Royal Lao Veterans organization, but never have I put much thought into how many of our elders were in fact veterans of the Secret War. 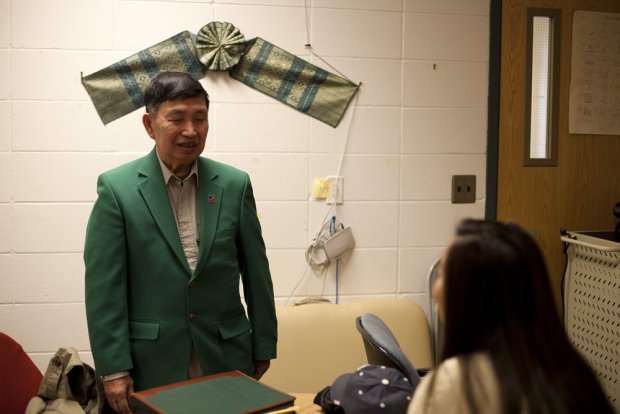 Loong Khao speaks to Yommala of the Lao Assistance Center of Minnesota about his time in the Royal Lao Army, 2014. 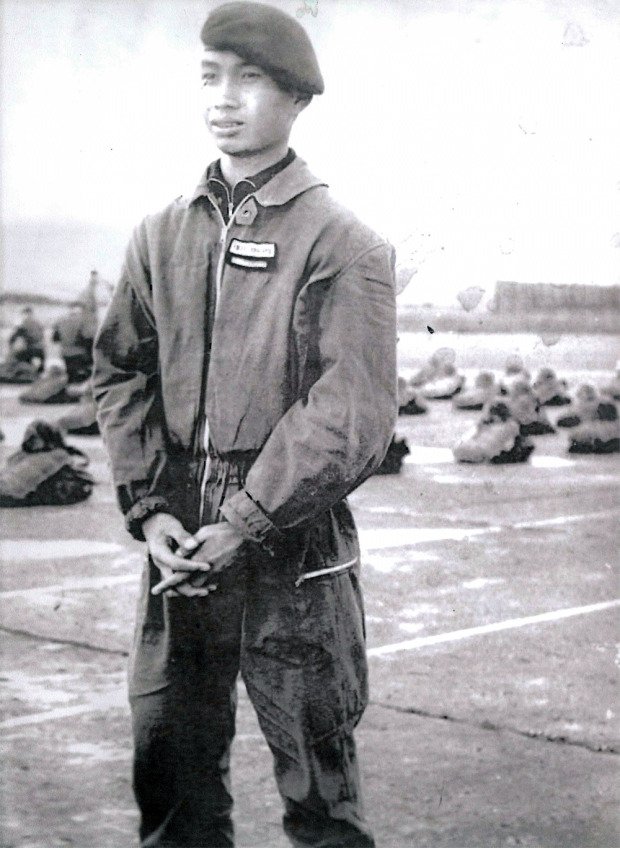 Khao Insixiengmay was born in Savannakhet. He is a grandfatherly man, in his retirement years. He reminded me of my own grandfather, older, round faced, lively, and all knowing. But early in the 1960s, Loong Khao was a young, 18 year old platoon leader. At first, he commanded a platoon of 30-35 soldiers, ending his career as a battalion commander of hundreds of troops. As he rose through the ranks of the Royal Lao Army (RLA), reaching the rank of Colonel, he gained knowledge and experience that made him well regarded in his profession. He spoke of his tactical efforts in the war, ambushing tanks, fighting in the battle of Khong Sedone, and other arenas of warfare. He was a highly proficient military leader. 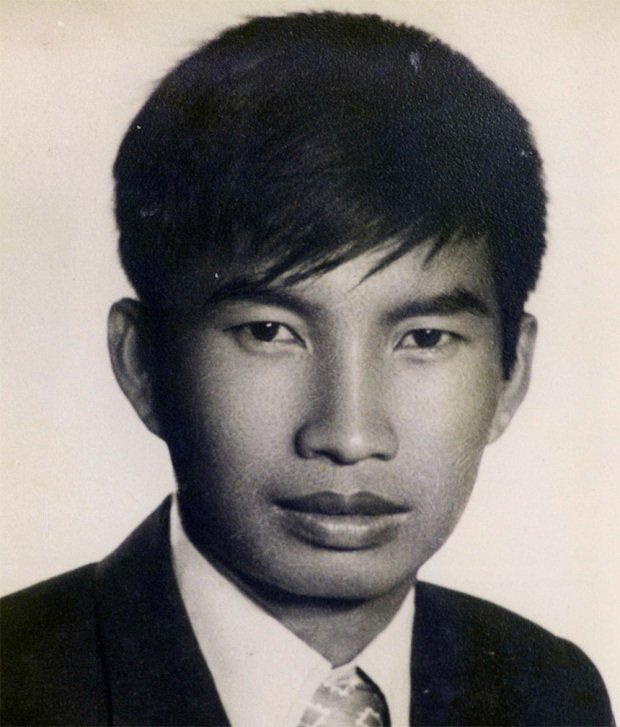 A 32-year old Khao Insixiengmay. The picture was taken in 1975 as the war was winding down. Loong Khao stated that he had his portrait taken because of the uncertain future of a post-war Laos.

I mainly asked Loong Khao about his training and experience as a soldier and officer. I was interested in knowing about his training, his efforts during the war, and also what he is doing now. The interview was brief, he was to pick up his grand-kids from school in an hour. Loong Khao spoke about his recent work first, about the importance of recognizing the valiant fight of our Royal Lao veterans. He stated that while many of us are not soldiers, we came from soldiers. The reason why we are here today, according to Loong Khao, is because of the soldier.

The training he received was world class. Western powers were absolute in their fight against Communism, with President Eisenhower coining the term “Domino Theory” to justify US action in Indochina. Action ranged from full military support in South Vietnam to military training and advisory in Laos. Thus, Loong Khao and many officers of his generation were flown to foreign military bases for training in conventional warfare. His career took him to Lackland Airforce Base in San Antonio, Texas, Fort Benning, Georgia for Infantry training, Fort Knox, Kentucky for Armor training, airborne training in France, and various places in Thailand, Australia, and South Korea. 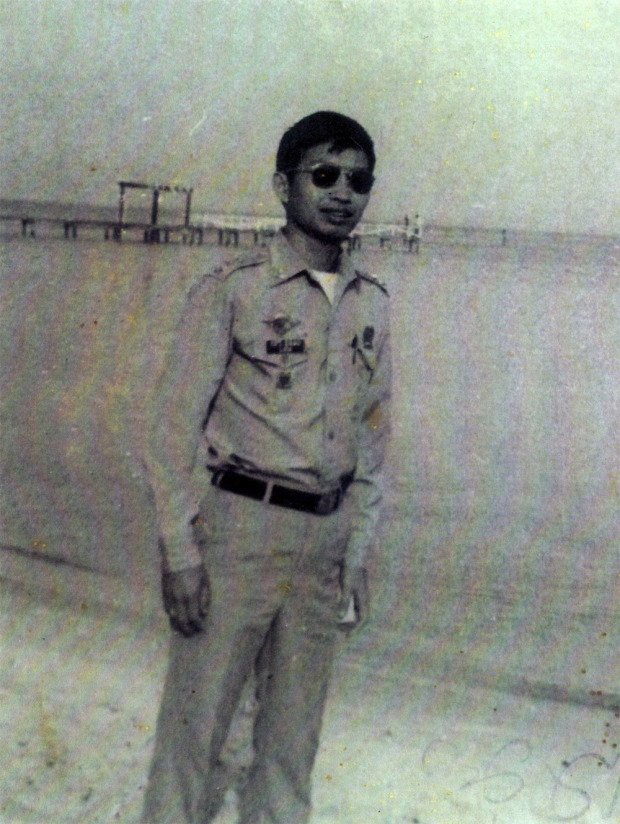 A quick vacation in Florida, during his training at the United States Army Infantry School at Fort Benning, Georgia, Loong Khao stands in his service uniform, 1971.

As a young Lieutenant, Loong Khao did not think he was particularly special in regards to being a soldier. He had hoped to be an English teacher but instead was trained as a military officer. Multiple times Loong Khao stated that he was not brave, but more that he was in situations that forced him to be brave. He explained that he had no way out; that it was either to fight or die, so he did the best he could in every situation. Loong Khao retold a chilling memory of when he was caught by North Vietnamese troops after being shot. He was tied up with a telephone wire as a young 19-year old army officer for over two weeks. The telephone wire was tied so tight that he has lasting scars from the incident, 51 years later. 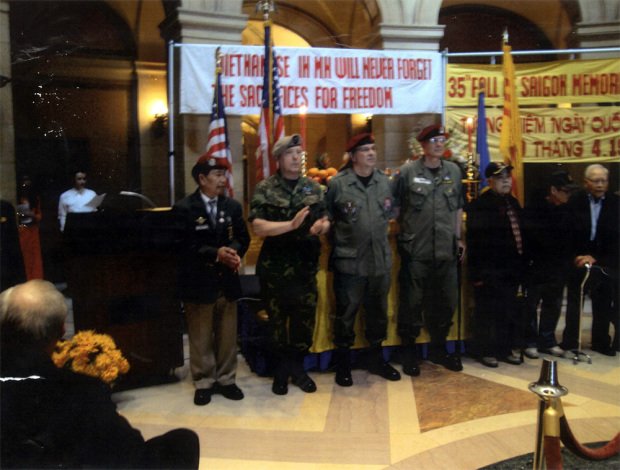 Currently, and most importantly, Loong Khao is working on getting an official recognition for Royal Lao veterans as US veterans. Many Lao and Hmong veterans served as a surrogate army for the United States. The Geneva Agreements in 1962 dictated that Laos was a neutral country during the Vietnam War. Military personnel, whether French, American, or Vietnamese, were not allowed to be present in Laos[i]. Instead, the United States via the Central Intelligence Agency (CIA) opted to train both the Royal Lao Armed Forces and Hmong and Lao guerrilla fighters. Thus, American involvement in Laos forever shaped the destiny of thousands of Lao people from past to present. It is because of the Secret War, the efforts of American and Lao veterans, do Lao Americans have a continuing legacy in this country today.

Loong Khao was optimistic that his efforts would eventually lead to official recognition by the US government of Lao veteran war efforts over 40 years ago. But he was also saddened in thinking his efforts maybe fruitless, outlining that the older congressmen that served during the Vietnam War are dying or retiring. Younger politicians, the daughters and sons of American Vietnam War Veterans, have no real connection to the war. These politicians do not know the contributions that Lao and Hmong veterans had in the American war efforts in Southeast Asia. He stressed how ignored his cause feels. I was sympathetic to his cause. I had always known how the war ended and how our fathers, mothers, grandparents sacrificed a lot in the effort. But I sometimes forget the people that were born during the war, fought during the war, and lived during the war, still are alive today. They still have their memories and contributions. It is a bit shameful to think that I can easily forget. 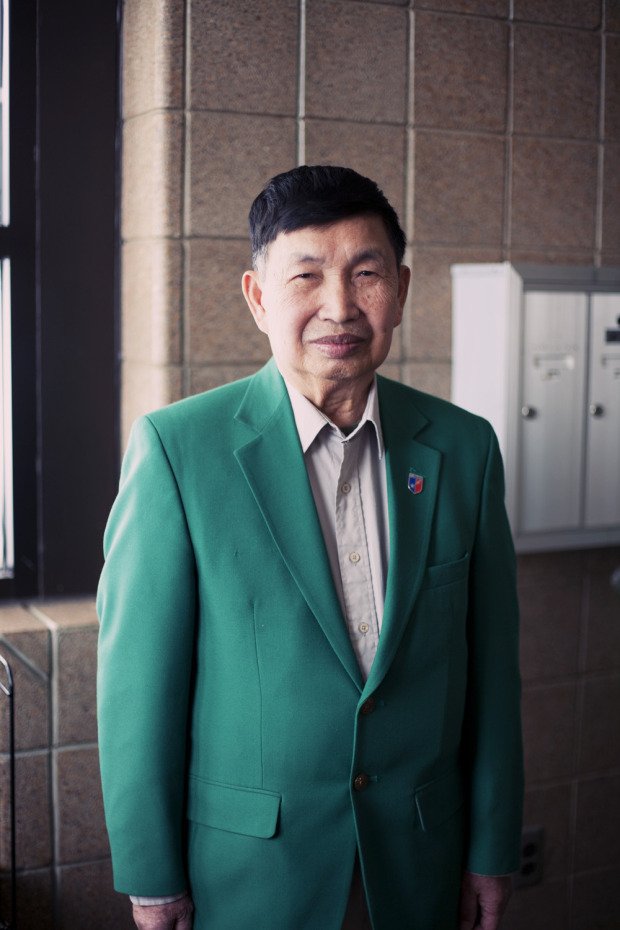 The one item I wished I had time to ask Loong Khao was if he had ever imagine if he would ever end up in America, since he had come to the States for training. Surely, our veterans had never imagined as young fighters to be on the losing end of a war. They and their families could not have imagined being refugees in a new country. I often wonder of my own parents, if they had ever imagined when they were children to be living in America as adults. But I remember one thing that Loong Khao had mentioned. He often did not have a choice, his country was at war. The outcome of that war gave thousands of Hmong, Lao, Khmer, and Vietnamese families no choice but to become refugees. It is important to remember that fact, that our families had no other choice but to leave their homes. Likewise, there was no choice to but settle here in the US and build communities.

At top: Khao Insixiengmay and Mark Carrol’s “History of the Secret War in Laos 1953-1975″, booklets given to inform policy makers, decision makers, and the curious on the unknown civil war in Laos.