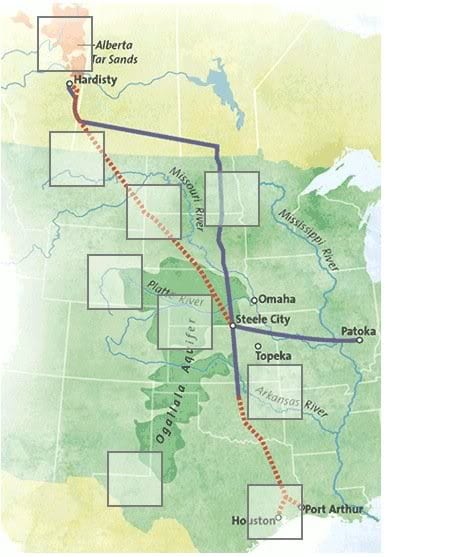 I was running an information table at a public event Saturday like I did a bunch of times this summer and Fall for my senate district DFL. This was for OFA and the Hayden campaign for the special election Tuesday, though I doubt that makes a difference regarding my point. Well, maybe it does, because I was trying to help President Obama get reelected and that’s where I’m going with this. I’m specifically getting to the Keystone XL pipeline. Here’s some background.

A couple people mentioned the Keystone XL pipeline to me, and it’s come up at other events. They put it in terms of being discouraged Democrats who would get enthused again if the president would stop the pipeline. It’s just a few people and it’s anecdotal, all the proper caveats apply, however, the point of these events is to contact the public and get a feel for what they’re thinking. That’s why it’s important that they mentioned Keystone without being prompted.

I have a bias because I’m against the project too. So I might well explain away opinions I found inconvenient and jump to highlight those I support. Just admitting that up front. I’d rely on polling data if I had it. I haven’t heard of any. All I have are anecdotes. However, all those anecdotes point the same way, that Keystone is a big issue to discouraged Democrats, and that stopping it, whatever the other consequences, would help Obama fill the phone banks.

It would be good policy too to stop this thing. The bits of my brain that I think are working rationally came to that conclusion, though they may be influenced by a moral factor, specifically, the deliberately abusive treatment to the first people arrested at the the Keystone protest at the White House in August:

Since there was not enough room for everyone to sit, even on the floor, we rotated standing and sitting.
…
I expected the proverbial bread and water, but even this proved wishful thinking. Twice a day, the guards brought one bologna or cheese sandwich for us to eat and a small cup of water to drink. The first sandwich was so foul, I didn’t finish it or eat anything else for the next two days. There was water from the sink, but even the guards couldn’t agree whether it was potable. I drank it anyway, fearing dehydration more than sickness.
…
It was clear we should not trifle with the U.S. marshals. While being frisked, one member of our group chuckled. Bad idea. A marshal barked at him, “Stop laughing! I don’t care if you’re a protester – I’ll beat your f***ing @$$!”

My use of the word “deliberate”? From Bill McKibben, one of the protest organizers:

The police, surprised by how many people turned out on the first day of two weeks of protests at the White House, decided to teach us a lesson. As they told our legal team, they wanted to deter anyone else from coming — and so with our first crew they were… kind of harsh.

Yes, it was on purpose that peaceful protesters were essentially unfed for three days, left often without drinkable water, kept so crowded they had to take turns standing, and threatened with a beating. There’s a certain moral logic that says if such measures are taken against a peaceful protest, what they’re protesting must be awful. Real logic says their treatment and their policy position have no connection, but would anyone really want to be the Keystone lobbyist at that point?

OK, would any decent people not taking a big salary to screw up other people’s lives want to be that lobbyist at that point? Just to be more precise.

Not that this was the first protest. Residents of the states through which the pipeline will pass have been organizing. According to panelists at a Netroots panel I attended on this pipeline, they’ve been able to organize opposition among conservatives who think “environment” is a dirty word. Literally, they avoid “environment” because they’ll lose support if that word comes up. Nonetheless they’re making progress, and this project is unpopular. Know what else is unpopular in those states? President Obama. Here’s a chance to get more popular. Enough to win those states in the election? Probably not, but maybe getting closer will help some Democrat down the ballot, and even win that one Nebraska electoral vote again.

So in one move, the president could make a smart policy decision, win back discouraged supporters, and improve his standing in the affected states. Even discouraged supporters not specifically tuned in on this issue are bound to notice that the environmentalists made their case and were listened to. Obama’s record will still be mixed, but the mix will have just gotten greener. Conservatives will be upset (other than those who almost had the pipeline go through their land and water supply), but that’s probably a sign Obama did the right thing.