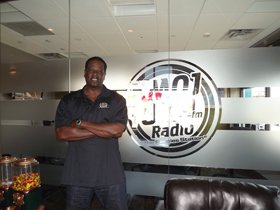 As listeners of KMOJ (89.9 FM), we know Shed G. and Freddie Bell … we know Lisa Moy, Walter “Q Bear” Banks, Jr. and Big Sam; but who most don’t know is Kelvin Quarles.

Many don’t know Quarles because he doesn’t have a daily show and his voice isn’t the one we hear during drive times or during Tight at Night – the station’s programming devoted to contemporary hip-hop. But the people who work and volunteer at KMOJ know Quarles – he’s their boss.

Celebrating his 10th anniversary with Minnesota’s only station geared towards a Black audience, Quarles is the general manager at KMOJ, affectionately known as “The People’s Station.”

A lot has changed since that day. For starters, KMOJ went from a paltry 750 watts of broadcast strength to its current 6,300 watts. Where before only a select few could pick up the non-commercial station, now the programming on KMOJ can be heard as far east as Woodbury and as far south as Shakopee.

“Our goal is to sound as clear as the other stations in the market,” said Quarles, who came to KMOJ from Atlanta on the suggestion of his late mentor, Dr. Jerry Boulding.

And the station ditched its uptown offices for residency in the Five Points Building at the corner of Penn Avenue and Broadway in the heart of north Minneapolis.

“It’s all about being connected to the community,” said Quarles, on the decision to relocate. “In radio, you can have a location anywhere and be connected, but being in north Minneapolis is something that helps us appreciate what we do that much more.”

Quarles said much of that appreciation for the community comes from knowing the roots of KMOJ.

“Nearly 40 years ago KMOJ rose front the projects of north Minneapolis in what’s now the Heritage Park Neighborhood,” said the station’s G.M. “People have been sticking with this station for almost 40 years. I always tell our staff, none of us is bigger than the station. Our responsibility is to uphold the legacy of this station.

According to the station’s general manager another responsibility is to its employees and volunteers.

“One of the rewards for me is watching the people here who work hard and excel,” said Quarles. “We have a huge responsibility to teach the craft of radio. We have people who literally come off the street and say, “Oh, I want to be on the radio.'”

KMOJ has only six fulltime employees, with many working at the station as volunteers or outside contractors.

Looking to the future, Quarles said the station has plans on expanding beyond radio into other mediums of communication.

“KMOJ is pretty much where we want to be (as a radio station) so we’re looking to focus on TV, Internet and growing the radio audience,” said Quarles. “Our goal is to find multiple mediums where our people can learn and grow. We’re looking at ways to bring in more people to mentor and train, but with KMOJ we just don’t have the room or capacity, so we’re looking to expand into these other mediums.”