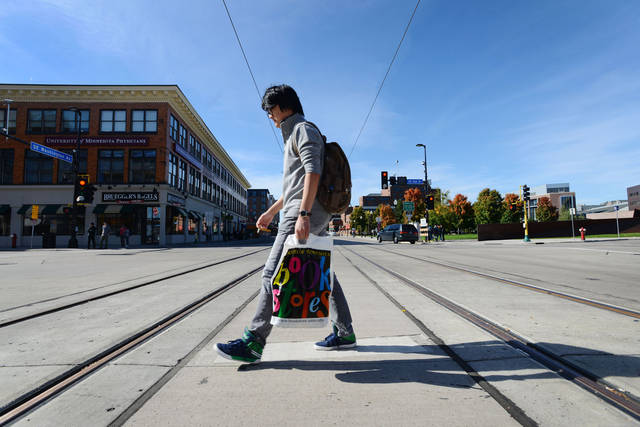 A pedestrian crosses the light rail tracks on the intersection of Oak Street and Washington Avenue on Monday, Oct. 7, 2013. The line is slated for completion in 2014. (Photo by Amanda Snyder)

Graduate student Jonathan Hill walked across the light rail tracks on Washington Avenue and Church Street Southeast on Monday with his earphones in and his head down.

Experts say the light rail is more dangerous than other forms of transportation because it takes longer to stop and runs on street level. Come mid-2014, the Central Corridor light rail, or the Green Line, will cruise through the University of Minnesota at about 20 mph and across the Washington Avenue Bridge at up to 50 mph.

“I could definitely see that being a potential issue,” Hill said. “There are a lot of people here. That’s a problem, people walking with headphones.”

Since it began running in 2004, Metro Transit’s Hiawatha light rail — now rebranded the Blue Line — has had 75 incidents with nine deaths. Most of these were vehicle accidents, but almost a fourth of the 21 pedestrian accidents were fatal.

Metro Transit spokesman John Siqveland said the Green and Blue Lines were built with safety in mind and that the Green Line will generally run slower since it will travel through more densely populated areas.

The vast majority of light-rail and streetcar systems around the country run on street level, Siqveland said.

Since the Blue Line opened in June 2004, the agency’s buses have had 6,979 incidents, which resulted in five deaths. Like the light rail, the majority of collisions involved motor vehicles. Of the 145 bus incidents involving pedestrians, four were fatal.

“Buses serve a lot more people and run a lot more miles … but have fewer fatalities,” Levinson said. “The [fatality] rates are obviously much higher for light-rail trains. Still, it’s a lot safer than driving a car.”

The 11-mile light-rail route connecting downtown Minneapolis to downtown St. Paul is decades in the making and cost $957 million.

“It’s been built, so it’s too late. It’s an at-grade light-rail facility — there’s nothing we can do about it without spending another billion dollars,” Levinson said. “We don’t operate in this world to maximize safety and only safety; we have trade-offs.”

Each train weighs about 300,000 pounds, and bringing one to a complete stop from 55 mph takes the length of two football fields. At 20 mph, it takes 81 feet, Siqveland said.

“It doesn’t have the option to swerve out of the way of someone in the way,” Zitzow said. “The difference here is that most vehicles can maneuver much more than a light rail, which is stuck.”

Baenen said the Metropolitan Council has taken many safety considerations, including creating a pedestrian mall and using posters and community educators.

Baenen said a street-level light-rail track is less costly than an underground or elevated one, which was “prohibitively expensive.”

Siqveland said part of the Metro Transit safety campaign will have links to its website posted at every train stop.

When asked if he’d visit the website, graduate student Hill said he most likely wouldn’t.

“If I am an example,” he said, “[other students] probably will not.”