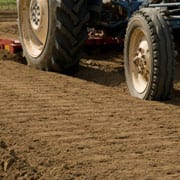 Growing up on the farm, I quickly learned that the dirt encrusting winter snow banks came from our fields. It didn’t particularly bother me only because I didn’t understand that topsoil was our livelihood. That changed as I aged. Consequently, when my parents began altering their tillage practices and more soil stayed in the field, I understood their decision. While it seems obvious, the basic idea bears repeating; the soil should stay in the field.

Soil erosion is a natural process but we don’t have to speed the effort. Recently, the Environmental Working Group, a nonprofit environmental information and advocacy organization, released a report linking a 2007 USDA survey to larger agricultural and conservation policy ramifications. The EWG noted improvement in soil erosion mitigation efforts; they’re deeply concerned, however, those efforts aren’t enough.

The EWG’s report only examines Iowa data. But, Minnesota shares a border with Iowa and a significant amount of upstream mileage on shared rivers. Iowa, as both the USDA’s Natural Resources Conservation Service (NRCS) and EWG demonstrate, has a conservation challenge that Minnesota does not. However, Iowa’s lessons are Minnesota’s lessons.

Iowa is still washing a fair amount of topsoil toward the Gulf of Mexico. Not as much as in 1982 when NRCS’s longitudinal study began, but enough for EWG to observe that Iowa has a much larger and more significant soil erosion problem than Iowa is willing to acknowledge. Iowa erosion levels, EWG asserts, are not sustainable. The federal soil loss sustainability standard is 5 tons per acre per year. The NRCS inventory finds that Iowa loses an average of 5.2 tons per acre per year. EWG’s research report suggests doubling that figure. Ten tons a year is a lot of soil.

The policy kicker? From 1997 to 2009, Iowa received $17 billion in agricultural subsidies but less than $3 billion in conservation support. Farming practices that trade long-term operational sustainability for short-term productivity and profit negates farming’s elemental stewardship responsibility. That’s what separates farmers from slash-and-burn hunter-gatherers. It was as true 10,000 years ago as it is today.

Agriculture and food processing constitute significant chunks of Minnesota’s economy, important elements in Minnesota’s extractive industries. We’re not going to ever stop farming. Responsible stewardship and smart conservation policy are inseparable. Public investment should follow that dictate. If we do it right, we leave something better for the next generation.