Yesterday in a meeting on Ayd Mill Road there was great unity in the room on one goal: only vehicles going to or from home or work or a destination should be in our community, otherwise those vehicles should stay on the freeway.

MNDOT majorly mucked up in that there is not a connection from 35E coming from the south going to 94 west. There are not even signs directing commuters to exit on 106C on East 11th, cross the bridge and then enter back on the other side of the freeway.

Traffic managers have made a fuss about people not wanting to go an extra 3/4 mile. That is not true. I would go that way from working in Eagan if only there was an easy merge. Traffic managers never worked on this idea because they assumed that they could force St Paul into opening up Ayd Mill road for 4 lane high-density traffic. There is a heavy freeway demand that has been displaced onto city streets.

The reason we are having Ayd Mill problems is that MNDOT didn’t build the proper freeway interchange!

Right now the fight is between which neighborhoods get to host the commute traffic on city roads. Bleep Bleep traffic officials are hoping that if they make our city traffic miserable enough that we will let them turn Ayd Mill into a freeway. SIx lanes of traffic come North out of Eagan and would love to overfill an improved route that we give them. We can’t build enough roads to satisfy Eagan and we shouldn’t have to. There should be a 35E/94 west connection built with state dollars, not our city dollars and roads being used for the Eagan commute. 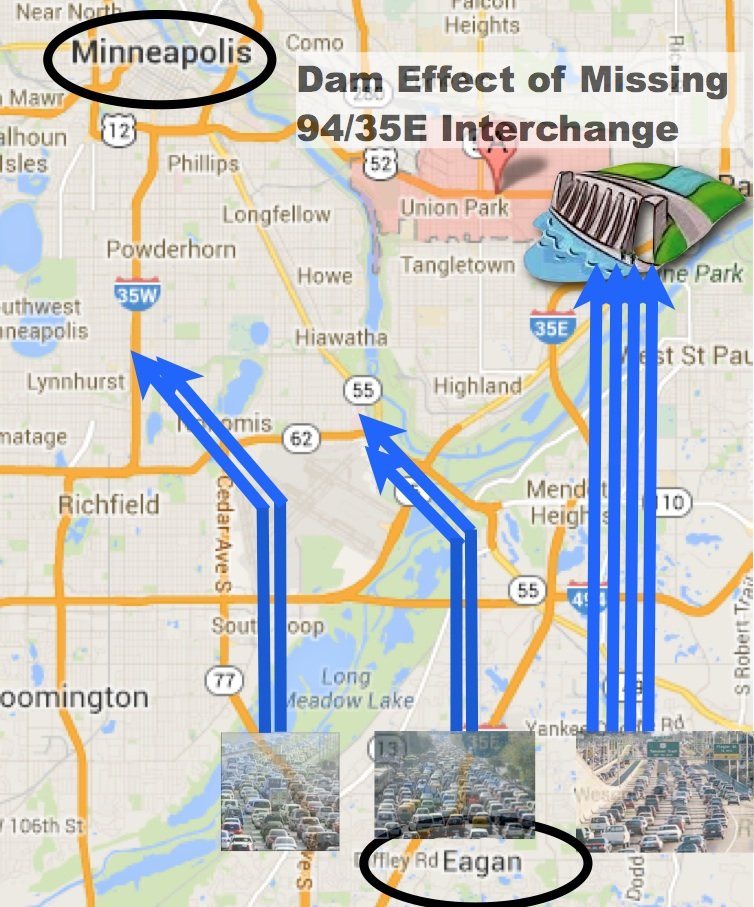 Shame on those who tried to pit various Union Park neighborhoods against each other. For example the Hamline bridge rebuild is routing Ayd Mill traffic onto Snelling and Selby. And then certain people say that developing Ayd Mill more is INEVITABLE. That is lie. Obviously the city council has listened to the neighborhoods because the city council members know that this an issue that motivates people to organize and vote. Only the city planning commission and mayor won’t listen to the neighborhoods. Already several parallel paths are being activated. Neighbors First is back up. People are not even trusting the Union Park board, since certain members are using words like “inevitable”.

Flawed concepts like “relief” are being used when there are 4 lanes of 35E Eagan traffic looking for an outlet north. The lessons of attracted traffic is that the more you build and the better you make it, the worst that your traffic problems will become. Build more and you will have twice the original problem. Berkeley proved the concept of attracted traffic using the hard way. St Paul usually learns from other cities’ mistakes.

Fortunately one of our city traffic engineers gave us the solution. He said that traffic is like water, it looks for the easiest fastest route. That means that we should make the commute from Eagan to Minneapolis using city roads as hideous as possible and then the vehicles will stay on the freeway. I am sure that our experts can figure out ways to make sure that does happen. I have a few ideas of my own.

First of all we need to establish the correct route. We should up good signage on 35E/94 west connections that we have through downtown streets. Downtown needs traffic and business, so this is a good thing. Our St Paul representatives and senators have to really pressure MNDOT to give a high priority to building a real 35E/94 west merge.

Ideas on keeping the Eagan commuters on the freeway:

This may seem harsh but remember that Suburbia builds cul-de-sacs to do the same thing. We just to have change the priorities of our city traffic engineers to protect neighbor traffic and not facilitate commute traffic. We can do this. We can divert the “water flow” of commuters back on the freeways. We can save wear and tear on our roads. We can save huge amounts of money by leaving Ayd Mill alone and letting the state spend the money on the proper l 35E/94 west merge.

This is a win/win/win for all of our neighborhoods, for our local traffic and for our budget.