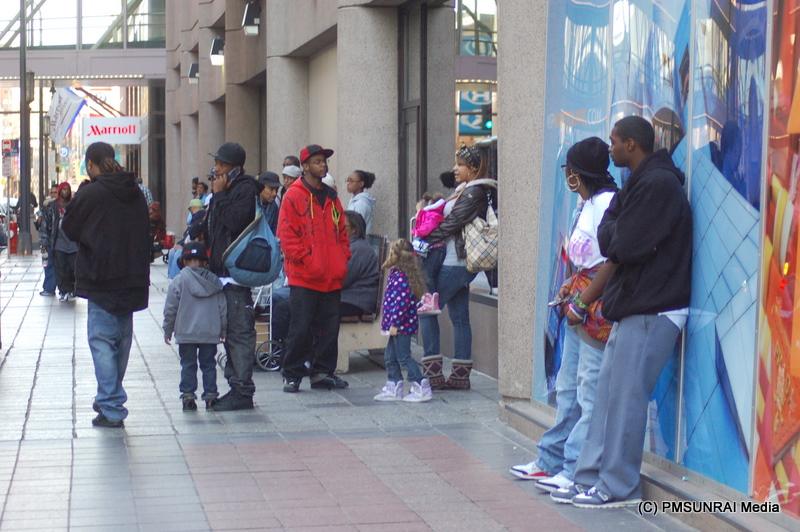 7th & Nicollet bus stop, serving Routes 5, 19 and 22. This bus stop has the highest passenger use regionwide

Students for Transit Equality is a recently formed group of University of Minnesota School of Social Work students who are concerned about racial and economic inequalities in Twin Cities transit and transit planning. The purpose of this information campaign is to draw community awareness and publicity to the lack of any bus shelter at the bus stop at 7th & Nicollet. This bus stop is primarily used by buses bound for North Minneapolis and Brooklyn Park and Brooklyn Center. Despite being the most used bus stop region wide, this stop has no bus shelter or any other amenities. Meanwhile, bus stops on the Bus Rapid Transit routes of Marquette and 2nd Avenue, serving primarily suburban commuters, are equipped with heated and lit bus shelters, real-time arrival displays and large transit maps.

The City of Minneapolis has slowly realized this inequality and has begun planning for a East-West Transit Spine through downtown Minneapolis, which will potentially equip all bus stops along 7th and 8th Streets with bus shelters. While time for input to this plan is upon us, little community awareness or information has been provided by the City of Minneapolis. In response to this our group, Students for Transit Equality, is raising community awareness about this issue and the need for community input and pressure.

On Monday, Dec., 13th from 4 – 6 pm at the Minneapolis Central Library is an Open House where community members can provide input on the planning of this transit spine and keep the City of Minneapolis accountable for providing equal transit amenities. Attached is a flier about this issue and the upcoming meeting. It is important to build community awareness about this issue and to have community stakeholders present at this meeting in order to put pressure on the City of Minneapolis to follow through with their commitments. Please use this information and attached flier in any way to build awareness of this issue for transit equality.