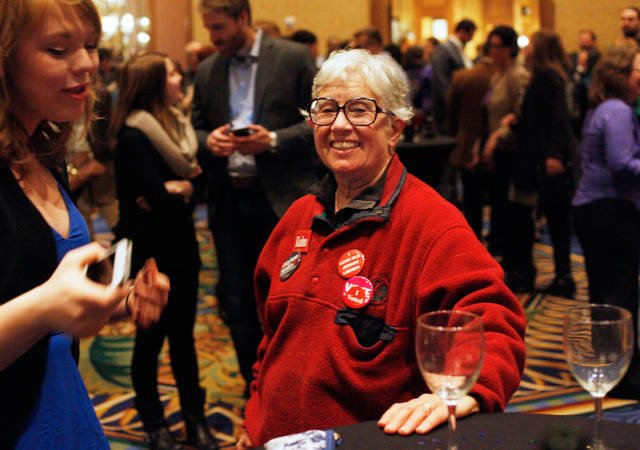 (Photo by Elizabeth Brumley) Phyllis Kahn mingles at the Minneapolis Hilton on Nov. 4, 2014. Kahn will serve her 22nd term as Minnesota’s representative for District 60B, as she was re-elected Nov. 4.

“I kind of expected [Tuesday’s victory],” she said.

Though the 42-year incumbent officially won the District 60B seat in the Minnesota House of Representatives on Tuesday with nearly 77 percent of the vote, the Democratic-Farmer-Labor legislator faced her toughest challenge in August’s primary election.

On Tuesday, Kahn defeated Republican challenger Abdimalik Askar for the seat, which represents the University of Minnesota, Cedar-Riverside and other east Minneapolis neighborhoods.

“I was not too surprised,” Askar said. “I know the area was DFL, but I tried my best and I worked hard.”

In the primary election, Kahn went head-to-head with Somali-born Democrat Mohamud Noor, who drew a large following in the district, where nearly a quarter of the residents are Somali.

“I have terrific support in the Somali community,” Kahn said. “I think I have very good results throughout the district.”

Though Askar’s presence in the election seemed quiet, he dedicated 50 hours per week to campaigning, adding that he felt strong student support when canvassing the district.

“When I was door-knocking, I said, ‘My opponent held [her] seat for 42 years,’ and everyone was surprised — especially University students,” he said. “They said, ‘This is the time we need change,’ and they’re excited. They welcome that.”

Constituents voiced a similar sentiment during the Kahn-Noor battle earlier this year. Noor supporters said the district was in need of new representation and he was right for the change.

Both Kahn and Askar previously told the Minnesota Daily that the biggest issue facing the district is increasing the state’s support for the University and reducing costs to students.

“I totally believe in a higher budget and bigger appropriations for the University,” Kahn previously told the Daily.

Kahn, who lives on Nicollet Island, is married to a University professor, and she has led the Minnesota Clean Indoor Air Act into law and served as an advocate for gender quality throughout her many decades at the state Capitol.

Among serving as a leader for other issues, she chairs the House’s Legacy Committee.

But Larry Jacobs, director of the University’s Center for the Study of Politics and Governance, said party loyalty outweighs candidates’ platforms when voters are filling out ballots.

Engineering freshman Michael Sidell was among those voters who chose DFL candidates across the board.

Though the race was seemingly decided months ago, Kahn said she didn’t bank on the victory, or let up on campaigning, until the final hour.

“You always should work for an election as if you’re two votes behind,” she said.