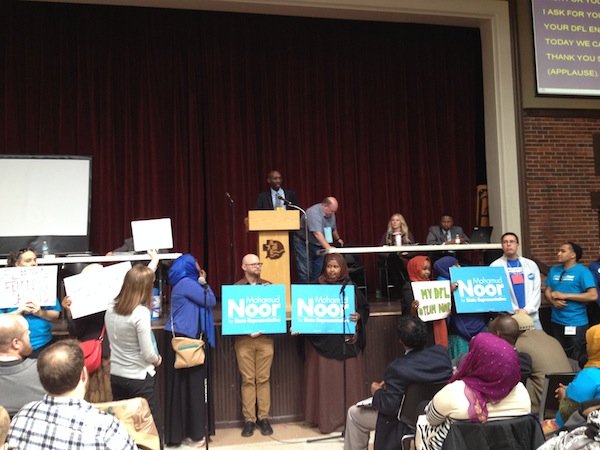 Longtime State Representative Phyllis Kahn lost out on a DFL endorsement at the 2014 Senate District 60 Endorsing Convention on April 5, as Somali candidate and current school board member Mohamud Noor brought enough delegates to keep her vote total below the 60 percent needed for endorsement. The convention at De La Salle High School, which lasted nearly 10 hours, ended without an endorsement of either candidate, leaving them both to vie against each other in the August primary.

Kahn is currently serving her 21st term in the state legislature, serving as chair of the Legacy Committee in addition to sitting on numerous other committees. She’s perhaps best known for being the chief author of Minnesota’s smoking ban.

Noor currently serves on the Minneapolis School Board, where he was appointed to the late Hussein Samatar’s seat in December. Noor previously ran for the Minnesota State Senate seat now held by Kari Dziedzic, who narrowly beat him in the 2011 primary.

Somali City Council member Abdi Warsame, who was elected in 2013, worked on Noor’s 2011 campaign, but in this race has supported Phyllis Kahn, who lent her support to him during his campaign. [See sidebar about Warsame’s role at the convention.]

“She has the experience,” Warsame said. “She cares about the community. I’ve seen her work — she is dedicated to her task.” Warsame said he met Kahn a couple of years ago when she was helping elders who were having issues with housing. “She supported my campaign from the beginning,” he said. “We’ve had a good relationship for a number of years. She’s one of the brightest toughest ladies that I know.”

The convention followed a controversial February 4 precinct caucus at the Brian Coyle Center, which erupted in violence, sending Ilhan Omar, a DFL organizer and aide to City Council member Andrew Johnson, to the hospital. That caucus was halted and reconvened later that month at Coffman Union. Noor won a majority of the caucus delegates from that precinct.

“Other people have their hands in that process,” Omar said. “It’s either being delayed or potentially being messed with so we don’t get the resolution. I hope justice prevails.”

Omar served as Vice Chair of the Senate District 60 Endorsing Convention on Saturday, making sure that everything ran smoothly, which included details such as proper signage and setting up prayer rooms for the Somali delegates. Still, several issues emerged in the seating of the delegates, such as an entire page that listed the female alternate delegates from a precinct in Seward gone missing.

“There are a slew of people not showing up as delegates or alternates,” Omar said, “or they think they are a delegate and are slated as alternates.”

Then there were the delegates from the reconvened caucus at Coffman Union, which produced 28 Noor delegates and 15 Kahn delegates. According to Peggy Clark, who was on the credentials committee, the state party had taken control of the documents and entered all the data in their offices in Saint Paul, providing the credentials committee with photocopied sheets of the sub caucus participants. “We don’t actually know who — someone was on the floor writing them or helping people write them — I’m not sure who wrote them up,” Clark said. “The campaigns came to the table and said, ‘We didn’t write this.’ So we don’t know who wrote them.” However, the photocopied list was the official paperwork that the committee had. According to Clark, there was one person the Kahn campaign believed showed up and was elected to be a delegate, but didn’t show up on the list. “What can you do? You have to go with the paperwork, which is why you have to do a better job down the line.”

“We have growing pains within the DFL itself,” Clark said. “We have to be able to explain the process thoroughly to all of these new constituents we have.” In addition, the DFL needs to be able to explain to people running the caucus how important the paperwork is, she said, “to get their actual legal names down and full addresses with apartments and things like that, because we have to verify their information that they’re giving to us at caucus against the Secretary of State data or other data we have to match it up. We have to figure out a way to educate the leaders in the Somali community and other immigrant communities that will be leading these events and meetings to make everything flow smoothly.”

During the first couple of hours, Amran Ahmed was in the hallways outside the main floor helping elders get situated. Though she was there as a delegate, she said she has a mentality to want to help things go easier for people.

“Obviously, there’s a lot of miscommunication,” she said. “It’s well organized but I can do little things to make it better. I do what I can.” A graduate at the University of Minnesota, Ahmed, who was born in Somalia, is currently pursuing her Masters in Nursing, and previously attended the caucus at Coffman Union. “It was so empowering to see the elder generation to come out to vote,” she said. “I want to contribute to that and be part of that voting citizens. So that’s why I’m here today.”

Nancy Black, president of the statewide Inter Faculty Organization at MNSCU, said the convention was the second time she’s been a delegate. “It’s been an interesting process,” she said. “I wanted to be a part of it.” Black is a strong supporter of Kahn. “She was a leader for women at a time when it wasn’t popular,” she said. “She’s very courageous in her stances. She’s never afraid to say what she really believes.” According to Black, Kahn has been responsive about issues surrounding pensions, and “is sympathetic to working people.”

Tom Weist, another Kahn supporter, said she was always accessible, and he receives regular email updates from her.

Andrew Orrison was “leaning toward Kahn” at about halfway through the day, though he acknowledged that both candidates had good prospects. “I like her experience and depth of knowledge,” he said. “She knows exactly what she’s doing.” Orrison expressed frustration at how the convention was going. “It could be going better,” he said.

Daniel Yang, Director of Organizing and Community Building at the Native American Community Development Institute, attended the convention as an observer. “I met Mohamud in the Senate race,” he said. “He’s been involved with the party for a long time. One of the most difficult issues facing the party is that elected officials don’t reflect the community. The party needs to support emerging leaders. Noor is an amazingly intelligent guy.”

Mubashir Jeilani, from the Cedar Riverside Youth-Council, said he’s supporting Kahn. “We know Phyllis and she knows us. She’s working with us to expand opportunities at the Brian Coyle Center.” According to Jeilani, Kahn campaigned with the council during the last election, and was supportive in redistricting. “She’s a good hard working legislator and we should keep her,” he said.

Even as the day wore on, both campaigns worked hard to keep up spirits by ordering pizza and other snacks for their delegates. In addition, the Kahn campaign had volunteers stationed by the outside doors to encourage people not leave. After a 20-minute prayer break between 5:30 and 5:50, the fifth ballot was cast.

“It’s exciting to see the immigrant community participating in the process,” said Yahye Mohamed, a community organizer and Noor supporter who was at the convention as an observer.

“I’m hoping for no endorsement,” said Abdirizak Bihi, a Noor supporter. “No endorsement is not that bad.”

His wish came true, as in the end, the meeting was adjourned with no endorsement. Kahn’s response to the events of the day was to say that it showed democracy at it’s best. “It’s nice to see this enthusiasm for democracy,” she said.

Noor, meanwhile, said he was excited. “This proves that grassroots organizing can make the difference,” he said.