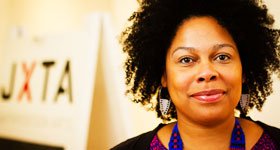 The WBC and Juxtaposition (JXTA) became interested in attending the conference together due to the increasing success of the WBC’s West Broadway Farmers Market, Holiday Pop Up Boutiques, and JXTA’s growing campus and placemaking work. Mutual partners connected them with Council Member Cano, whose ward includes the Midtown Farmers Market; CM Cano and is very invested in strengthening the city of Minneapolis’ funding and policy efforts to better support public market infrastructure and development.

“There is currently a boom of creative placemaking activities emanating from Minnesota and markets are one of the original forms of placemaking. We’re excited for the opportunity of an immersive learning experience that we can share and build upon with our partners and colleagues locally,” said DeAnna Cummings, Executive Director of Juxtaposition.

DeVon Nolen, manager of the West Broadway Farmers Market, said, “I look forward to sharing and learning some of the best practices around public markets internationally. Increasing access to public space is critical to our work in advancing toward growing a vibrant cosmopolitan city where all citizens are safe and welcomed!”

The conference includes two full days of speakers and workshops, as well as an entire day touring and learning about the inner workings of Barcelona’s extraordinary markets, led by experts from the Institut Municipal de Mercats de Barcelona (IMMB), operator of the city’s remarkable market system.

“Locally, we have a demand for economic development projects that value the environment and empower underserved communities,” said Ninth Ward Minneapolis City Council Member, Alondra Cano. “Globally, strong public market systems are effectively operating to meet these very demands and it’s time for the city of Minneapolis to view public markets as a serious economic development strategy. I am looking forward to learning from other cities and countries attending this event and bringing a wealth of knowledge back to Minneapolis.”

“Arguably the international model for a Market City,” says PPS, Barcelona boasts 43 food and non-food public markets, many of which have recently undergone major renovation. The conference will focus on new trends and innovations for the preservation and revitalization of public markets internationally – from temporary open air markets to permanent market halls to 24/7 bustling market districts. Conference participants are traveling to Barcelona from over 40 countries and over 130 cities.

“It’s exciting to see Minneapolis neighborhoods and communities joining the national and international conversation on urban issues and placemaking,” said Kjersti Monson, Director of Long Range Planning for the City of Minneapolis. “Our city is a mosaic of assets and opportunities just waiting to be activated by strong local action and capacity. I look forward to hearing reports from the field as these ideas evolve!”

Upon returning from Barcelona, the group will schedule presentations and talk backs to share their learning with the Twin Cities’ broader community of developers, artists, residents and others who have an interest in a Market Cities approach to development. Look to westbroadway.org for updates.