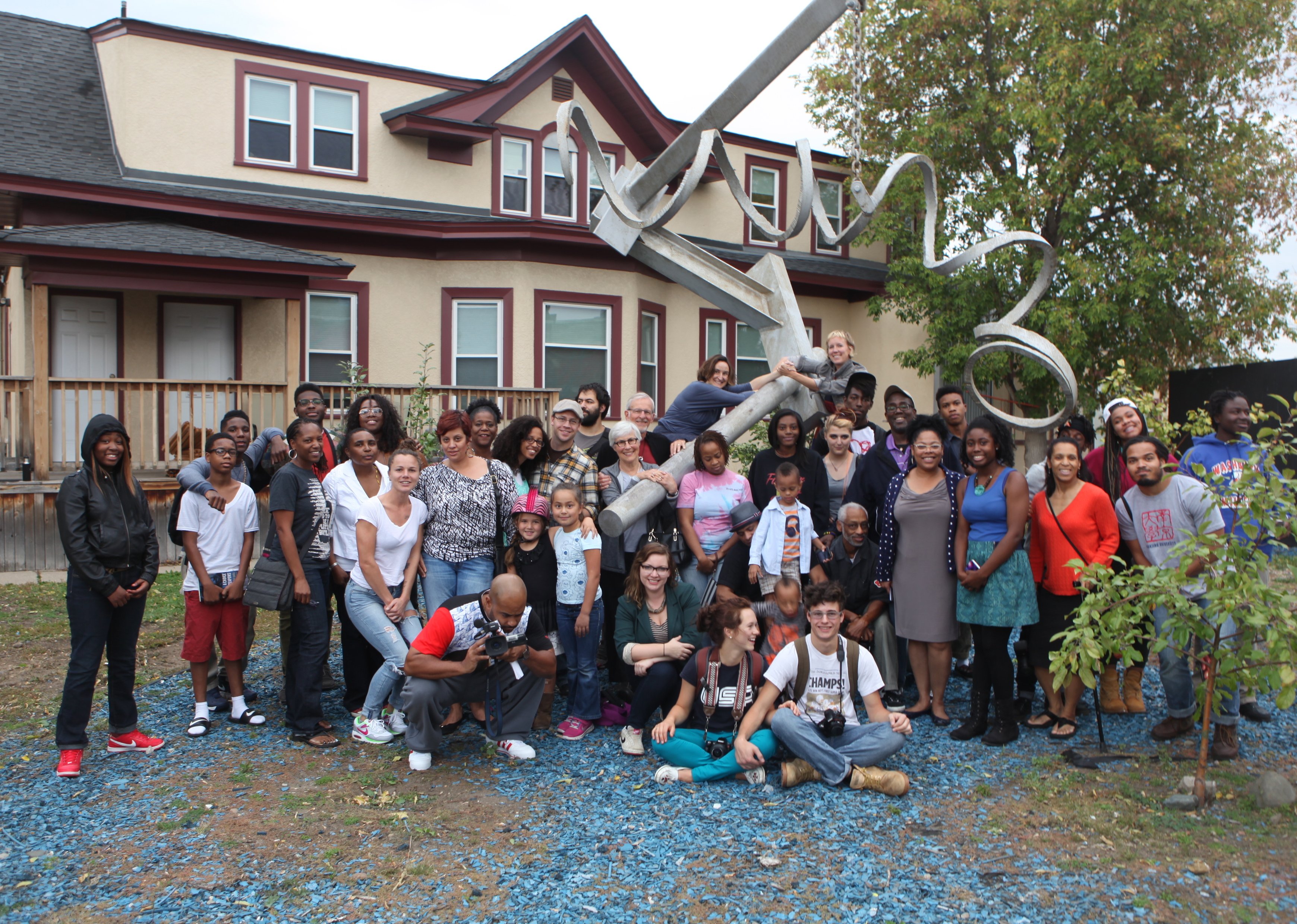 Renowned international photographer Jamel Shabazz hosted an intergenerational, street photography workshop in the Twin Cities last week as part of the third annual community conversation for One Minneapolis One Read. This year, the citywide read teamed up with Juxtaposition Arts to host a residency with the Brooklyn photographer, lecturer and teacher of the visual arts.

Every year, the community read program selects a book and hosts a community conversation to encourage citywide reading in Minneapolis. The book this year is A Choice of Weapons, written by the late Gordon Parks, an African American photographer, artist, filmmaker and writer. Parks is most known for his photography for Life magazine, and as director of the iconic 1970s film, Shaft.

The crowd was fortunate to have the opportunity to listen to Robin P. Hickman, the great-niece of Parks, who spoke about his legacy and beyond, as well as his experience moving to St. Paul, Minnesota in 1928 at the age of 16, after his mother passed away.

According to the One Minneapolis One Read website,  Parks’ autobiography tells how he “managed to escape the poverty and bigotry around him, and launch his distinguished career, by choosing the weapons given him by ‘a mother who placed love, dignity, and hard work over hatred’.”

Hickman’s presentation was empowering, and it is clear Parks was an inspirational man. Afterward, Shabazz gave his presentation, beginning by giving a heart-warming speech about his introduction to photography, and how Parks’ work influenced him as a young African American male.

Shabazz also spoke about his own particular approach and style to photography while sharing portraits of people—ranging from couples, families, group photos, everything!—that he has taken over the recent years. Every photograph told a story in a way that captured the beauty of each individual within the portrait. After the presentation, participants were all invited to practice taking photos of one another. Shabazz also emphasized the importance of youth in his presentation, and even gave away his copy of A Choice of Weapons to the youngest audience member — a 15-year-old, whom Shabazz made promise to pass on the book after reading it.

Shabazz was 15 years old himself when he started photography; since then, he has published three books – Back in the Days, The Last Sunday in June, and A Time Before Crack.

During his residency in Minneapolis, Shabazz worked with local high school students to create their own photographs which will be presented in a photography exhibit at Mill City Museum. The display will run from October 24, 2013 – June 8, 2014 with a companion exhibit at Juxtaposition Arts showing from October 24 – December 1, 2013. The students’ art will be displayed alongside work from Gordon Parks.

Both exhibits are free and open to the public.