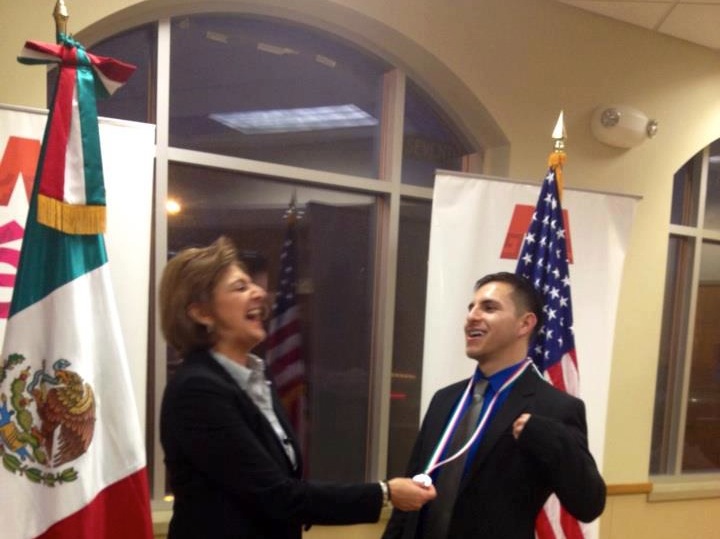 At 25, Juventino Meza is much younger than the typical recipients of the Ohtli Award and the Immigrant of Distinction Award. Meza was honored in a ceremony at the Mexican Consulate in St. Paul on March 7, with the Ohtli Award from the Mexican government. He received the Immigrant of Distinction Award on March 14 from the Minnesota/Dakotas Chapter of the American Immigration Lawyers Association, at the Hubert H. Humphrey School for Public Affairs of the University of Minnesota during a community forum on immigration reform.

Ohtli is Nahuatl (an indigenous language in Mexico) for “path.” Meza has done much to improve the path of young immigrants in his community. He was a co-founder of NAVIGATE to assist students in accessing higher education and scholarships regardless of their immigration status.

Annie Levenson-Falk, Board Chair of NAVIGATE MN said, “Juve’s awards are very well earned. He works tirelessly, nonstop for immigration and education reform, and shares his experience in service to others. His leadership not only helped to create NAVIGATE but also made it a sustainable organization and a leader in the Minnesota community… Juve was at NAVIGATE in an official capacity from 2007-2012, first as a founding intern, then as chair, then director. He continues to serve in a volunteer capacity… I’m honored and grateful to have the opportunity to work with him.”

Meza recalled his motivation for starting NAVIGATE MN along with four fellow Augsburg students and Linea Palmisano. “Back in 2007,” he said, “we were doing a lot of work to pass the DREAM Act but we were doing nothing to make sure that students knew their options for going to college. What we found through going to meet with high school counselors throughout the Twin Cities was not only that students were unaware of their options, but also staff including counselors, teachers, and principals were uninformed. Students tend to trust their teachers [to inform them well] but they often didn’t have current information about Minnesota…There has never been a law against undocumented students going to college. The issue has just been getting that information to the students and obviously the issue of how to pay for college.”

The Mexican Consulate has routinely enlisted Meza’s assistance with various projects. Consular officers Alan Torres-Bovar and Javier Alejandro Magana reported that Meza’s community activism experience allows him to have a “very significant impact” when he assists the Consulate in St. Paul with tasks such as organizing community forums, helping community organizers connect, or securing needed materials for projects. These actions have definitely shown Meza’s leadership, according to Magana.

Every year each consulate selects a recipient of the Ohtli Award. The choice must be approved by the Instituto Mexicano del Exterior (Mexican Foreign Affairs Department). This award is “the Mexican government’s highest honor for a civilian living outside of Mexico who has devoted part of his/her life and professional activities to ‘forging a new path’ abroad for their countrymen and women.” The Consulate was looking for an award recipient this year who had worked with the consulate and had a “higher education, sought a better life for him/herself and also sought to help his/her community.”  Consul Ana Luisa Fajer wanted to personally give this award to Juve before her departure in April this year.

When asked about Meza’s unusually young age, Torres-Bovar responded that age is not really part of the criteria for the award, but in this case they were pleased to give the award to someone so young because one of the Mexican Consulate’s current goals is to reach out more to young Mexicans.

Matt Armbrecht, chair of the AILA committee that chose Meza for the award, described the selection process this year in an email: “This year we focused specifically on the younger generation, and wanted to acknowledge people who came to the U.S. as children and who view the U.S. as their home… In Juve’s case, in addition to excelling in school, he started many initiatives on his own and through his own energy built them up and made them successful.”

Meza currently works at the Citizens League and has been focusing on the MN Dream Act, which was passed by the Senate May 1st. He is working on projects designed to engage Minnesotans around policy issues, such as the state budget and tax reforms. He is also working with others on the effort to pass federal immigration reform this year. When asked about future plans Meza said, “I am really excited to be able to transfer the skills I’ve learned working on the MN DREAM Act to other issues like health care and tax reform… I’m just honored to have been given the recognition and excited to keep going.”

CORRECTION: Spelling of name of co-founder of NAVIGATE  is Linea Palmisano.