Not one to let one of Carly Melin’s peculiar talking points about her former allies go to waste, Governor Mark Dayton told members of the ECM Editorial Board that criticisms of Minnesota’s highly restrictive new medical marijuana program came from “Washington, D.C.-based organizations whose mission is to legalize marijuana.”

The statement stands in stark contrast to recent news reports about the reaction to the bill–and the hopes of business people looking into getting in on the state’s medical marijuana program at the ground floor. As James Nord reported at Politics in Minnesota, the potential that the state’s program will later expand is a chief factor in creating interest among “pot-repreneurs.”

Not if Governor Dayton can help it. He’ll fight expansion.

Dayton said it is very likely that supporters of the legalization of marijuana will again be at the Capitol next year. He said much of the criticism he received for supporting adopted medical marijuana legislation came from Washington, D.C.-based organizations whose mission is to legalize marijuana.
“They want the ability to grow and smoke the leaves,” Dayton said. The governor said the matter could be resolved by a constitutional amendment or by legislation. He said he would oppose it. “It’s a sticky wicket,” Dayton added.

We’re probably not the only ones wondering what he’s smoking when he says things like that. While NORML-MN advocated for full legalization, Minnesotans for Compassionate Care and a dedicated group of Minnesotans living with a wide range of conditions sought much more extensive medical cannabis program.

They were quite willing to compromise on the ability of registered patients to grow their own plants, but sought the ability to smoke or vaporize leaves because it has been shown to be the most effective means to provide relief for conditions like PTSD. 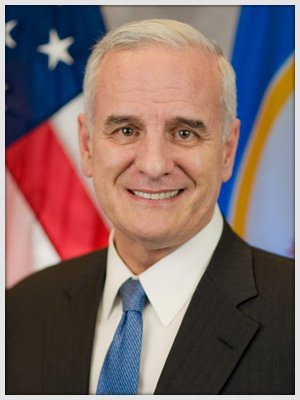 Dayton must be heavily insulated from the rest of Minnesota if he imagines that the demand for a broader medical marijuana bill came solely from Washington DC.

There’s Senator Scott Dibble’s direct assertation in hearings that he became an advocate of medical marijuana after learning about the relief it provided by people living with HIV. The Journal reported in March 2014:

The District 61 senator said he’s lost friends to HIV/AIDS and seen the effects of symptoms, such as wasting syndrome, nausea, pain and more that medical marijuana has proven effective against. And it’s shown to be effective for all sorts of diseases and ailments without the side effects of most pills, he asserted.

DFL activist, veteran and blogger Tommy “Two Putt” Johnson posted in Left behind, once again at the Minnesota Progressive Project:

Check out the title o’ that story, to the right: “Minnesota enacts restrictive medical pot program”

At the Star Tribune, Patrick Condon repoted in Some medical marijuana backers back out of Minnesota program:

. . .Under Minnesota’s new law, eligible patients will be able to use marijuana only in oil or liquid forms. Some patients like Traun worry that marijuana-based oils are more potent and likely to intoxicate than are the plant’s leaves and buds — a concern backed up by experts.

By denying patients access to plants, and prohibiting smoking of the drug, Minnesota will be unique as it becomes the 22nd U.S. state to legalize marijuana as a treatment for some afflictions. While the wider medical community remains split over the benefits of medical marijuana, several prominent doctors who have made the medicinal qualities of the cannabis plant a focus of their work are skeptical about the details of Minnesota’s program.

“All the other medical cannabis programs in the country are going to be watching what happens in Minnesota very carefully, because it’s so different and unique,” said Dr. Steven Jenison, a physician who was the first medical director of New Mexico’s seven-year-old program and later chaired its medical advisory board. “There are aspects that are intriguing, but also aspects that a lot of us consider to be a bit mystifying.”

Cannabis-based liquids are common for treating children with severe epileptic seizures; certain compounds of the plant are mixed with olive oil and administered orally. Parents of some of those children were among the most visible lobbyists for Minnesota’s law.

But adult patients with conditions including Crohn’s and other diseases also lobbied hard for the bill. Many wanted access to the medicinal qualities of the whole plant. When the active ingredient is extracted and condensed, it becomes a substance known on the black market as “hash oil.” That oil can then be loaded into a vaporizer, where it is heated to a point short of combustion, then inhaled.

“A lot of patients dose the plant in minimal amounts. They’re not trying to get high, they’re trying to achieve symptom control,” said Dr. Sue Sisley, a psychiatrist who has been conducting research at the University of Arizona into marijuana’s possible benefits for post-traumatic stress disorder sufferers. “Why would they subject themselves to something far more toxic, something much more likely to make them intoxicated?” . . .

Dayton’s continued insistence that sick Minnesota advocating for medical marijuana just want to get high is an insult–and his notion that their minions of DC lobbyists seems spun from the cobwebbed mind of Melin’s Facebook persona.

And that group with DC-roots that Dayton is so quick to condemn (and Melin as well, after carrying one of its bills before caving in to Dayton)? At Mint Press, Katie Rucke chronicles their maladies and dashed hopes in Minnesota’s Medical Marijuana Battle Is Far From Over:

Although the new medical marijuana law is expected to positively impact about 5,000 Minnesotans, Gov. Dayton’s insistence, per the recommendation of law enforcement, that medical marijuana only be legalized in oil and pill forms for a limited group of patients means that at least 33,000 people in the state will continue to go without legal access to medical marijuana.

Read their stories at Mint Press.

Those hoping to modify Minnesota’s law will continue to have Dayton as a roadblock to relief should he be re-elected. While his survival in the four-person Republican primary in August isn’t guaranteed, endorsed candidate Jeff Johnson had earlier signaled a willingness to sign a medical cannabis bill.

It is unclear, however, how different or more expansive of a bill Johnson might support.

For the record: Bluestem Prairie is based in Maynard, a small town of 266 in Chippewa County, Minnesota. If Governor Dayton wants to claim this rural blog is a Washington DC pro-recreational marijuana lobby in wanting a bill that will help our veteran friends with PTSD, we’ll leave assessment of that speech act to medical experts.