Next Saturday, June 21, from 1-4pm, Neighborhoods First, a community group in Saint Paul’s Merriam Park, will be hosting an event on the corner of Summit Avenue and Syndicate Street. The event is titled “Imagine an Ayd Mill Linear Park.” There will be speakers, music, food and exhibits. It will be an opportunity for community members to look at what is currently known as “Ayd Mill Road” and imagine what it could look like as a linear park, or something other than a freeway.

Ayd Mill Road runs from Selby Avenue at the northwest end to Jefferson Avenue and Interstate 35E on the southeast end. It was named for John Ayd, a German settler who maintained a grist mill and a residence there in the 1800s. Back then, there was a lake near what is now Cretin-Derham Hall. From this emanated a stream called the “Cascade Creek” which flowed north and then down the present-day ravine. Its waters were used to turn Ayd’s mill. Farmers came to the mill to have their corn ground. Later, Ayd stocked his millpond with trout and it became something of a tourist destination.

In the late 1880s, the Chicago Milwaukee, St. Paul and Pacific Railroad acquired part of the right-of-way along Cascade Creek to build a commuter rail line known as “The Short Line.” It carried interurban and passenger trains between Saint Paul’s Union Depot and the Milwaukee Road Depot in Minneapolis. Today, the track is owned by Canadian Pacific Railway and carries two Amtrak trains and multiple freight trains each day. 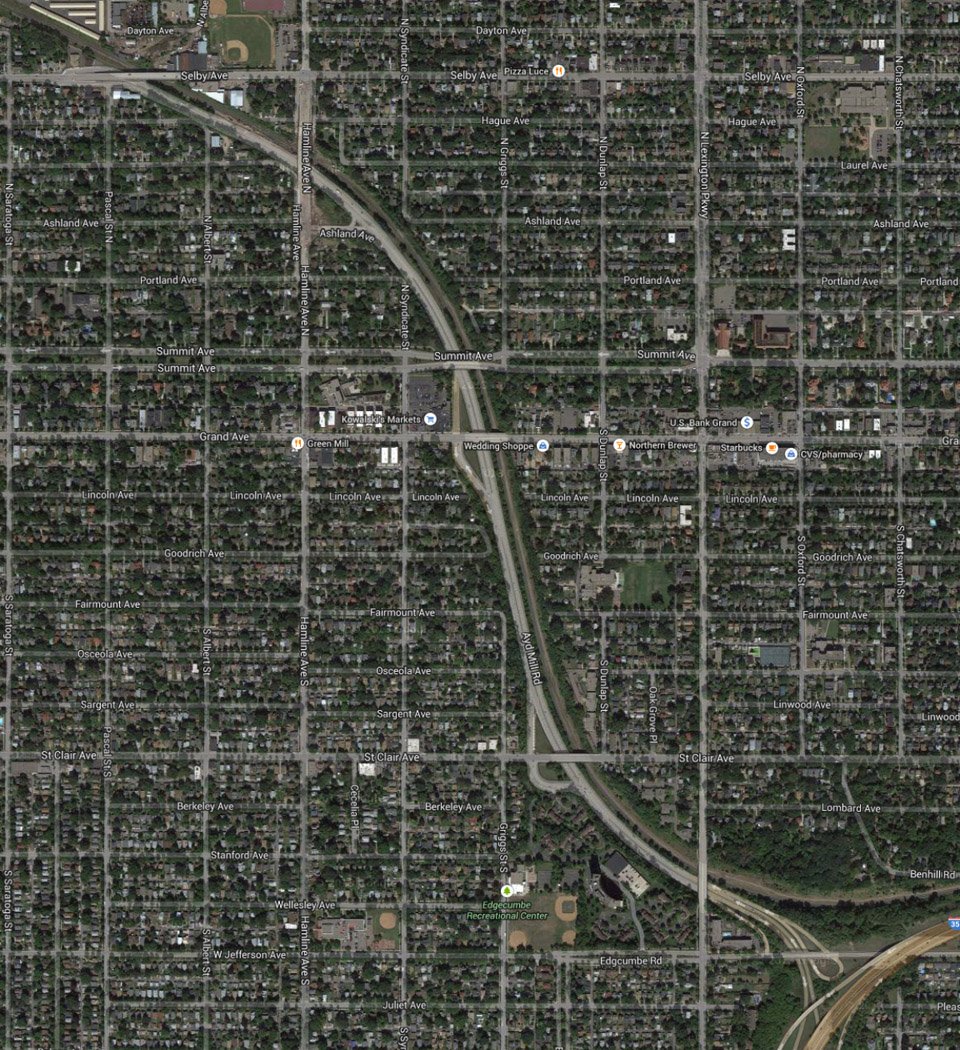 In the 1960s, at the height of our national freeway building frenzy, the City of Saint Paul began construction of what would become the “Short Line Road” adjacent to the rail line. Their idea was to create a connector highway between the still uncompleted Interstates 35E and 94. Community opposition in the Merriam Park and Summit Hill neighborhoods stopped the project and it was ended at Selby Avenue on the north and never connected to I-35E at the south. It remained that way for over 35 years. Along the way, in 1993, it was renamed “Ayd Mill Road” after John Ayd.

During the mayoral administration of Norm Coleman, a community task force was assembled to decide what to do with the land. They began a Draft Environmental Impact Statement (EIS) process to examine various alternatives. The choices presented were a four-lane connector freeway, a two-lane road, a “no build” option and a linear park. Coleman’s task force chose a linear park, as did the Lexington-Hamline and Snelling-Hamline Community Councils. Merriam Park selected “No Build” and even the city council passed a resolution supporting a two-lane road. Defying the task force and community groups, however, The Saint Paul Planning Commission directed that a four-lane freeway be the “Preferred Alternative” in the Final EIS.

In 2002, newly elected mayor Randy Kelly unilaterally connected the south end to I-35E, ostensibly as a “test,” but it was a test he made permanent. Then he and the Public Works Department pushed the four-lane freeway option in the final EIS, ramming it through over community opposition. Since then, the Public Works Department has been quietly acquiring property and the rights to build a major 4-lane freeway connection at the northwest end, linking the road to I-94. It would be an enormous new urban highway project that would involve new underpasses and flyovers and could easily cost fifty million dollars or more.

The process by which highway advocates have moved their freeway agenda forward is similar to what they’ve done with I-35E and countless other highway projects. First they get rights to a road. Then they widen it. Then they say “oh it’s just a ‘parkway’ that will only have 45 mph speeds and no trucks,” even as they build it to freeway standards and include all sorts of off-ramps and freeway peripherals. All the while, they grind down community opposition with endless meetings, create astroturf freeway support groups, use political connections to construction firms and engineering firms to pressure elected officials, and directly lobby neighborhoods and local chambers of commerce. Suddenly, they’ve built another freeway! A decade later, they’re widening it. Since World War II, we’ve watched this process in the Twin Cities over and over.

The Saint Paul Public Works Department has trotted out various justifications for a four-lane freeway connection between I-35E and I-94 along the existing Ayd Mill Road. They said it would help alleviate traffic congestion on the south end of Lexington Avenue, as suburbanites cut through the neighborhood from I-35E to get to I-94 and Minneapolis. After they opened the south end and moved all the traffic to the north, they claimed a connection to I-94 would alleviate traffic congestion at the north end on Selby. To be sure there is traffic congestion, but Public Works could make this go away by closing the highway entirely, reconfiguring the ramps near Lexington to make cut-through commuter traffic difficult or impossible, and putting in a connection between the two interstates downtown, in an area already destroyed by freeway interchanges.

The Public Works Department says that building a linear park is impossible because they acquired an easement for “Highway Purposes” from the railroad to build the Short Line Road. They claim that the railroad could take the land back if they made it into a bike trail and park. I sent a PDF of the original 1960 condemnation order that created the easement along with photos and maps to Andrea Ferster, the General Council of the national organization “Rails to Trails.” She said that the Minnesota Supreme Court has taken a broad view of road or rail easements, allowing them to be used for almost any public transportation purpose including bike trails and she pointed me to the case “State of Minnesota by Washington Wildlife Preservation, Inc. v. State of Minnesota and its Department of Natural Resources,” 329 N.W.2d 543 (Minn. 1983).

Even if the railroad could take the easement back, which is highly doubtful, it is a very thin sliver of the existing road and the land available in the ravine.

Ultimately, the Public Works Department wants a four-lane freeway because they are a road-building agency that is used to solving transportation problems with roads. As road-builders have preached for a hundred years, they mistakenly believe that they can build their way out of traffic congestion with yet more highways. Also, they know that connecting two federal interstates could qualify the project for federal highway dollars. While this might not be their primary motivation, there is no doubt the project would create a huge amount of work and cash flow for their agency.

Competing against Public Works’ freeway vision is the desire by many to extend the Minneapolis Greenway across the Mississippi River and down the Ayd Mill Corridor, and the desire not to have our city bisected by yet another freeway, with its inherent noise, blight, and pollution. The Draft Saint Paul Bikeways Plan, the city’s Comprehensive Plan and many community plans have a Greenway Extension down the Ayd Mill corridor and, despite recent legal obstacles, there are reasons to believe this dream is still very much alive. If some residential or commercial development were included as part of a linear park, the city could collect additional property tax revenue from the land, rather than pay to maintain a road for suburbanites to reach Minneapolis ten minutes faster. Most of all, a Greenway would be an amazing park asset for multiple neighborhoods.

This is where all of you come in. Are you a designer, landscape architect, or a Photoshop artist? Check out Ayd Mill Road on Google satellite view, in street view and in person and imagine how the land might be used for something other than a freeway. It could be one hundred percent park, or some hybrid with a two-lane city street, bike trail and occasional housing or retail development on the western slope, tied into the existing neighborhood. This would be similar to what exists on Mississippi River Boulevard. Consider what the Midtown Greenway has done for Minneapolis or the value of real estate on Mississippi River Boulevard. Use your imagination. Create images, rough plan sets or other proposals and share them with us, with elected officials in Saint Paul and with Neighborhoods First. Cities across the USA have torn down or considering teardowns of old freeways. It would be a shame if Saint Paul built a new one. Check out freeway teardowns and planned tear-downs in Portland, San Francisco, Milwaukee, Providence, Baltimore, Oklahoma City, New York City, and Syracuse . …and come to the “Imagine an Ayd Mill Linear Park” event on June 21!