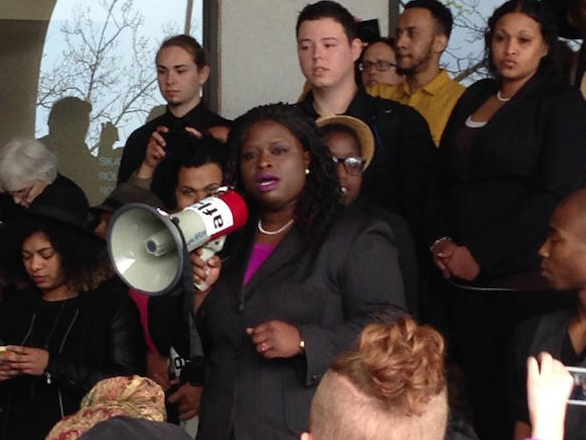 Judge Peter A.  Cahill denied a motion for a pre-trial gag order at a hearing Friday for the defendants in the case about the Christmas protest at the Mall of America. The hearing set the dates for the upcoming pre-trials and trials of the individuals charged with a range of misdemeanors that include trespassing, unlawful assembly, etc.
Around 30 total defendants set dates for either their trials or pre-trials, to take place next fall (with one exception, where a defendant requested a speedy trial, set for July). They were charged after a protest that occurred in December of last year, over police treatment of people of color, held at the Mall of America.
“The defendants have first amendment rights,” Cahill said. “These are cases of community interest.” He then reminded attorneys not to make public statements that would prejudice the jury, and hinted that he might have to move the trial to a different county if the court wasn’t able to find unprejudiced jury members “in this age of Twitter and Youtube.”
In a speech to supporters after the hearing, one of the defendants, Nekima Levy-Pounds, who is also an attorney and co-defending herself with attorney Jordan Kushner, said she was standing with the young people of the Black Lives Matter movement. “If that’s what I have to do, that’s what I have to do,” she said.
“At the courtroom earlier, they tried to silence our voices,” Levy-Pounds said. “It’s not our fault that our young people from Black Lives Matter are media savvy. She referenced The Mall of America’s PR disaster of starting the hashtag #itsmymall, only to have it usurped by Black Lives Matter supporters, and praised the young people for “rocking Twitter” and knowing how to send out messages. “We will use our first amendment rights of free speech to speak the truth,” she said. “The judge saw right through their tactics and refused to grant a gag order because the public needs to know what’s going on.”
The hearing also included a motion by the attorneys of the defendants to compel disclosure that would, among other things, identify for the lawyers and the defendants the identity of the undercover police officers that gained evidence against the protesters and organizers. Kushner argued that in order for the defense to prepare properly, they need to know who the officers were, and promised that images of the officers wouldn’t be disseminated to the public. “In order for the defendants to respond to the charges of the state, they need to know what they were talking about with knowing who is making the accusations,” Kushner said.
City of Bloomington Attorney Sandra Johnson’s objection to the images being shared was that some of the officers were still undercover in various narcotics transactions.
The defense also sought various other documents that the City of Bloomington obtained from the Mall of America. Judge Cahill said he wouldn’t let the Mall of America’s attorney to speak in the courtroom, as they are not a party in the case, but did allow them to file an amicus brief.
The judge took the motion under advisement.
Cahill denied the defense’s motion to find out the extant of the monetary restitution that the prosecutor would be seeking for police time. Johnson said the prosecution hadn’t determined yet whether they would be seeking restitution yet.
The hearing took place at the same time that, in Baltimore, six officers were indicted over the murder of Freddie Gray, a black man who died while in police custody. In the rally following the hearing, Kandace Montgomery, one of the defendants, noted the timing. “That is why we took to the streets on Wednesday and that is why we are going to get justice,” she said. “If we get justice, we wouldn’t be at the mall saying ‘Black Lives Matter.’”