There has been a lot of good economic news lately, at least compared to the very bad news of a few years ago. But that doesn’t mean that there aren’t bad things worth keeping a close eye on – especially those that predict future action by the Federal Reserve.

The velocity of the US Dollar – the number of times per year that money turns over through the economy – continues to drop without an end in sight. This is a worrying sign because it suggests that most of the economic growth we are seeing comes from money that is being more or less printed by the Fed. It also suggests that there will be another round of quantitative easing, or even more money printed. There has to be a better way – and this wouldn’t be Barataria if we didn’t take a stab at how.

The velocity of the US Dollar is shown below in a chart from the St Louis Fed that starts back at the last major inflection point in the late 1990s. From that time until now it’s been nearly straight down, save a little rise in the mid 2000s. Since we first talked about the velocity of money last year the trend has continued pretty much along the same regression line: 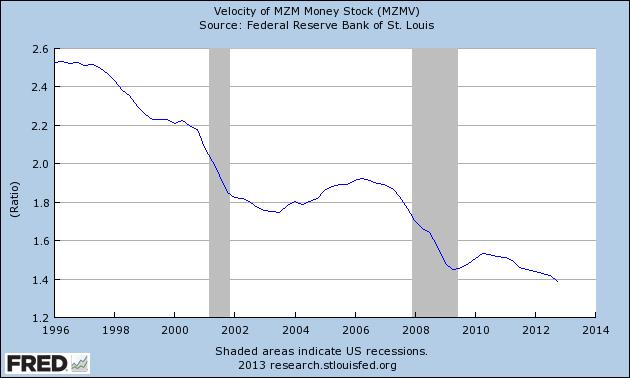 Money is turning over slower and slower through the economy, suggesting that people with money are simply not spending it as rapidly as they used to.

This is consistent with risk aversion and the psychological sense of “depression”. It’s hard to imagine a major turnaround until we see a reversal in this chart. More interestingly, if the slow economic growth we have isn’t coming from more money being spent or invested, it must be coming from the expansion of money itself – which is to say it’s defined by Fed policy and deficit spending.

What’s the solution? If the velocity of money continues to drop there is only one thing that the Fed can do and that’s to keep printing more. We’re caught in an endless loop of more and more stimulus and lower benefit from that stimulus with each round. Something different has to happen if any more rounds of quantitative easing can be expected to have different results.

Given that more QE appears quite likely in this environment, it only makes sense to do it in a way that guarantees it moves through the economy more efficiently than the money that was sent forth before it. That’s where the ancient idea of Jubilee comes into play – a wholesale cancelling of bad debt. And ideally this should be taken in concert with central banks around the world – the ECB, Bank of England, Bank of Japan, and anyone else who wants to participate.

How could a Jubilee work? Let’s say that we have $1 Trillion in new quantitative easing. The central banks doing this could announce a period of time, say 3 weeks, in which every member bank with debt they want to offload can register that debt as being for sale. The total amount offered would likely be much more than $1T – let’s say for the sake of argument that $2T is registered when the clock runs out. That means that all the debt will be bought by the Fed at $0.50 on the dollar. As the time period goes on banks that offered debt for sale can pull it as this “auction” continues if the net payoff is not good enough for them. When it’s over, the payoff begins – and debt is canceled.

If this was done around the world at the same time, you can bet that a lot of Greek and Italian debt would be canceled – and the banks that offered it for cancellation would take their share of the hit. Imagine if junk paper all around the world was taken from the necks of people who are never going to pay it off anyway.

How would a $2T or so cancellation of bad debt help our economy? Given that total private debt is over $40T, or about 2.8 times the total GDP, removing 5% of it might not do a ton of good. But it would help one Hell of a lot more than simply buying T-Bills or mortgaged backed securities. There would be more money available for purchases and investments – and might even turn the velocity around.

It’s hard to imagine how this depression can end without cancelling or somehow growing out of our debt. If we do see the need to print more, why not put it right to what we know is the bottom line? There’s no better way to push the reset button and move forward into whatever comes next.

Follow the links for more info on Jubilee and the Velocity of Money.