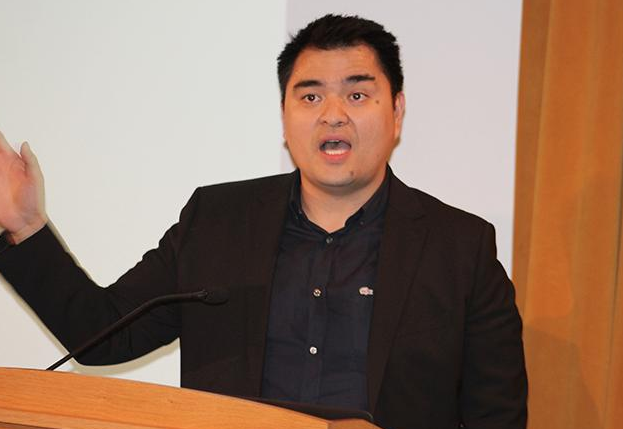 On Tuesday, when Jose Antonio Vargas took the stage at a packed University of Minnesota auditorium, he began his nearly 40-minute speech with the story of his 2012 arrest in Minnesota.

“I got arrested on your freeway by driving and unfortunately listening to Beyoncé with my headset,” the Pulitzer Prize-winning journalist told a crowd of more than 250 people at the Humphrey School of Public Affairs.

He joked that since it was an Asian-American officer who pulled him over — Vargas was born in the Philippines — he thought the officer wasn’t going to punish him for the violation. That didn’t happen. The officer handcuffed Vargas on the freeway after realizing that Vargas carried an invalid driver’s license.

The crowd erupted into laugher when Vargas talked about how the officer found out that Vargas was also an undocumented immigrant: the officer searched Vargas’ bag, only to find three copies of a TIME magazine cover with a photo of Vargas and a story about his life as an undocumented immigrant and how people like him were coming out, as he did in a New York Times Magazine article in 2011.

Vargas’ speech painted a vivid picture of what it means to lead a life of an undocumented immigrant — a story that also offered an unvarnished look at the state of the nation’s immigration policy. The discussion was part of a daylong “Out of the Shadows Immigration Symposium” event featuring, among other things, panels of policymakers and immigration advocates.

Vargas, who at age 12 was smuggled into the U.S. from the Philippines, offered many examples of the legal predicaments faced by the more than 11 million undocumented people. “One of the biggest ironies about being undocumented in this country is knowing that your life is limited by a piece of paper — all the while knowing that your life is way more than a piece of paper.”

He added: “And then you’d ask yourself, ‘Are pieces of papers what make someone an American?’”

To the American citizens, Vargas said: “I sincerely hope, by the way, that you value what you have. And I hope that you don’t take it for granted.”

Vargas’ trials and triumphs as an undocumented immigrant here are widely documented, but the tens of thousands like him remain invisible in Minnesota. A recent report from the Minneapolis-based Advocates of Human Rights, however, shed light on how excluded and vulnerable undocumented immigrants feel in the state.

The “Moving from Exclusion to Belonging” study, which drew its findings from a number of federal policies, about 200 interviews and more than 25 community discussions throughout the states, unveiled in part the following:

Although Minnesota is a welcoming place, many policies, laws, and practices exclude immigrants and refugees from full participation and inclusion in the community, violating their human rights.

Immigrants and refugees face additional barriers in realizing their human rights due to language, culture, and immigration status.

In addition, thousands of undocumented Minnesotans and their families live excluded from the community and in constant fear of deportation, leaving them vulnerable to human rights violations and abuses in Minnesota.

The “Out of the Shadows” symposium was co-hosted by The Advocates for Human Rights and the University of Minnesota Law School’s Center for New Americans and the Immigration History Research Center.