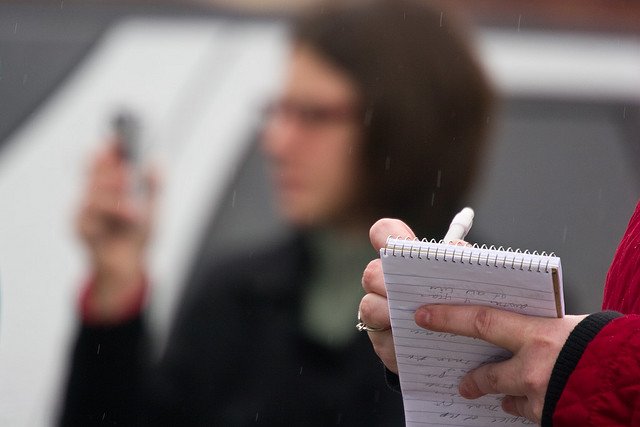 In the future, there will be no journalism. I’m almost sure of it. There will just be three or four corporations that rule over everything and the “news” we receive will come from those corporations. There won’t be any paper, so you’ll only be able to get this news is through the internet- which, guess what? You won’t have access to because you won’t be able to afford anything but dial-up that takes days to load.

This is the stuff of science fiction. Thankfully, we aren’t quite there yet, but I’m always surprised by how many people don’t seem to understand the role of journalism as an independent voice separate from the subjects of a particular story.

Maybe it’s something that needs to be included in civics classes in high school (do the kids these days even take civics?). I can’t tell you how often I get asked if an interview subject can “approve” an article before it’s published. To me, even asking this question seems to suggest the person doesn’t really understand the whole point of having a journalist cover something. I’m not your personal public relations person. If I were, I’d probably be making a lot more money than I’m currently making. By interviewing you, we are entering an agreement of sorts. I’m giving you a chance to share your point of view, and I’m using that perspective as a source for a particular story.

Last week, I attended a panel discussion hosted by the Minnesota Coalition on Government Information about school data, held at the Rondo Community Library and one of the biggest take-aways from the meeting was that as journalists, we not only have to understand what the laws are regarding access to public information, we have to educate others about these laws. Because for journalists, it’s not just a matter of best practices in regard to telling stories accurately. There are laws that not only protect free speech but also compel public institutions to requests for public documents. Minnesota also has open meeting laws that in my experience people don’t really understand or adhere to.

There are reasons for these public laws and there are reasons beyond what is legally required for any individual or group to cooperate with outside journalists providing information or even critique to the public. Because if every individual, organization, government or corporation just gets to tell their own story and only their own story, the groups that hold the most power will always have the greatest reach.

Yes, it is true that there are plenty of often invisible influences into media organizations and for that reason, it’s best for media to be as transparent as possible about their funding sources and other biases. However, having an outside voice to me is incredibly essential to keeping accountability across all sectors of society.