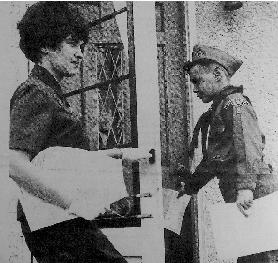 Fifty years ago, parents and other community members rallied to save a library, and in the process founded one of the longest-enduring organizations in the city, what is now Jordan Area Community Council.

Back then, the library was a tiny branch contained within Jordan Junior High, at 29th between Irving and James. And about that time as yet other libraries were short on funds, the idea was floated of merging with the Hennepin County system, which became reality 40-some years later. But I digress. They lost the Jordan branch and the North branch, but eventually gained North Regional, and the Webber Park branch was allowed to stay.

In 1964, the Jordan Area Action Committee, as it was organized a few months after the first library scare, concerned themselves with the area from Broadway and its natural extension along Golden Valley Road, to Dowling, the Mississippi to the city limits. That was the attendance area of Jordan Junior High, said J.S. Futcher, an organizer of the first group who recently wrote a book on the intertwined stories of the library and JACC. He presented slides and commentary at JACC’s 50th Anniversary event October 16. He noted that at the time, there were no other geographic or community groups that they would be stepping on. 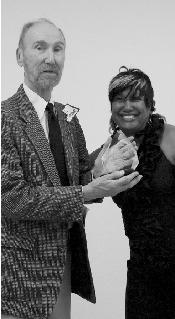 While waiting for and watchdogging the administrative wheels turning on the library front, this band of residents who paid dues of a dollar or two put energies toward addressing dilapidated housing. Finding out that the city had no mechanism for dealing with it, they approached their legislators. Their efforts led to the city having an Office of Hazardous Buildings, and a way to not have taxes rise automatically when property is improved.

Back then, the streets weren’t paved, they were oil and sand. The carrot was federal money to help with 90 percent of the street paving costs, the stick was the city had to inspect every residence inside and out, for code compliance. JACC welcomed that challenge and established a neighborhood conservation district.

JACC archives show other sweeping efforts, from “garbage days” renamed Clean Sweeps, to sending out flyers in 1965 asking people to commit to certain home fixup activities such as picking up litter, fixing sagging fences or porches, tearing down dilapidated sheds, planting shrubs, flowers, and grass seed. First National Bank of Minneapolis’ West Broadway office sponsored the activity and said to watch for local business’ ads for specials on cleanup products. Neighbors were to post their yellow flyer in their windows; if they could see that at least 50 percent of the block was committed, they could call in and receive special recognition. 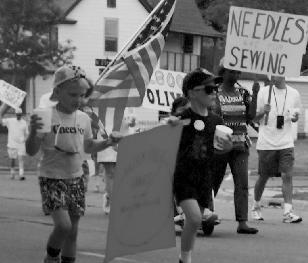 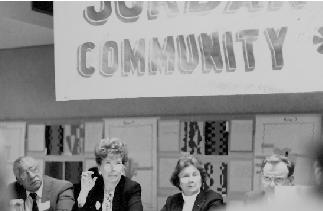 Left: “Needles” sign from anti-drug marches in the early 1990s. Right: Then Aldermen Van White, Sandra Hilary, Alice Rainville and Mayor Don Fraser at a JACC event in the mid to late 1980s.

Even early efforts stressed fixup/cleanup and did not call for tearing down. Later campaigns, such as in the late ‘80s-early 90s “Dirty Thirty” and “Block Out Drugs” were aimed at cleaning out bad behaviors and rectifying code violations. The group went to great lengths to move houses off the new Jordan School site; an effort that moved fewer homes than anticipated and did not produce the home ownership expected, rather high-quality rentals, according to their report to the Neighborhood Revitalization Program (NRP).

Current president Jeff Skrenes, in his report, stated that the organization had worked a lot this past year on re-starting housing programs such as downpayment assistance for new buyers, fix-up loans and emergency repair loans, needed as the depressed housing market had made it tough to borrow against non-existent home equity.

JACC was one of the first neighborhood groups to receive large amounts of funding through NRP in the early 1990s. At the anniversary program, Fourth Ward Council Member Barb Johnson noted that all the organizations now north of Lowry formed because of NRP. JACC’s current boundaries are Broadway on the south and west, Lowry on the north and Emerson on the east.

Fifth Ward Council Member Blong Yang’s home is in Jordan, and he was a soccer coach with Jay Clark. Clark was JACC Director from 1988 to 1993 and now works through an organizer/volunteer training program at the University of Minnesota. He works with youth soccer in what are largely Hmong and Latino communities. Clark popped in toward the end of the meeting after a soccer game. As did they all, he commented on the festive tables and lovely party atmosphere.

Both council members spoke of JACC’s having had some bumps along the way, an understatement, understandable in light of the overall celebratory mood.

During the one bit of annual meeting business they needed to conduct, a bylaw change, Dennis Wagner brought up the history of why the bylaws were written the way they were, to prevent board stacking. The matter was eventually tabled, and will require a special meeting to resolve, attempting to come into compliance with city funding requirements. Those requirements which allow attendance tests for running for the board, but prohibit charging money or an attendance standard in order to vote.

During the festivities, in addition to Futcher’s talk, Ed Enstrom spoke on behalf of a table full of people who were active in the 1980s including Bette Luick and her daughters, and Delores Petersen.

Polly Peterson, active for 20-plus years, received special recognition as she prepared to take “a sabbatical” encouraging others to step forward: “it’s a great education.” 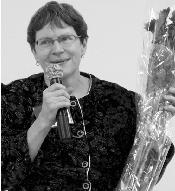 Left: Polly Peterson encourages others to step forward and get active in JACC.

JACC is in need of additional board members; anyone interested may be elected to the board by the existing members since there were no nominations at the annual meeting.