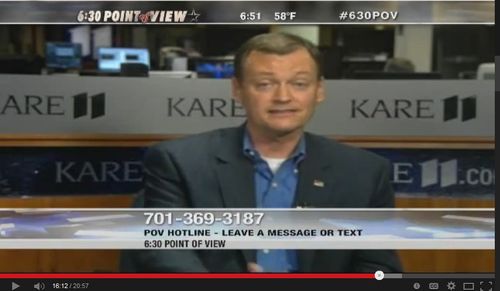 The Star Tribune’s Ricardo Lopez reports in GOP’s Johnson accuses Dayton of slighting outstate Minnesota that the struggling Republican gubernatorial candidate J used the recent decision by the Public Utilities Commission (PUC) to ask Enbridge to consider alternative routes for the Sandpiper pipeline as an example of Dayton’s supposed nelgect of Greater Minnesota.

But last night on Chris Berg’s POV show on Valley News Live, Johnson went a step further and accused the Dayton administration of “trying to kill the Sandpiper.”

Johnson also stooped to the old canard of dividing Minnesotans with environmental concerns against residents of Greater Minnesota. Given that Friends of the Headwaters is headquartered in Park Rapids, and the Hubbard County Commissioners voted to ask Enbridge to consider other routes, framing the debate over the routing of the Sandpiper pipeline as a clash between urban dwellers and yeoman farmers is as silly as it is simplistic.

Johnson’s remarks to Chris Berg http://www.valleynewslive.com/category/219396/630-povbegin at the 15:59 marker in the Youtube:

It’s all North Dakota oil that’s running across the state, and we have an opportunity to actually build something that will help solve that problem along with bringing about 1500 jobs, and the Governor’s administration is not only blocking this, I think they’re trying to kill the Sandpiper . . .

The Star Tribune reported the Dayton campaign’s response to Johnson’s milder statement released at a stop at a grain elevator in Eldred:

Linden Zakula, a spokesman for the governor’s campaign, accused Johnson of politicizing the issue to pander to voters.

The governor has previously said the Sandpiper pipeline is crucial to handle the growing production of North Dakota crude oil, but he also has said he believes environmental reviews ordered by the Public Utilities Commission should be completed first.

“I have said previously that I believe the Sandpiper pipeline is needed to transport the ever-increasing amounts of Bakken oil across Minnesota,” Dayton said in a statement. “I also know that years ago, the Minnesota Legislature made the Public Utilities Commission responsible for approving and routing pipelines in order to remove politics and politicians from those complex decisions. The wisdom of that action is made clear to me once again today.”

And the Strib’s Lopez reports that the DFL piled on:

The DFL quickly hit back at the Johnson campaign, arguing that the GOP challenger’s record demonstrates he is trying to redefine himself as an advocate for rural Minnesota before the November election.

Ken Martin, DFL Party chairman, pointed to Johnson’s 2003 vote in the Legislature reducing local government aid funding by more than $300 million. That aid, which comes from state coffers, is distributed to counties and cities throughout Minnesota, which depend on the state funding to fund services.

Bluestem is fascinated by the Republican fantasy that painting Greater Minnesotans as anti-environmentalist is a winning card. You’d almost be forgiven for wondering whether they simply think we’re a bunch of single-minded hicks.

And Johnson’s heightening his rhetoric to make this claim about the Dayton administration’s intent? Spoken like a candidate desperately behind in two recent polls.

Here’s the clip, set to start at Johnson’s accusation that the Dayton administration is trying to kill the pipeline.