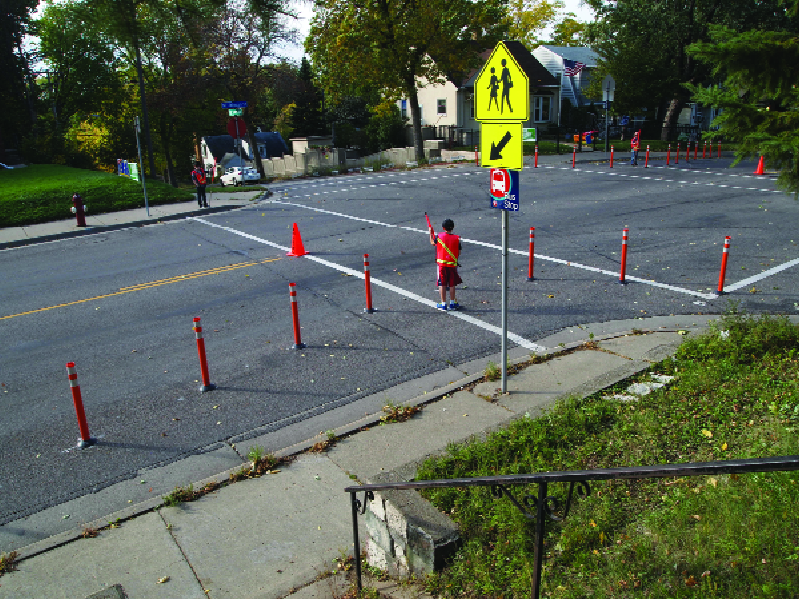 “Okay! One look, two looks, three looks, four looks. Flags out. …Flags in.” The school patrol team captain calls to teammates on the other three street corners. A walkie-talkie hangs from a lanyard; a voice from nearby Waite Park School informs him the 3:45 bell has just sounded, the last students heading their way.

Crossing 34th Avenue NE at Johnson Street (see photos, above) just got easier thanks to a Safe Routes to School-sponsored temporary traffic modification. The right hand (parking) lanes in both northbound and southbound directions have been gently blocked at the intersection with flexible bright orange tubes for about a month. They may be there a few weeks longer, said Forrest Hardy at the City of Minneapolis.

Whether they’ll be replaced with permanent concrete bumpouts remains to be seen. The “problem intersection has a blind hill on either side, it’s so steep,” Hardy said. “We met with Waite Park Community Council and Council Member Kevin Reich” on the experiment, which cost about $500, re-using materials from past temporary projects.

“We’ve gotten good feedback from the schools, working with the school patrols. It is working well to stop cars.” Student patrols used to stand on the curb to extend their flags. This allows them to stand in the parking lane and the flags go out into the traffic lane. “We’ve only had one report of a car running through,” Hardy said.

“The other thing it does is slow down the right-hand turns. Cars used to come around corners so fast they were almost on two wheels. This has also stopped the passing on the right; when cars stopped for the crossing sometimes we’d see them drive around into the parking lane.”

If a car does hit one of these posts, which are attached with a polymer adhesive, it will bend and then spring back. (The inset photo on the front page shows how far one person could bend it.) When the markers are removed for winter, “we’ll use a skid steer.”

If the City does decide to permanently narrow the intersection with bumpouts, at an estimated cost of $25,000, “that’s actually fairly cheap,” Hardy said. “Because of the hill, there’s no storm drain inlets” to work around or relocate. “We don’t anticipate that would be done this season,” because of weather uncertainty. It will also give Hardy a chance to observe what happens in winter.

Hardy said that while nearby intersections are also marked for pedestrian crossing, 34th Avenue is the most direct route. He anticipates that as it is perceived as safer it will be used more.

The Minneapolis Safe Routes to School Initiative seeks to get more kids walking to school. The exercise is good for their health, helping to prevent obesity. Air quality should improve with by cutting down vehicle emissions in the school’s vicinity, according to a 35-page report.

The City of Minneapolis’ Safe Routes to School report builds the case for connecting neighbors to schools through making it physically safe for kids to walk. Some neighborhoods organize a “walking school bus.”

Stating that school choice has created an expensive and unsustainable system of busing, the report makes many recommendations, including that physical changes need to be accompanied by promotional campaigns. The report is available at: www.minneapolismn.gov/www/groups/public/@health/documents/webcontent/convert_256590.pdf