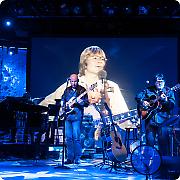 John Denver: A Rocky Mountain High Concert came to the State Theatre in Minneapolis on Sunday, February 17 for one evening. The concert, a tribute to John Denver, gave those in attendance the opportunity to pay homage to a much-beloved singer, songwriter, humanitarian and conservationist.

John Denver began his music career in Los Angeles in 1963, spending several years performing as a member of most notably the Chad Mitchell Trio. Eventually, he decided to pursue a solo tour and released his first album. At the same time a song he had written was renamed Leaving on a Jet Plane, and became a hit for Peter, Paul and Mary. This initial success led Denver to launch a promotional tour through the Midwest, playing for free wherever he could find an audience and selling his records. This tour convinced RCA to give him a contract and created a solid fan base that stayed with him throughout his career. While performing at Gustavus Adolphus College in St. Peter, MN he met his first wife Annie Martell. They were married and lived in Edina, MN from 1968–1971.

Denver relocated to Aspen, Colorado in 1971 and lived in the same home there until his death in 1997. The show does not touch on the tragedies and struggles that Denver dealt with in his later years, stemming from alcohol abuse. Instead it is a loving tribute by three of Denver’s original touring band members–Jim Horn, Chris Nole and Alan Deremo, who clearly want everyone to remember and focus on all of the great things he accomplished. Accompanied by a drummer and a string section they played the music from Denver’s songs while video of Denver performing played on a large screen. Each of the band members was given an opportunity to reminisce about Denver and their experiences performing with him. Jim Horn is a renowned saxophonist and woodwind musician on his own and many in the audience were clearly familiar with his work.

The band received permission from the Denver family and estate to use footage of Denver in concert that has not been seen for 15 years. Many times the band members were  seen playing in the videos as they played the same music on stage. In addition to concert footage there were also films of Denver speaking about his humanitarian and conservation efforts. He championed numerous causes including world hunger, homelessness, the AIDS epidemic in Africa, environmental issues, sustainability and many more. He was given the National Wildlife Federation Conservation Achievement Award in 1990.

This concert was not only a tribute to Denver but a chance for all of us to remember him and to have a new appreciation for how forward-looking he was in the causes he fought for. Most importantly it was an opportunity for a group of Denver’s friends and colleagues to say thank you to John Denver the man.