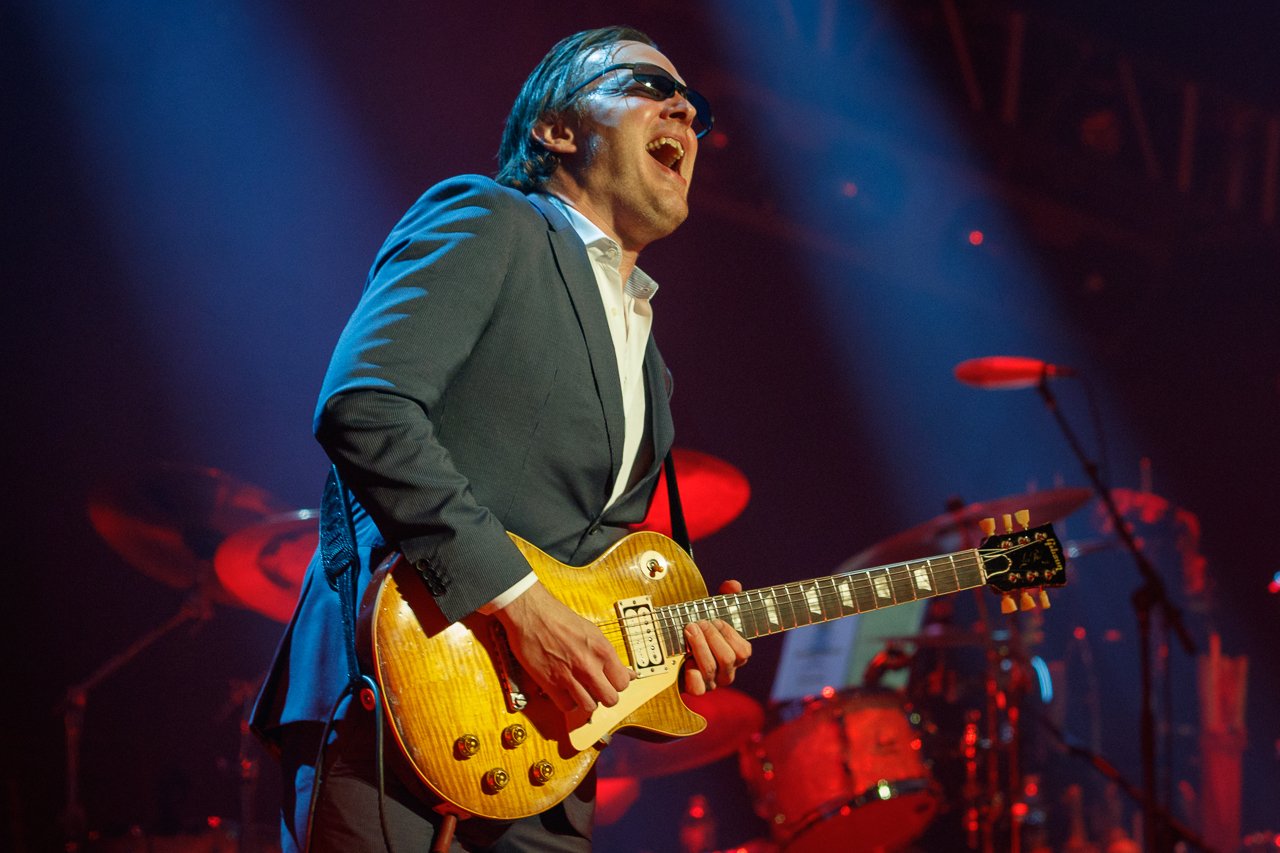 Have you noticed lately that most mainstream music we’re being fed is severely guitar solo deficient? Music fans in Minneapolis had an exceptional opportunity to supplement their listening diet at the Orpheum Theater April 24th with a heavy dose of Vitamin JB. Fortunately there is no limit to the amount of Joe Bonamassa guitar mastery one can consume, which is why I expect many of the same faces will be back to the Orpheum Theater again Saturday night April 25th as demand warrented a second performance.

No doubt Bonamassa is an outstanding natural guitar talent, which got him noticed at the young age of 12 opening for BB King. Unfortunately, it takes a lot more than that for any musician to gain worldwide recognition, particularly in a niche genre like the Blues. Joe clearly has extraordinary drive and a tireless work ethic that has kept him playing hundreds of shows annually and branching out to numerous creative projects over the last 26 years in the business. His efforts have paid off and he is currently at the top of his game and very capable of putting on a first rate show as witnessed tonight in Minneapolis. Bonamassa requires no opening act considering his 16 song set list alone extends out beyond the 2 hour mark.

Joe brought infectious energy to the stage classed up in his usual suit and sunglasses combo and warmed up the strings on a sea foam green Gibson playing “Hey Baby” and “Oh Beautiful” with his 7-piece band joining along behind him. Bonamassa took us down to the Bayou with some feverish slide work to start out “Trouble Town”, one of a couple tunes he switches over to a Stratocaster. The tune allowed for the percussionist to shine and it was nice to see the light show actually synched up with the big drum beats, another fine example of how put together this show is. “Double Trouble” provided a thick helping of Blues and was a standout that got great crowd reaction as soon as Joe perfectly attacked the first couple notes. It was poetic to feature longtime Stevie Ray Vaughan keyboard player Reese Wynans on this tune who Bonamassa later made mention of his 2015 induction into the Rock N Roll Hall of Fame. The easy grooving “Look Over Yonders Wall” included an smokey jazz club breakdown led by the horn section and even had room for few rare strikes of a triangle that added just the right touch.

By this time, Joe had played straight through nearly half the set list and finally took a break to address the audience. He reminisced about coming to Minnesota early in his career and playing double headers with a Monday night at O’Garas in St. Paul followed by a Tuesday night show at the Cabooze where he would open for SKA and Reggae bands. Quite a change this time around headlining 2 nights at this fine theater to which he graciously commented “I’m a very F’ing grateful man, so thanks for coming out.” Keeping with the hometown theme, Joe brought out very special guest and Minneapolis resident Brian Setzer to help out on several selections starting with “Further on up the Road”. Leathered up in black pants, vest and a blood red shirt, Setzer worked in a Stay Cats-esque solo before thrilling fans by joining Bonamassa at the front of the stage to trade off licks in an epic 6-string duel. Setzer showed off some of his range with a jazzy solo on “Blues Deluxe”, which also ended up being Joe’s best vocal offering of the night.

Bonamassa’s most popular songs came near the shows end as the moody start of “Sloe Gin” demonstrated his dynamic range and ability to shift and control the flow and energy of a performance. Additionally, the smooth and stylish bass runs by Carmine Rojas seemed to really stand out during this one. In similar fashion, the set closer “Ballad of John Henry” provoked an almost angry vibe with one of the evening’s heaviest drum and bass grooves fittingly accented by a flashing red light show. Although a great track, it wouldn’t be right to end on such a dark themed tune. Fans demanded an encore and the upbeat and fun “All Aboard” was a fitting choice to send people on their way with a great vibe and memories to take home from a spectacular evening.