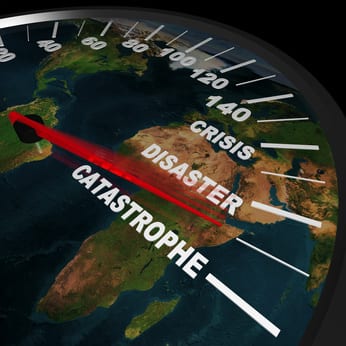 A few weeks ago the New York Times published an article with a painting of an ethereal iceberg and the headline, “Where Did Global Warming Go?” It’s a fair question, and one that many people brought up at four in-person community conversations about the environment. The conversations were part of the Twin Cities Daily Planet’s ongoing coverage on the New Normal.

A few years ago when people talked about the environment they talked about global warming. According to an annual Gallup Poll Americans’ concerns about global warming peaked in 2008 and have steadily declined since. Now, it seems as though it’s practically off the table, according to environmentalists who attended our New Normal conversations at the Wilder Foundation, the St. Paul chapter of the Audubon Society, the Capitol River District Council, and Land Stewardship Project.

“It’s the big gorilla in the room,” said Val Cunningham, the environmental co-chair of the St. Paul chapter of the Audubon Society. “The gorilla nobody wants to talk about anymore.”

That’s not true for environmentalists, who still see global warming as the biggest problem confronting both global and local communities. That being said, the 50 participants who attended our conversations were concerned about local and regional issues like mining in Northern Minnesota, regulation of pollutants to wild rice beds, the drastic decline of wildlife species across the state, the continued use of pesticides in large scale farming, Asian Carp and other invasive species, and water quality in general. People also acknowledged the gaining momentum of the sustainable agriculture movement, and a push for better metro transportation.

“But they’re all small potatoes because they’re all really about climate change,” said Cunningham’s co-chair, Susan Solterman. “They’re incredibly important, but they’re a piece of the pie.”

Solterman, a former environmental lobbyist who now works in the lumber industry, feels betrayed by President Obama and state politicians, particularly Amy Klobuchar, who she perceives as having put global warming on the backburner. Her disillusionment with Obama, Klobuchar and others reflects many environmentalists’ great disappointment in the post-Bush era of environmental policy. For Solderman, the conversation should be about addressing global warming through fundamental changes in the way we live in and organize our society.

Instead, Solterman and Cunningham said, the conversation is about jobs and that’s a threat to the environment.

“If you pit the environment against jobs, we’ll lose every time,” Cunningham said.  The problem, as Cunningham sees it, is ideological.

“We’re fighting two really strong slogans,” she said. “The first is ‘We need more jobs and we’ll sacrifice the environment for them,’ and the other is ‘Energy independence at any cost.’”

For some, the big picture of sustainability and global warming is a secondary or tertiary concern. Their major concern is: How is America going to stay economically competitive in a global market, and where do renewable energy and natural resources fit in to that picture?

No one embodied this as much as Eric Anderson, a member of the environment, transportation and planning committee at his district council in downtown St. Paul.

Anderson cares about environmental issues but he ties them to jobs, industry and America’s future competitiveness. He uses the language of business, competition, renewable energy and innovation.

Anderson, a recent gradate of Brown College who studied radio and is currently looking for work, is not sure why broader environmental issues don’t concern him more. He says maybe it’s because he’s young, or that he’s had good luck, or even thinks he could be being naïve. Either way, he says environmentalists are too concerned that corporations are going destroy the environment, and cites the River Center’s use of solar panels as an example of companies doing the right thing and taking advantage of stimulus money.

Anderson’s comments reflect a set of priorities that seem to parallel an emerging mantra in state and national policy making. There is a sense that renewable energy is important, but less of a priority on attacking global warming. (The chair of the Minnesota Senate committee has even stated that climate change is “a farce” and a “fallacy”.) Even if policy makers do theorteically understand the urgency of global warming, it is simply not as pressing as jobs, and the short term need for fossil fuels.

Take, for instance the Keystone XL pipeline and American lawmakers’ embracing of it despite environmentalists’ strong objections and scientists’ warnings of the implications for climate change. Or state legislators’ reluctance to curtail mining in Northern Minnesota because mining creates legitimately needed jobs in the region (and eventually translates into votes).

Anderson and Cunningham, the Audubon member who was frustrated about the “Jobs vs. Environment” debate, weren’t at the same meeting, but I wondered, if they had been, what would have transpired — if their conversation simply would have mimicked statewide debates on environmental policy.

Hunter and Keo listened intently as people debated the pros and cons of sulfide mining in Northern Minnesota, with one person making the pro-jobs argument, and others making the environmental impacts argument.

“It’s really impressive and kind of intimidating,” said Hunter, who probably knows more about global warming than most due to her school project. “All these adults know so much about this and have so many ideas about what to do.”

It’s true. Now if only we could agree on what to do.