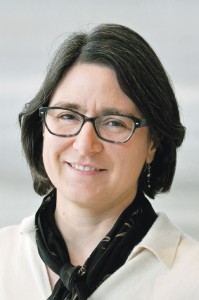 A recent Minnesota Department of Employment and Economic Development (DEED) survey found that job vacancies in Minnesota have risen 18 percent over a year ago, the highest in seven years.

DEED Assistant Labor Market Information Director Oriane Casale, in an interview with the MSR last week, said, “I think…the most interesting thing…was the ratio between the number of job seekers and the number of job vacancies,” pointing to the findings that noted there were 2.6 unemployed people for each job vacancy, compared to 3.2 unemployed persons per vacancy a year ago. “It had been up to over eight people per vacancy during the recession.”

The DEED Job Vacancies Survey, which was released in February, is used to show hiring demand by employers as well as a leading indicator of economic activity, and is conducted twice annually. Healthcare and social assistance (20.1 percent) had the most job vacancies, followed by retail trade (14 percent), accommodation and food services (11.5 percent), manufacturing (9.2 percent) and finance and insurance (7.6 percent).

Furthermore, the survey noted that the most job vacancies (62 percent) were reported by middle-sized firms (10 to 249 employees), followed by large firms (23.6 percent). Small firms (fewer than 10 employees) accounted for 14 percent of the job openings.

Casale admitted, however, that it’s unclear how many of the nearly 60,000 reported job vacancies by companies in the fourth quarter of 2012 will help reduce the current unemployment rate among state Blacks, which at 13.8 percent is almost three times higher than the 5.8 overall jobless rate and 5.2 White jobless rate in Minnesota.

An October 2012 DEED report earlier showed that Blacks on average are unemployed longer (53 weeks) than Whites (28.6 weeks), Asians (47.9 weeks) and Latinos (21 weeks). Also, Black Minnesotans on average look for full-time work 12 percent longer than Whites, six and a half percent more than Latinos, but only a percent less than Asians. 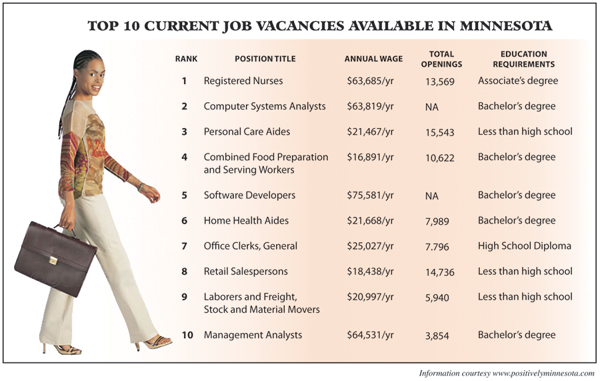 “In terms of what jobs are available and how the economy is basically improving across the board, I’m not really sure how this report would be any different for Blacks than it would be for anybody else,” Casale continued. “There is obviously a huge disparity between Blacks and Whites in Minnesota. That is very concerning to me.”

According to DEED, there are at least 318 Occupations in Demand (OID) in the seven-county Twin Cities area. Nearly 60 percent of the 34,400 openings are in the area, and 24,460 openings are in Greater Minnesota. Among the top 10 “five star” jobs in demand are registered nurses, personal care aides, and retail salespersons, ranking first, third and eighth respectively (see chart).

Minneapolis Community and Technical College (MCTC) Director of Career Services Dionna Jones said that the school regularly informs students through open houses and other in-house marketing strategies. “We communicated certain jobs that are in demand or can get high placement rates and good wages,” she explained. “A lot of that is communicated on our on-line presence and communicated to prospective students.”

The local job market has improved since 2008 — “It was dark and dreary five years ago,” recalled Jones.

Casale suggested job seekers go to her agency’s website (www.positivelyminnesota.com) for the entire OID list. “It doesn’t just rank occupations based on demand, but it also actually provides a starting wage and also tells you how much education is expected for that occupation. If people are looking to go back to school or they’re looking for career opportunities, it might be a good place for them to look.

“If you are going to school and pay money,” she said, “you kind of need to know that there is going to be a job at the other end that would allow [you] to pay back [your] loans.”

MCTC has a pre-nursing program, but according to Jones, her department doesn’t try to steer students (whose average age is 28 years old) toward any particular profession. “We don’t tell people what areas they should go in,” she said.

“We give them information so that they can make an educated decision. If they don’t have the information, they can’t make a decision. Our goal is to really help them make a decision on the job that is right for them as a person and a lifestyle, their skills and interests, and be successful in it as well.”

“If Black teen unemployment is so high, these are people who want to get a job and are actively looking for work,” Casele added. “When they can’t get a job and they look around and 30 percent of their peers also can’t find work, I think that can really turn teens off to what it means to work. That can be extremely discouraging for teenagers who may never have [had] a job before.”

The low availability of youth-oriented job programs might be a possible cause, Casale believes. “I think a lot of the programs either have shrunk down to be very, very small or completely just gone away,” she says.

“What surprised us with this survey is that it’s not just the education component; it’s not just that employers are only looking for people coming out with either a four-year degree or a two-year degree; [but] they’re looking for hard-working [youth] coming right out of high school,” said Casale, adding that “long-haul truck drivers” also are in high demand.

DEED also examined “the skills gap issue,” explained Casale. “The one thing that really surprised me is that manufacturing companies say that they want kids straight out of high school with a good work ethic, show up every day, and are willing to work hard…and are not afraid to work with their hands, making things and working with machines.

“This could be a great opportunity for kids who don’t have an interest in going to college. These are potentially career-oriented jobs, whereas you get your foot in the door and you show that you have some skills in this area, you could move up to be a machinist and make $20-25 dollars an hour. But the manufacturers are saying they are having a hard time finding these people.

“We interpreted that as they don’t know how to look for these people, not hooking up with the high schools or not willing to do on-the-job training,” she surmised.

Despite the DEED report showing positive signs that the state economy is improving, “It is still a tough job market for a lot of people,” said Casale.