Earlier this week a Washington Post article (The Recovery is Racist) made the Twitter and Facebook rounds. It showed nationally, black men have lost the most ground in employment relative to their total population. While the rest of the population lost anywhere from 5.5 to 7.9 points in the employment-to-population ration for their respective race and gender, the drop for black men was nearly 14 points.

With some numbers crunching from our partners over at the Jobs Now Coalition, we examined the Minnesota numbers to see if there’s a similar trend here.

As the graph below illustrates, Hispanic men lost the most ground in the workforce relative to their total population. However, because Hispanic men started out with a state high 85.7% workforce participation rate, relative to their population, their 10 point decline still puts them ahead of the state’s 71.1% participation rate for men in 2012. Asian women lost the second most workers as a percentage of their total population employed. Black and Asian men had similar declines dropping to 59.3% and 76.9% respectively. 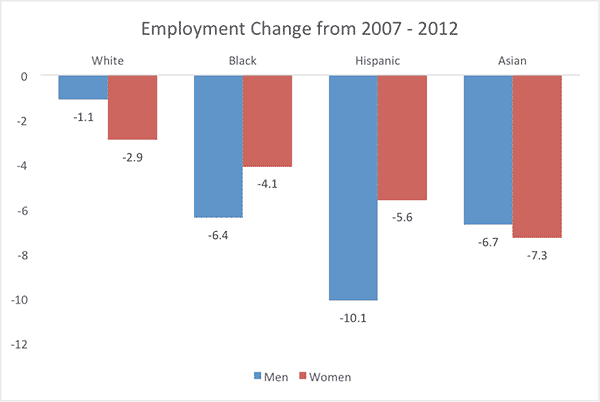 “All Minnesotans are seeing a decline during the 6 years from 2007 to 2012 in the percentage of the population who are employed, but Minnesotans of color are seeing the greatest declines,” said John Clay, policy director for Jobs Now Coalition in Saint Paul.

While these numbers remind us again just how uneven our recovery is, what they don’t tell us is the quality of jobs workers retained. Now that job vacancies are are edging upward, DEED’s latest numbers as analyzed by the Jobs Now Coalition, show that half of new openings are part time and that more than half require little more than a high school diploma. Those trends are starting to show in people’s pocketbook, with Minnesota’s household income dropping by more than 8% when adjusted for inflation over the last decade.

We need to do a better job ensuring that the recovery is fair for all workers and that we have a true economic recovery, not just one that looks good on statistical reports.