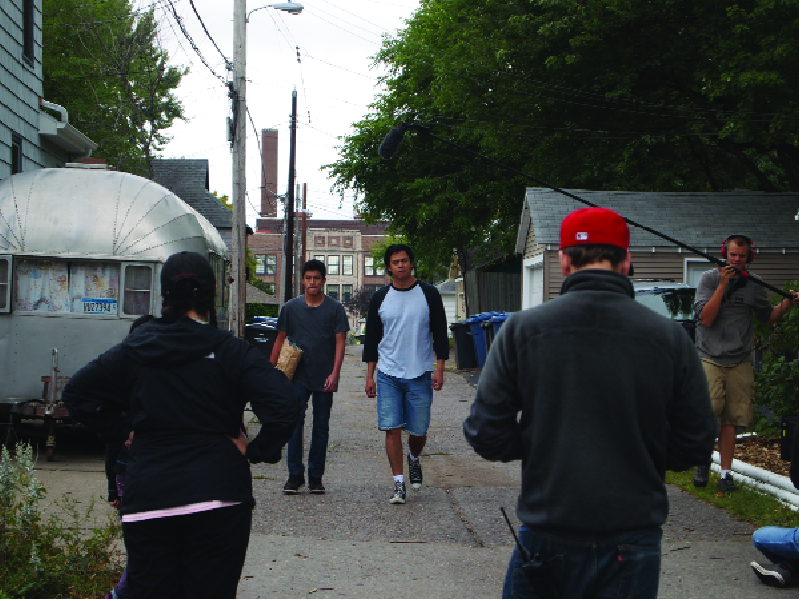 Chaske Spencer (right) and Mauricimo Sanchez-Hohenstein have a conversation walking down the alley. Between scenes, Spencer said he does mostly bigger films but likes independent productions, too. “This is a cool place, I like this town, it’s definitely dope.”

Yes, that was Chaske Spencer walking down the alley near Edison High School, and hanging out talking on his cell phone last week. He stars in “an immigrant story,” The Jingle Dress, about an Ojibwe family that moves from the White Earth Indian Reservation in northern Minnesota to Minneapolis. It becomes a murder mystery.

“We follow the Red Elk family as they discover a new culture and through their experiences and unvarnished perspective we are able to view our own Minnesota culture with fresh eyes, as well as gain insight into an ancient, indigenous society,” reads the movie synopsis.

Locations in and around Northeast’s Jackson Park, plus Nicollet Island will appear in this feature film that will be Minnesota’s first to receive Legacy money, an up to $175,000 reimbursement grant. It’s one of three recently awarded, and they all touched Northeast in some way.

Once the film is completed to the rough cut edit stage, the state will reimburse payments made to Minnesota companies for everything involved, “except catering,” said Meighan McGuire, co-producer. It’s destined for independent theaters as there is no distribution deal yet, she said. All of the crew is local.

The scenes shot in Northeast represent a movie set in the Phillips neighborhood. The Jingle Dress also filmed at the Hastings Mill Ruins, McGuire said.

Ironically, the main character in another film awarded the grant, Lawnmower Mafia, was Thomas, a 10-year-old Minneapolis “nordeaster.” The filmmaker ran into problems with other funding and figured he could not finish by the deadline, so withdrew from the program, according to an August 2013 contract report by the Minnesota Film and TV Board.

A third narrative feature loosely set in Northeast, by Patrick Coyle, is The Public Domain, described in the grant announcement: “ Four fictional characters are trying to get home in one way or another when their lives are forever altered due to the I-35W bridge collapse. One fateful night five years later these same individuals are drawn to The Public Domain, a bar that has lived in the shadow of the bridge for decades. That night is the feast of St. Casimir, the Patron Saint of Poland, and the biggest party of the year at this Northeast neighborhood dive where desire, guilt, ambition and fear are served up with pierogi, Polish vodka and, hopefully, a modicum of redemption.” Perhaps we’ll run into them filming (production was scheduled to start in September). 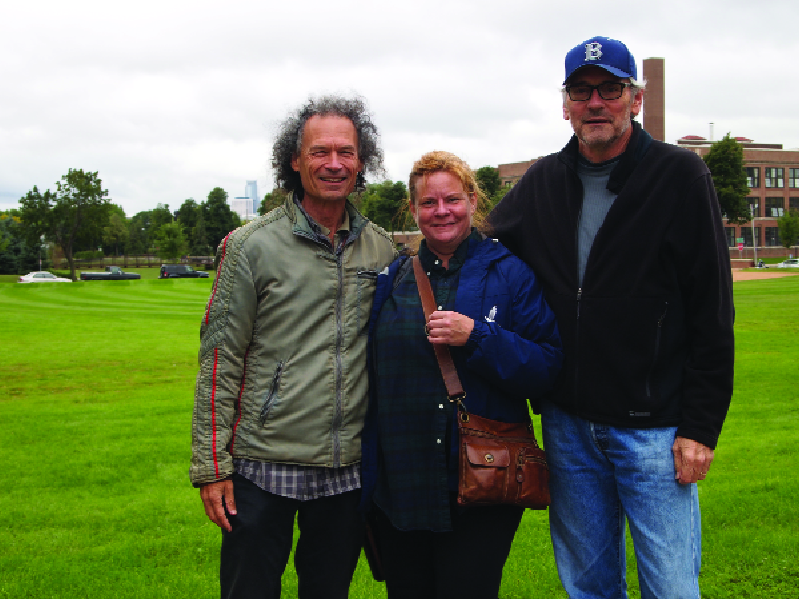 As the Jingle Dress cameraman prepared to shoot the alley scene, we stood talking, interrupted by cars driving by. “Whatcha doin’?” one driver asked. “Making a movie, what are you doing?” McGuire answered as he continued on, a scene repeated shortly thereafter. By Sept. 27, they were wrapping up all filming.

“It takes time to educate communities about what it means to be a filming location. We’re maybe 20-25 people with very little footprint. Anything we bring, we take away at the end of the day. We’ve enjoyed really good support from the parks and the City of Minneapolis,” McGuire said.