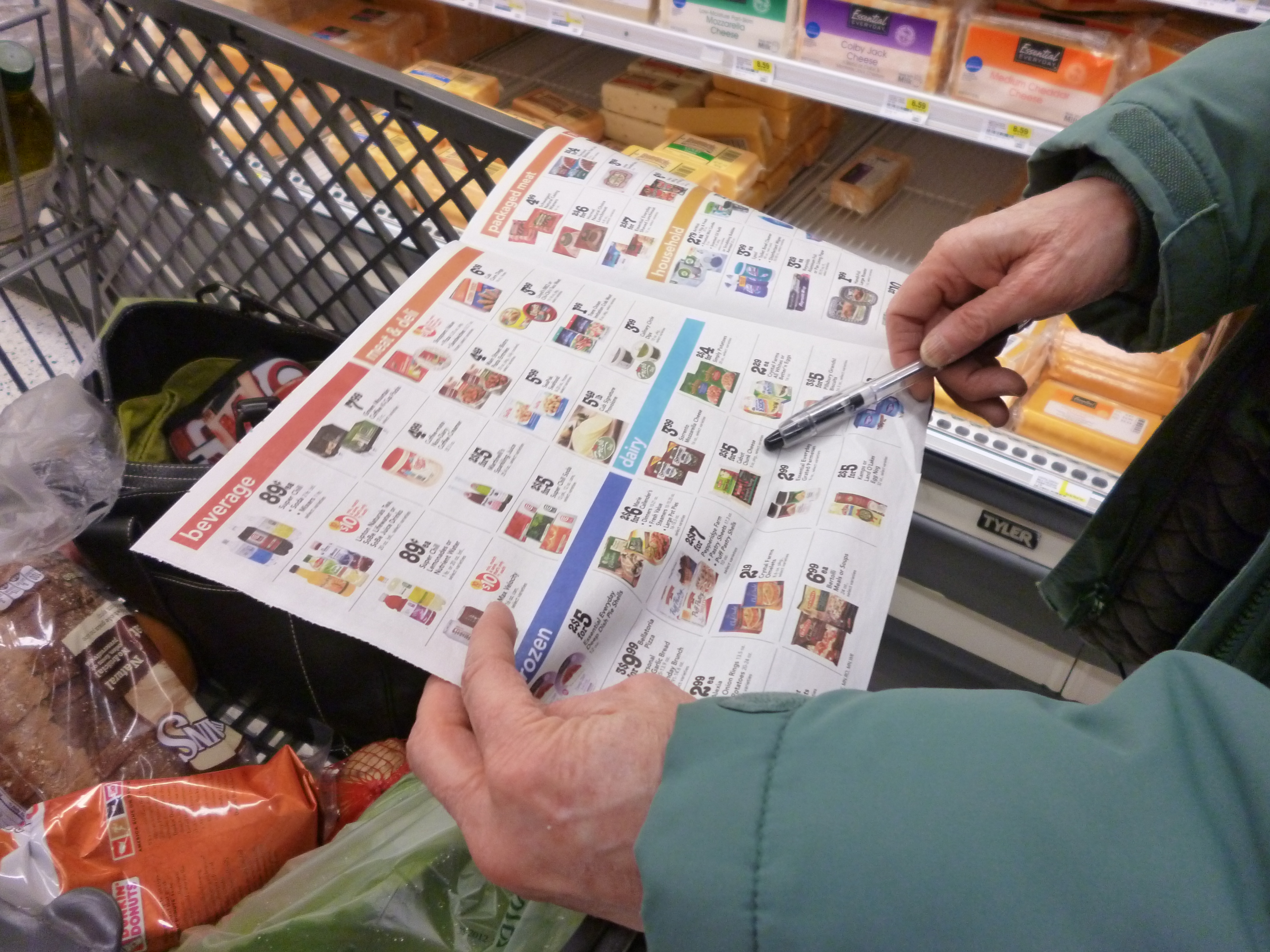 Can we imagine what does it mean to live on a food allowance of $31.50 per week?  Participants in the Twin Cities  Food Stamp Challenge week, November 11-18, now have a lot better idea of what it takes.  Members of 15  groups took the Food Stamp Challenge from November 11–18.  They  tried to buy groceries from the $31.50 allowance that is the national average per person for food stamp recipients, and to eat for one week just from the purchased goods.

This year was the second time that Rabbi Amy Eilberg had participated in the challenge and she had already made a list of essential things she wanted to buy. As she talked about her list at the opening gathering on November 11, one of the listeners raised his hand.

The man asked:  “Is anyone here poor?” Nobody raised his hand.

55-year-old, Dennis Boe then said, “Because I am.” He got excited and claimed that this challenge would just be a game. The participants could not shop without looking at the ads. Boe said he has to live on disability checks and about $20 a month of food stamps. He has to live this game every month.

The hall was very quiet and the participants listened carefully to what Boe said. Rabbi Eilberg thanked Boe for his tips and for sharing his experience with the audience.

After the introductory meeting, the group walked to Cub Foods, where they had to buy their groceries.

This experience was more challenging than expected and brought up a lot of questions:

Ahmed Rabi, religious director at the Islamic Center of Minnesota, was surprised at how hard it was to do the shopping. He avoided his Halal meat because it is too expensive. As a Muslim, he knows how to fast, as Muslims celebrate Ramadan with a month of fasting each year. The time of Ramadan reminds Muslims of how poor people suffer.  Even though Rabi fasts at least two days a week, he thought that eating on a specific budget is more difficult than eating nothing.

Laurie Radovsky, a Jewish doctor and member of Beth Jacob Congregation said that Muslims and Jews have more in common when it comes to food issues. Like Rabi, she did without kosher meat during the week but she still tried to eat healthy. Learn more about Laurie and her way of eating healthy despite the Food Stamp Challenge.

Patricia Lull, Lutheran pastor and executive director of the St. Paul Area Council of Churches, shared her experiences on Facebook.

Lull wrote:  “Biggest learning? The meals are simple and fine. But this cooking takes more time and planning that I usually give to food. I remember tonight how hard so many women around the world work to feed their households.”

On Saturday, Lull posted: “Food Stamp Challenge – near the end. I’ve spent most of my money now, having bought popcorn and a lovely, ripe pear. Both were good choices for the loose change in my pocket. Why do coins beg to be spent instead of saved? James, the grocery clerk, saved me $.20 when he swiped a generic member coupon. I’m giving thanks tonight for cashiers and sales reps who harp less and serve more.”

This challenge might be just for a short time and maybe does not reflect the reality that thousands of people have to deal with every day. But this challenge opened eyes and made people thankful for what they have. It questioned our daily overloaded consumption and brought awareness to hunger issues.

On Sunday, November 18, participants, organizers and representatives of hunger organizations came together to discuss one week of experience.

Rabbi Amy Eilberg introduced the circle and summarized the happenings of the last week.

Before the discussion circle, around 20 participants of the Food Stamp Challenge came together to prepare and serve a meal at “The Family Place” in St. Paul.

During the circle, participants Rabbi Harold Kravitz and Asad Zaman shared their experiences from the week.

Asad Zaman of the Muslim American Society did not succeed in finishing the Food Stamp Challenge because he had to travel and had two business lunches. Zaman said he realized that people can survive with a $31.50 food budget but the diet is very one-sided as people don’t have the possibility to buy a variety of food. Zaman is convinced that the human body wants change. He said this challenge showed him human weakness and he hopes that this helped him to grow.

All participants agreed that this challenge was just the first step of a lot of work that still has to be done. Despite the fact, that there are already a lot of organizations fighting hunger – it is not enough.

Margaret Lovejoy, the founder of The Family Place explained what her organization does to feed people. To Lovejoy, it is important that the volunteers sit and eat with the families for whom they have prepared the food. This gives an extra understanding of those who are in need. The Family Place tries to teach people how to prepare healthier food because they are not used to it. Before preparing the meals, the volunteers display unknown food so the people know what they are eating. This makes it easier for the families to recognize and buy the food in a store.

Asad Zaman told the story of how he started food shelves in his neighborhood in Inver Grove Heights.

His motivation was driven by the chapter 107 of the Koran which is entitled “The small kindness.” Zaman further quoted a Hadith, which are the sayings of Prophet Muhammad : “He is not a believer who eats his fill while his neighbor is hungry.”

First, he thought that his food shelf wouldn’t feed a lot of people. Now, there are around 100 people who are coming regularly. Zaman dreams of a future where people would ask him, why he doesn’t have a food shelf any longer. And he could answer: “Because there are not enough hungry people.”

Scott Grayson represented the Mazon Hunger Initiative: Minnesota, which sets the focus on children who don’t have enough to eat. Schools are serving reduced lunch which offers children a lunch for 40 cents per meal. The Mazon Hunger Initiative fights for greater support for these lunches as children who are hungry cannot perform well in school. The initiative tries to train people, so they can meet and discuss with school board members or legislators to support, for example, SNAP or the farm bill.

The idea of Muslims, Christians and Jews coming together and helping people was another important purpose of the food stamp challenge.

On TV, people see so much hate, crime and war against and between religious groups, that people forget that this is the exception. Muslims, Christians and Jews, despite their differences, have in common that they care about the needy and the poor. Each religion and each community that participated means a place of refuge and help.

United Against Hunger: An Interfaith Partnership continues to work on the important challenges and hopes that this event brought people together and connected them in the common hope to defeat hunger. During this week, 15 faith communities came together and worked together. Rabbi Eilberg stressed that, “Things that we can do together, we must do together”.

The circle ended with a prayer or reflection of every single religion that was represented that day .

The Challenge was sponsored by United Against Hunger: An Interfaith Partnership and the Jay Phillips Center for Interfaith Learning at St. Thomas University. 15 religious communities from the Twin Cities area supported this event, .

Rabbi Amy Eilberg, member of Beth Jacob Congregation and employee at the Jay Phillips Center for Interfaith Learning, said she was proud to have Muslims, Christians and Jews together working for this project. She knew that the challenge would be just “a tiny, tiny glimpse of what it’s like” to live from Food Stamps. However, Rabbi Eilberg was sure that the participants will learn a lot from this challenge and hoped that this challenge will raise the awareness for hunger problems.

The participating communities were: