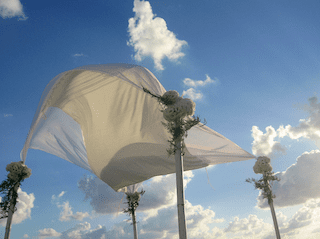 It was 10 years ago this week that the State of Minnesota (and Temple Israel‘s Rabbi Glaser) officially pronounced me a husband. So as the memories come flooding back to me, I feel it’s as good a time as any to present my version of the Jewish Wedding Throwdown.

I was born and raised in New York City – where many Jewish weddings, like property taxes and commute times, are so far removed from the reality of the rest of the world that they appear to be normal. Frankly, after having attended quite a few out East, I was looking forward to planning my big day right here in Minneapolis. I knew it would be different than what I was used to and I welcomed those differences with open arms.

Here’s my breakdown of the 5 things that have had the most lasting impact 10 years on.

The Cocktail Hour has become the place to throw in some creativity in typically bland spaces, i.e. the ballroom of a synagogue. So with the limitations of a kosher mega buffet, there might be the kosher hot dog cart or the make-your-own dry burger bar or even the mushy-sushi-made-hours before-table. E for effort, but no T for taste. I usually end up full, but not satisfied.

All of that before you even sit down to eat dinner – which will consist of a few courses but always 3-6 choices for an entree. In New York, you select your entree at the table and the wedding catering machine has plenty of pre-cooked food waiting in the kitchen. In the TC, you send back a reply card with your choice so the caterer knows just how much of each item to prepare.

My mother couldn’t fathom that we were not offering salmon. It became the biggest source of fighting we’ve ever had – all over a piece of overcooked farm-raised fish. The years have made her realize how silly that incident was and it has become an inside joke – but it was the clearest sign to her that Minneapolis could have been Mars.

In New York, wedding receptions tend to be spread out over time – so the courses are indeed courses and not just a succession of plates on and off the table as soon as possible. In the TC, you sit, you eat the entire meal, and then the reception begins. We always found the former to be more enjoyable so we brought that idea with us. At the TC weddings we had attended, guests left earlier and cut short the fun. Truth be told, the caterers were very skeptical about our plans, but they did indeed pull it off.

Most of the NYC weddings I have attended have been formal affairs with tons of penguin suits and ball gowns. The rare blazer and khakis getup stands out like Michelle Bachmann at a gay pride parade. On the contrary (and on more than one occasion), here in the TC, I have been better dressed than every guy not in the bridal party. Don’t get me wrong – I’m the guy who refused to wear socks until mid-September. Casual is my middle name. But if the groom is wearing a tux and the bride spent $5000 on a dress, then dress the part.

I guess yarmulkes count as attire, right? Well, I was a bit surprised with how many men (and Jewish ones too) didn’t bother to put one on at our Temple Israel wedding. Reform I know, but still. I’ve been to plenty of Jewish weddings in New York where non-Jewish guys put on the yarmulke as a sign of respect to the building – nothing more.

This ties into #3 above. New York weddings always strike me as being very formal and anything off script can be a recipe for disaster. Part of the problem for me is that there actually does appear to be a script – and that is why I rarely can tell one wedding from the next. Maybe it’s like eating at a popular restaurant in NYC – where the host/hostess times each table’s meal. The TC weddings I have attended have had many more spontaneous moments, off-script speeches, and genuine feeling.

Many New York wedding receptions take place in the ballroom of a synagogue. Often times, neither bride nor groom is a member of said synagogue – but it might be known in wedding circles to have a good caterer. Of course, a synagogue ballroom requires 100% kosher food. I’m sure I’ll get a comment about this, but I’ve never eaten kosher wedding food and walked away thinking it was super tasty. What’s funny is that I’ve been to kosher weddings and no one was even kosher.

In the TC, most synagogues that I know just don’t have a wedding-quality ballroom – so the receptions are held elsewhere. This allows for some creativity and originality in planning and executing a wedding. There is just so much you can do with a flat, empty room and a lack of shrimp cocktail.

I’m curious to know what other geographical differences are out there. Is Chicago like Minneapolis? LA like NYC? Anyone have a Jewish wedding in Texas?

Regardless, our wedding was fantastic and I have no complaints other than I’m 10 years older and I wish we could do it again. So instead of reliving our Hawaiian honeymoon as originally planned or renewing our vows with a Jewish Elvis in Vegas, we’ll pop in the wedding video (now on crystal clear DVD), fast forward to the good parts, and be in bed by 11:00 (but up again at midnight to feed the baby).