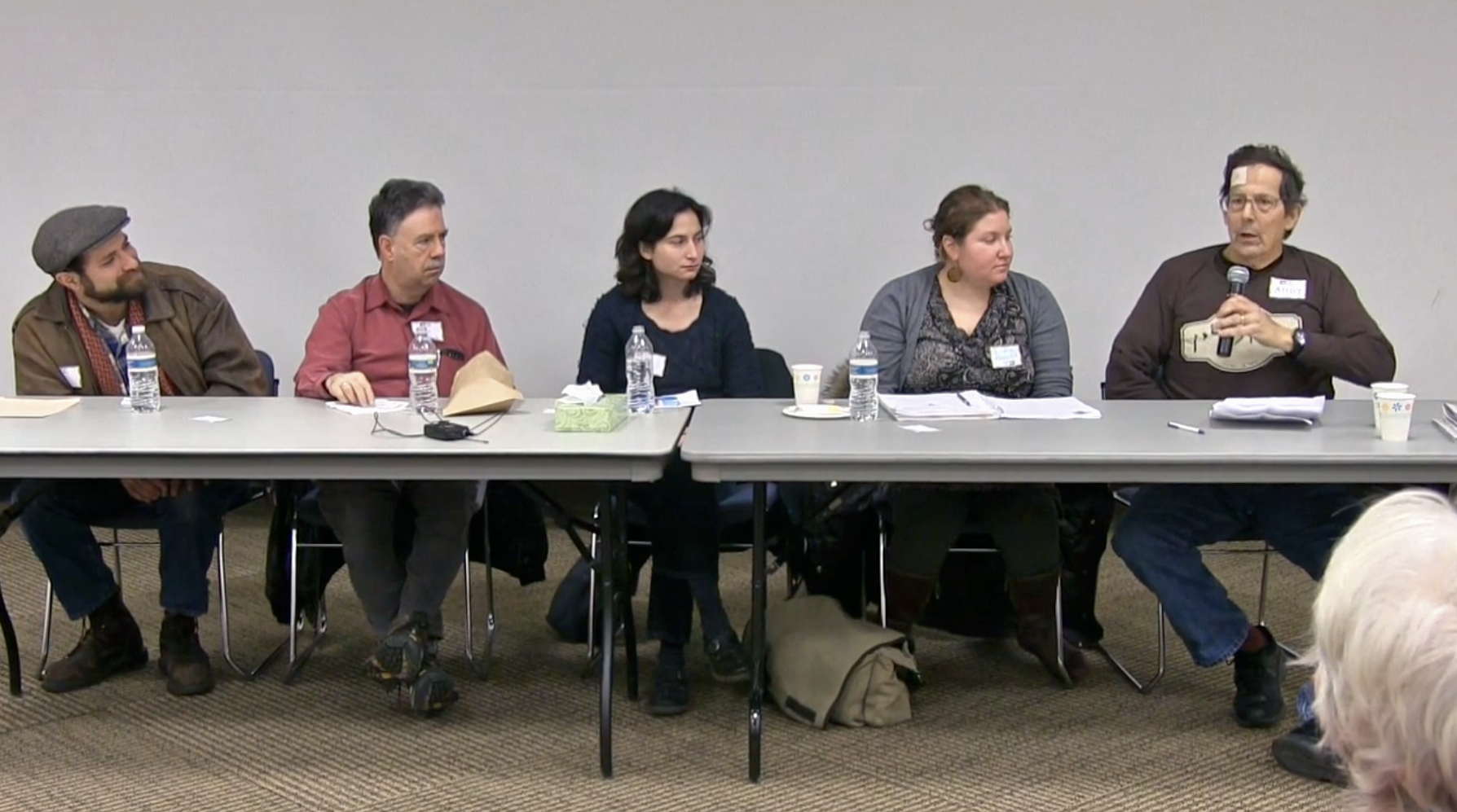 Members of Jewish Voice for Peace Minnesota formed a December 13th panel to discuss their journeys as Jewish people to speak out on behalf of Palestinian rights in Israel at. From the left:  Marc Trius, Allan Malkis, Marisa Katz, Ilana Rossoff and Andy Berman. The forum was sponsored by Women Against Military Madness and Middle East Peace Now.

Five local members of Jewish Voice for Peace, a national campaign for Palestinian justice in Israel, are featured on the new edition of Democratic Visions, the political issues program I produce out of the southwest suburbs.

The JVP members were panelists at a December 13th forum at the Southdale Library in Edina.  Video clips of the forum combined with additional perspective shared later by lead panelist Andy Berman arc into highly personal stories about being Jewish and coming to reject Israel’s political, economic and military actions towards Gaza, the West Bank and Palestinians.

Berman began the forum with this statement:  “I suspect that a common theme we’ll be hearing today is that our solidarity with the Palestinian people and all our work for peace and justice, is deeply rooted in our Jewish identity.”

Panelist Marc Trius was born in Russia but grew up and was educated in Haifa, Israel.  He speaks poignantly of situations that turned him into a critic of the Israel government and its defense force with personal anecdotes; one of them is about a picnic held in a park where once stood Palestinian homes.

Marisa Katz grew up in Georgia “with a proud Zionist family history and background.”  Katz attended Jewish summer camps and as a high school student took a study trip to Israel.  She says that she found Israel fascinating but came to feel that the visit was less about education and more about recruiting future citizens.  And then, during college in Ohio, Katz recounts that she began to read and discuss other perspectives.

Ilana Rossoff grew up in New Jersey.  Her father is a Reformed Rabbi.  She says that she began asking why reported wartime body counts for Israel were significantly lower than those for its enemies in each conflict.  Andy Berman and Allan Malkis have long lived in Minnesota but grew up in New York City.  Each tells how he has measured the devotion of their respective families to the Jewish traditions of working for social justice and peace against the record of Israel in the mid east.

House Speaker John Boehner’s invitation to Israeli Prime Minister Benjamin Netanyahu to address Congress was made after the Jewish Voice for Peace MN forum in Edina.   As Washington’s pro/con posturing sparked by the March 3 Netanyahu-Boehner tag team show becomes amplified by mainstream media, Democratic Visions is providing these 5 small but resonant voices a broader reach.  Click here to link to the 23-minute long Democratic Visions presentation which is an edited representation of the 90 minute forum.  The complete, on-line video presentation is available here on Vimeo at Bill Sorem Videos.

Segments and full half hours of Democratic Visions are archived on YouTube –   www.youtube.com/user/DemocraticVisions/

Democratic Visions is independently produced by Eden Prairie, Minnetonka and Edina volunteers at the Bloomington Community Access TV.  The community cable access program is not funded, endorsed or supported by any political party or political action committee.