My first review of Rye Deli was received well by most and not so well by a select few, but as I said then (and I’ll say it again now), a new restaurant deserves a chance to work out the kinks. 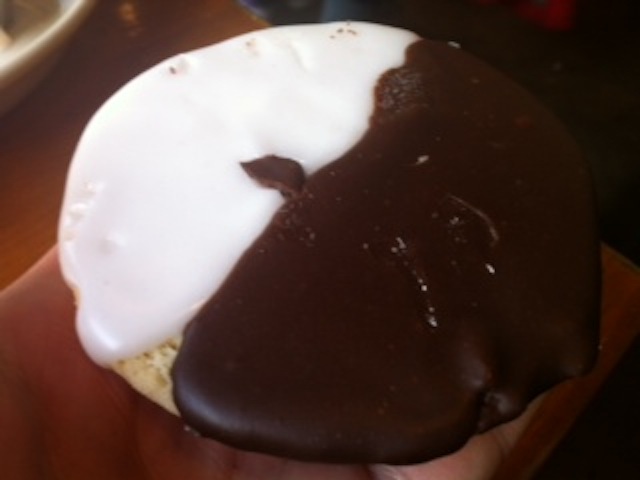 As of this writing, Rye Deli is still working out some kinks and I’ll get into more detail soon.

But first, for those people who do not read the comments, I just wanted to review the biggest debate I’ve ever encountered writing for TC Jewfolk.com. There are some in the Jewish community who think that anything less than 100% kosher should not be considered Jewish. My rebuttal is that the two are not intrinsically connected. I will stand pat on my assertion that Rye Deli is as Jewish or more so than many kosher restaurants in the Twin Cities and around the country.

For my third visit to Rye Deli, I was accompanied by my mother’s worst nightmare: the perfect shiksa (you know – tall, blonde, likes beer and football) . Even though according to at least one TC Jewfolk reader, I’m just a treyf-eating schmuck from New York who likes to eat, this shiksa wanted me to be with her as she had this new deli experience. First she needed a translator and then she needed ordering approval.

Interestingly enough, a new restaurant has recently opened in New York City with the same issue. Kutsher’s Tribeca calls itself a Modern Jewish American Bistro and it is not kosher at all. But if you look at the menu and the history of the place, you’ll agree that it’s as Jewish as it comes. I was a Kutsher’s kid growing up in New York and just the name alone screams J-E-W-I-S-H. I don’t care if it’s kosher or not, they’re serving a new version of gefilte fish, something called charoset chopped salad, and trout from the Catskills. Even the trout from those parts had lavish bar mitzvahs. I dare someone to tell me that Kutsher’s isn’t Jewish.

OK, back to Rye. Since opening day, I have been back two times and also heard from a lot of people in town who went there as well. Some things are consistent and some are not. That is the #1 problem with any restaurant. If Rye Deli wants to continue its early success, they are really going to batten down the hatches on consistency. Otherwise, it just won’t work.

So first, the things that need some work:

2. Some food items are still running out at inopportune times – like lunch.

After a certain period of time, a restaurant should be able to judge their supply and demand. But my mother always taught me that having more was always better than having less. So you have a few extra knishes. What’s the worst that can happen? You eat them? The staff eats them? You donate to a charity?

3. This is a simple one: the pickles should be free and every sandwich should come with them.

I’ve never been to a deli that charges for pickles. And at this point, Rye’s are not that good. I’d eat them if served with my sandwich, but I’m not paying $3 extra. If they were the best pickles I’ve ever had, maybe I would – but at the present time, I’ll pass.

4. The sandwiches are priced well, but they’re a bit small and they don’t come with anything. 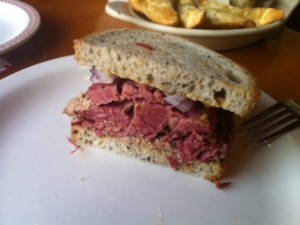 I’m not saying they have to be over-the-top like the caricature sandwiches in some New York delis, but another slice of meat wouldn’t be a bad thing. And then when the small-ish sandwich arrives by itself on a plain white plate, it looks sad and lonely (insert pickles here).

5. One of the more obvious things missing from Rye Deli is the hot dog.

Actually, let’s call them franks. I don’t ever think I ordered a hot dog at a deli – only at baseball stadiums. I was very much expecting franks to be offered – at least on the children’s menu. Just a standard grilled Hebrew National would suffice. I do understand that Rye Deli is making their food from scratch and sourcing locally – so maybe that has something to do with it. If that’s the case, I urge them to try making some!

And now onto the food:

Black and White cookies: I’m married to a BandW cookie expert and she reports that they are on par with any she has had in New York. I am not going to argue with her. 10 out of 10. 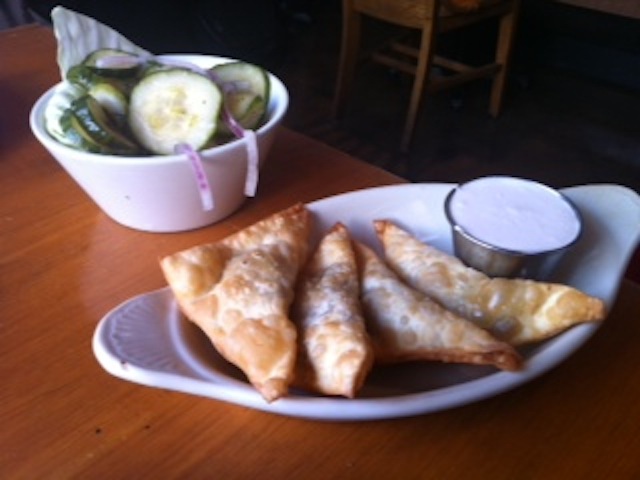 Fried Kreplach: Very underrated dish. These little pieces of fried deliciousness were done perfectly. Not too greasy at all and the brisket filling stayed intact. I actually used the horseradish sauce that came with something else instead of the sour cream dip and it worked very well. I would definitely order them again. 9 out of 10.

Smoked Whitefish: I almost passed when I realized that it didn’t come with an actual bagel, but with bagel chips. The very nice, but utterly clueless cashier, looked at me like I was making one of those Michelle Bachmann joker faces. So I got the bagel and not the chips. The fish was a little dry, but the horseradish sauce helped a bit. I would probably drive to Duluth and get some (Northern Waters Smoke Haus) before I ordered it again at Rye Deli. 3.5 out of 10.

Bagels: As I said in a comment from Part I, these are not the best bagels I have ever had. They are though, better than almost every other bagel in the Twin Cities. I had some bagels to go this week and they were better than the one I had in the deli. My only real problem was that the poppy seeds just didn’t stick. That needs to be improved. 7 out of 10.

Pickles: I won’t beat a dead horse here. They’re not that good and charging for them is a bit sacrilegious. Soggy and without much flavor. 1 out of 10.

Grilled Salami Sandwich: Another underrated gem. The smoked meats will get the attention, but some good grilled Hebrew National salami on a fresh bialy with the house mustard is tough to beat. 9 out of 10.

Tzimmes: A big portion for sure, but way too much potato for my tastes. I was looking for it to be sweeter. Not bad at all, but not something I would order again. 5.5 out of 10.

Spring Grove Soda Pop: Huh you might say? Well, at first, I was a little peeved that I couldn’t get a Dr. Brown’s Diet Cream with my food. I was going to write that in the ‘needs to work on section’ above. But them I discovered that Rye Deli carries Spring Grove Soda Pop. I stumbled upon Spring Grove Soda Pop at the Minnesota State Fair. This year was their first time at the fair after years of trying. It’s a small, family-owned business out of Spring Grove, MN and they make some amazing homemade sodas. I was thrilled by their success at the Fair as it is leading to wider distribution and availability. Their cream soda is great, but the lemon sour is spectacular. 10 out of 10.

I’d like to also point out that Rye Deli beat me to something. After my first visit, I noticed the tables lacking the most basic of all Jewish deli staples: a bottle of mustard. By my third visit, the mustard was there. Well done.

I still want Rye Deli to improve and to evolve with the feedback they are getting. Perhaps some menu items are just not working as planned and have to be replaced or altered. But the consistency is the key and until that is at a higher level, some folks will just not be happy. I also think that if the service improves, the food will taste better.

So we shall see. In the meantime, if anyone wants to join me for Jewish food and hear the correct pronunciation of rugelach, send me a message.