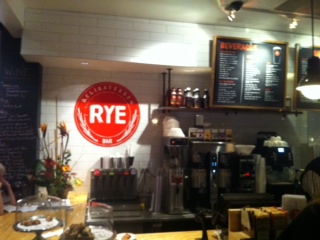 A new deli has officially opened and I’ve been as excited as my 4-year old was when we told him about our trip to Disney World. I’m the guy who wrote about My Deli Despair almost exactly one year ago.

So when I heard that a ballsy Jew named David Weinstein was going to open a real Jewish deli, I barely could contain the aforementioned excitement. After Andy Morantz and I held the 1st (and maybe last) Chopped Liver Spread-a-Pa-Looza, my options actually decreased. We ate all of that liver at the beginning of August. The aftertaste from the stuff we got from Mort’s and Crossroads is still there – I just can’t get rid of it. Seriously.

Our new deli is called Rye Delicatessen and Bar. I’ll just call it Rye Deli because delicatessen is just one of those words that gives me trouble. I had the chance to speak with owner David Weinstein about the opening and why he thought it would be a good idea to give the Jewish deli another shot right here in Minneapolis.

Weinstein is a real estate attorney from the East Coast who loves bagels and bialys. He also is a dead ringer for my brother – also a lawyer and also named David. Like me, he was a little disappointed by our selection in town. So, after eyeing a vacant space on Hennepin Ave for a while, he decided to concoct a plan with local restaurant veteran Tobie Nidetz. The goal is to have a real neighborhood spot – akin to the Jewish delis of old. You know, bagels and coffee in the morning, a corned beef sandwich for lunch, and maybe a drink after work. Well, maybe that last part isn’t very deli-ish – but 10 beers on tap sure does sound nice.

Before I stepped foot in the place, two things stood out for me:

So without any further adieu, here my take after visit #1. Remember folks, restaurants need some time to get their collective act together, so I’m cutting Rye Deli some slack.I hope that subsequent visits will get better each time. 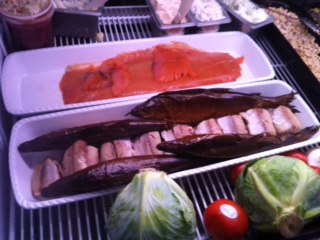 The space is great and I think it works for the concept. The bar looked great and each stool was taken. It is not full service – customers order at the counter and the food is brought to the table. I first noticed the whitefish and lox in the refrigerated case. The whitefish made me relax a bit, but then a bit of chaos ensued. Apparently, the lunch rush was more than anticipated (which is good!) – so quite a few menu items were out. Out were the corned beef, the smoked meat, the chopped liver, the black and white cookies, and the pickles (all things I had hoped to try).

The staff was great and super friendly, but I think a few episodes of Seinfeld or Curb Your Enthusiasm should be mandatory for new hires. A-rugula is something that goes in a salad, not a delicious rolled dough pastry. I should say that I was a little distracted by my son and by the Honorable Alan Page – who didn’t seem thrilled at the prospect of a sandwich other than corned beef.

Braised brisket: In lieu of the smoked meats, I went for the braised brisket sandwich. The rye bread was delicious, so that’s a good start. The brisket was ok – a little thick for my taste, but still ok. Frankly, I wouldn’t ever choose brisket over corned beef, so I’m not concerned. (5 out of 10)

Mish Mash: A nice bowl of chicken soup with everything (you know, carrot, matzo ball, kreplach). I think they nailed it and let me tell you why. Most restaurant chicken soups are quite clear and the broth is secondary to what you put in it. My grandmother’s soup was darker and you could actually taste the chicken. (9 out 10)

Noodle Kugel: A lot of kugels tend to fall apart, but this version held up well. It also wasn’t too sweet, which I like. (8 out of 10)

Bialy: I know that David Weinstein was pretty proud of his bagels and bialys, so I had to try one. For the record, this was the first time I’ve ever even seen a bialy in the Twin Cities. Really really good – I would trek over to Rye just for these. They even have the little bits of onion in the center. The burger buns are made from the same dough, so I;m looking forward to one of those really soon. (9 out of 10)

Cole Slaw: The delis I grew up in always had amazing cole slaw. I was a little disappointed here, but again, I hope it wil improve. (6 out of 10)

Rugelach: In lieu of the black and white, I got a few of these. Again, A-rugula is a salad ingredient. They were fine – but I really look forward to those black and whites. (6 out of 10)

Corned Beef: My new BFF, David, was kind enough to bring over a few slices once a new brisket was ready. This is not the corned beef I grew up with – thin sliced and melt-in-your-mouth. This is cut quite thick and far more hearty. More like the corned beef I expect to get at an Irish pub. It was very good and it certainly has potential. I look forward to an actual sandwich for a more accurate portrayal. (7 out of 10)

So there you have Part I. I’ll be back soon – but I’ll give them a few weeks before I write Part II. By the way, the prices are quite nice – far more reasonable than Mort’s and what I would expect from a neighborhood restaurant and bar.

In the meantime, if you head over to Rye Deli, let me know what you think and what you eat when you get there. Until next time…