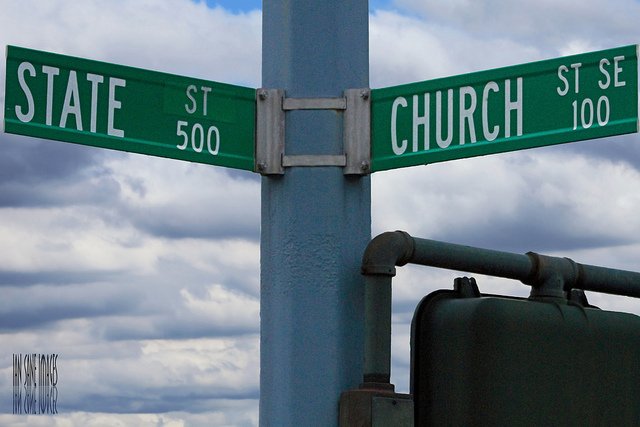 Dozens of Minnesota cities have a tradition of allowing Christian pastors to offer prayers before city council meetings, on time owned by the taxpayers. But a case before the U.S. Supreme Court could test that tradition if the high court rules that local municipalities cannot endorse religion at their meetings.

In Minnesota, thousands of prayers are held at the beginning of government meetings. In virtually every case, the prayer is given by a Christian pastor, and the vast majority are given by Lutheran faith leaders.

Here’s a brief sampling of those prayers:

In November 2013, the US Supreme Court heard arguments in the case, Town of Greece v. Galloway. In that case, community members sued Greece, a town in upstate New York, because the town held Christian prayers before every meeting.

Susan Galloway is Jewish, and Linda Stephens is an atheist. They’d been attending their town meetings for years. At first the town had time set aside for silent prayers, but new town leadership in the mid-2000s brought a focus on openly Christian prayers at town meetings. When the duo complained offering the suggestion to have non-sectarian prayers — ones that weren’t specific to Jesus Christ — the town rejected the idea. A lawsuit was filed.

Galloway and Stephens lost their first case but won on appeal. Judge Guido Calabresi, writing for the 2nd Circuit panel, said, “We conclude that an objective, reasonable person would believe that the town’s prayer practice had the effect of affiliating the town with Christianity” and that “a given legislative prayer practice, viewed in its entirety, may not advance a single religious sect.”

Greece appealed to the US Supreme Court where the issue sits awaiting a decision. It’s a decision that could affect dozens of Minnesota cities.

Christian prayers at city council meetings aren’t unique to any area of the state. First-ring suburbs of the Twin Cities do it, rural farming communities do it, major regional hubs do it.

The City of Columbia Heights bordering Minneapolis is one such example. Every city council meeting in the largely liberal community is led with a prayer. Pastors start the city council meeting with readings from the Bible as Deacon Larry Palker did on Oct. 28, 2013. Pastor Bill Hugo of St. Matthew Lutheran Church signed off his Oct. 14 prayer with “we pray in the name of Jesus.” Pastor Dan Thompson is a frequent guest of the council for the opening invocation. He’s unabashed in ending his prayers with “In Jesus name we pray, amen.”

Thompson’s church is part of the Minnesota District Council Assemblies of God, a denomination that gave time and money to a campaign for a constitutional amendment banning same-sex marriage.

Gay and lesbian residents of Columbia Heights must sit through a prayer by the pastor of a faith tradition that opposes their rights in order to access their community’s government.

That’s a similar situation in Fergus Falls in the Northwestern part of Minnesota. The Fergus Falls City Council hosts Christian pastors before each meeting to give a prayer. One such prayer was given by Pastor Eric Uggerud of Cornerstone Church that ended “in Jesus name.”

He supported the failed campaign to amend the Minnesota Constitution to ban same-sex marriage, and raised funds for the Health Resources Center, a “crisis pregnancy center” in Fergus Falls that provides misinformation to women seeking an abortion.

Uggerud gave a sermon in 2011 about homosexuality.

“I am not a homophobe or a gay hater. I’m just not. I have great love and compassion for people in the homosexual lifestyle,” he told his church. “Obviously, I disagree with their lifestyle but my disagreement is not personal or vengeful. My disagreement is scriptural, first and foremost.”

He read a passage from Romans that says homosexuality is sinful.

“Don’t get mad at me. Get mad at God because he’s the one who wrote it.”

On same-sex marriage, he said, “that is not marriage because marriage God has ordained marriage between a man and a woman. I’m not a homophobe; it’s just that scripture says this.”

“Just because someone is born that way doesn’t make it right. Where in the bible is homosexuality supported? Here’s where I land on this, homosexual practice is a decision to choose personal preference over God’s word.”

He concluded, “If we give approval to homosexual practice we lead people astray.”

Other city councils that offer Christian prayers at meetings include North St. Paul, South St. Paul, Paynesville, the Kandiyohi County Board, and Hutchinson. Willmar, Maple Grove, Moorhead, Little Falls, Luverne, and Osseo start the first meeting of each year with a Christian prayer but don’t open every meeting with a prayer.

The last few years have brought controversy over the highly charged issue.

Albert Lea had city council prayers until 2012 when the mayor ditched them. Only one council member tried to have them reinstated, but those efforts were not fruitful. The Albert Lea Tribune did offer a startling defense of the prayers.

“Should government leaders start their meetings with a nod toward God? There is, in fact, plenty of precedent for doing so. The legislature has chaplains to lead prayers, and other city councils invite pastors from the community to say a prayer before their proceedings. It seems the risk of drawing lawsuits over separation of church and state is slim, especially in a community where so many people identify themselves as Christians.”

In other words, if you are not a Christian in Albert Lea, you are left out.

In Litchfield, just northwest of the Twin Cities metro, the issue came to a head in 2011 after a pastor gave a controversial prayer.

“I must remind all the citizens, but especially those who profess to be the most religious and most patriotic, that there is more than one religion in the United States,” she wrote to the Litchfield Independent Review. “We must be ever mindful that even at the council table there is more than one faith represented and to disrespect any member of the community would be to disrespect our founding fathers and the pillar upon which this great country stands.

But Pastor Mike Zylstra of Litchfield Christian Church was livid after the mayor cited the separation of church and state. “It has been said a million times and apparently needs to be said again. There is no law protecting the state from spiritual and religious influence,” he wrote to the Review. “The law says that the state will not mandate a religion. “Separation” protects the church from the state, not vice versa. I’m so tired of hearing government agencies invoke a law that doesn’t exist to justify an action.”

Vida Hendrickson was mayor of Litchfield from 1979 to June 1984 and she was the one to put the prayers in place.

“This nation was founded on Christian principles, as evident in the writings of the original fathers and all the biblical icons displayed on and in the federal buildings that were constructed. I am very concerned about the direction I see our nation heading,” she wrote in the Review. “We seem to be forgetting how and why our government was put in place. Many seem intent on eliminating God from all our public arenas so as to be “politically correct.” Whatever that means.”

But the city’s paper sided with the council. “This isn’t political correctness run amok, just an attempt to ensure that all who enter a governmental meeting are comfortable enough to participate in operation of the city.”

TheColu.mn searched meeting minutes and televised city council meetings over the course of 2013, and every single prayer was clearly Christian. No leaders of other religious sects or nonreligious organizations gave invocations at any of the cities that hosted prayers.

That’s a problem for non-Christian and non-religious Minnesotans. The Minnesota Atheists have a position statement on just that issue.

“Minnesota Atheists holds that in fact the practice is a prima facie violation of the Establishment Clause, but that if it is permitted it must be non-sectarian and non-denominational. It should be compatible with the views of the entire community, including the nonreligious. The presiding celebrant should be rotated among organizations representing the diverse beliefs of the community. If a representative of Minnesota Atheists should ever have an opportunity to provide the invocation for a government meeting, the invocation should be respectful of the body and its members, and appeal for sound judgment and to universal values such as justice and human rights.”

The U.S. Supreme Court may decide the issue soon; a decision is due by June. It heard arguments in early November.

Justice Elena Kagan gave an example of what an overtly Christian prayer was and pressed the attorneys in the case that were defending the prayers in the town of Greece.

The most conservative member of the court, Justice Antonin Scalia, interjected saying that if it was a matter of prayers being offered by Christians as well as Jews and Muslims, there wouldn’t be much of a problem. “It makes a difference whether it is just one denomination that is being used as chaplain or open to various denominations.”

It seems in many locations, including in Minnesota, that is not the case however, and Christian prayers often dominate.

Shortly after the court met on the case, Susan Galloway told reporters how she felt when her hometown offered expressly Christian prayers before each meeting.

“I feel that the town has aligned itself with Christianity by just having Christian prayer givers,” said Galloway. “As a citizen, I felt that I was different because of my own faith and my religious beliefs.”

When it came time to pray, things got awkward.

“When they stood and I sat and I have 100 eyes looking at me, questioning what’s going on and thinking i’m being disrespectful — it singles you out. And it shouldn’t be in my town government”

She said non-Christians should not be “made second class citizens based on their faith or non-faith.”