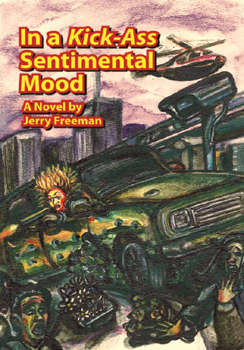 Freeman has been editing at MSR—which, closing on 80 years, is Minnesota’s longest-lived African-American publication (and, for that matter, the state’s oldest minority-owned business)—for the past decade. At the weekly community newspaper, he has developed a nettlesome reputation by assigning staff ace writer Charles Hallman stories delving into no small amount controversy, among them a story on black clergy members’ views on gay marriage and the series “Chasing The Tornado Money” (parts one, two, three) on just how much relief funding actually found its way to North Minneapolis victims of the deadly, vastly damaging tornado in 2011. He has also handled a range of less troubling news features from human interest to op-ed to metro news.

All the while, sending writers out to cover events and fielding material for the editorial pages, Jerry Freeman has been quietly hatching a writing project of his own. In a Kick-Ass Sentimental Mood (KaZoom Digital Publishing) is a futuristic novel featuring the cynical hero with a heart of gold: grizzled, hard-bit freelance detective-cum-bounty hunter, Gib, in his hellbent determination to fly in the face of corporate convention and its stranglehold on what no longer even pretends to be a land of the free or home of the brave, but a blatant, massive bastion of haves lording over and trampling on the lives and humanity of have-nots. If you think that description is long, the book itself is 760 pages.

Despite the fact that I’ve worked with Freeman the past several years at MSR, when In A Kick-Ass Sentimental Mood showed up in my mail I’d no idea it was coming and found myself in the odd position of having to offer an opinion on the work of someone for whom I handle a journalistic beat. Fortunately, it worked out. Much as it would remain a conflict-of-interest to turn in a review—a favorable one, anyway—I decided to do an interview. And can at least say, without crossing any ethical lines, I’m enjoying reading it. The text has Freeman’s characteristic penchant for cracking wise and a strong grasp of word flow.  Freeman and I did the interview by e-mail.

I don’t recall there having been an editor-in-chief of any color at a white publication in the Twin Cities since Anthony Porter left COLORS Magazine. You’re senior editor at MSR. What’s a white guy doing editing at a black newspaper? How is the experience?

Many years ago I volunteered to help out at the Spokesman by proofreading at night, after my day job. I was doing community organizing work then. I saw how powerful such a medium could be in informing people about important issues not covered in the mainstream press. I learned about the history of the paper, how founder Cecil Newman used it to fight the good fight. I realized that the current publishers wanted to continue that tradition. I tried to help out as best I could. One thing led to another. I served as lead editor for about 10 years, and I’m now glad to pass the torch to someone else, the very capable Vickie Evans-Nash, and devote more time to my fiction.

Working for the black press has been a rare privilege and the highlight of my working life. I’ve met many very talented people, great writers, great coworkers. We’ve told important stories that we know have made a significant difference and would not have been told otherwise. On top of all that, I get to play with the English language every day. Aside from making lots of money, which is not a high priority for me, I can’t imagine what else I could get from a job.

How do you like having a black woman for a boss? In this case, owner-publisher Tracey Williams-Dillard.

That, of course, depends on the black woman. So far I’ve been very lucky. Best bosses ever.

Am I the first person to assume, because of our society’s history of interaction between blacks and Jews, you had to be Jewish?

No, by no means the first. It might be because of the name: lots of Friedmans apparently changed their names to Freeman. My heritage is about as Anglo-Saxon as it comes. Whenever anyone asks if I’m Jewish I say no, but I’d be proud to say yes if it were true.

How long did it take you to write this book, when did you find time, how happy are you with how it turned out?

It took me about six years to conceive and write In a Kick-Ass Sentimental Mood. I’ve never had an opportunity to just write. I’ve always had full-time jobs. so I write at night and on weekends. Sometimes the jobs left me enough energy at the end of the day to write, but often not. It’s just always there, waiting for me to come back and push the adventure a little further. My greatest concern has been the time it takes away from family and friends, often a conflict there. Do I like how it turned out? Hell yes. I continue to have fun dipping into it myself every now and then and hanging out with my characters. It’s a very good book. Lots happens on many levels. People tell me they have fun reading it and it gives them food for thought. Mission accomplished.

A book this big, I’m surprised that by the time you got to the ending you weren’t ready to rewrite the beginning. How many drafts is it?

I’m one of those who write a semi-final draft as I go. There may be some major shifts here and there as I discover better ways to structure things, but word by word, line by line, page by page I’m constantly fiddling and polishing until it feels just right and then I move on. So for me, completing the final draft is truly just a joyous first trip through the whole experience and a final check for consistency, accuracy, all the parts fitting together seamlessly. That’s why that first and semi-final draft takes me so long. I read that Flaubert took five years to write Madam Bovary and he was like me, very picky about every word and sentence as he went along.  By the time I write the end, the book is 98.6 percent done. I worked on that book for five years before I knew what the end would be.

You’re actually a pretty nice guy. How come your protagonist is such a hard-ass?

I know you know better than to confuse an author with his protagonist. Given the story’s setting and circumstances, Indepol Officer Gib Gibson has to be a hard-ass to survive and do what needs to be done in the story. And I’ve always loved the hard-core noire sleuth thing, a fun genre to work in and very useful for moving the action along. It’s a good vehicle to carry the real action, the mind action. Besides, Gib secretly wants to be a nice guy. It’s just too risky in that time and place.

You big into sci-fi?

I don’t really consider this book sci-fi. I think it’s more like Gunsmoke, only in a futuristic setting. It’s the futuristic setting that suggests sci-fi, but that’s only there because it was necessary to set the story in the not-too-distant future. To do that convincingly, you have to invent some future. Was Orwell’s 1984 sci-fi? You might have noticed that Mood is set in the year 2048, a small nod to the master and my way of attuning myself to that tradition. Orwell frightened us about the dangers of too much government; I’d like to frighten people about the dangers of too little!

That’s not to say I don’t like sci-fi. I don’t read a lot of it any more, but I went through a long and very pleasurable sci-fi phase as a young man. I have the greatest respect for good sci-fi—for Phillip K. Dick, for example. It’s taken much too long to acknowledge many of the sci-fi masterpieces as great literature.

How’d you get interested in writing? How long ago?

I was committed to organizing and social activism for many years. As I was approaching my 30s I realized I had an unfulfilled need to express myself creatively and all I had to work with was a vivid imagination and a facility with words, so I returned to school to study literature and the craft of writing fiction. I wrote my first good story in 1975. Since then I’ve written two novels, a book of stories, a book of poems, and a children’s book, not counting a fair number of stories and editorials for the newspaper. That’s not a great body of work, but I feel good about having accomplished this much, all things considered.

How did you come up with this wild version of what, in the book, used to be the USA?

The premise of the book is that the privatization of America is virtually complete. That’s not really a stretch—many powerful people would like that to happen. It’s the right-wing agenda of libertarianism. It’s the agenda of Ayn Rand “objectivists.” So, say they and Grover Norquist prevail and very little government remains—everything is in private hands. The question is, what would that world look like, feel like? What consequences would follow from such a thing? What great dramas would get played out on such a stage? That’s what the book explores in some depth.

I’ve been working on a new novel, my third, for almost as long as I worked on Mood—about five years now and still running. Recently I decided to my great relief that it is in fact going somewhere I want it to go and that it will have an end. In the meantime I have a few challenges coming up to test my skill and imagination, and that’s exciting to look forward to. With luck, Mood will have been a mere finger exercise in preparation for this performance.  And with that, I’m off to try to push my new adventure a little farther down the road.

The Minnesota Spokesman-Recorder is a media partner of the Twin Cities Daily Planet. Read MSR stories in the Daily Planet here.