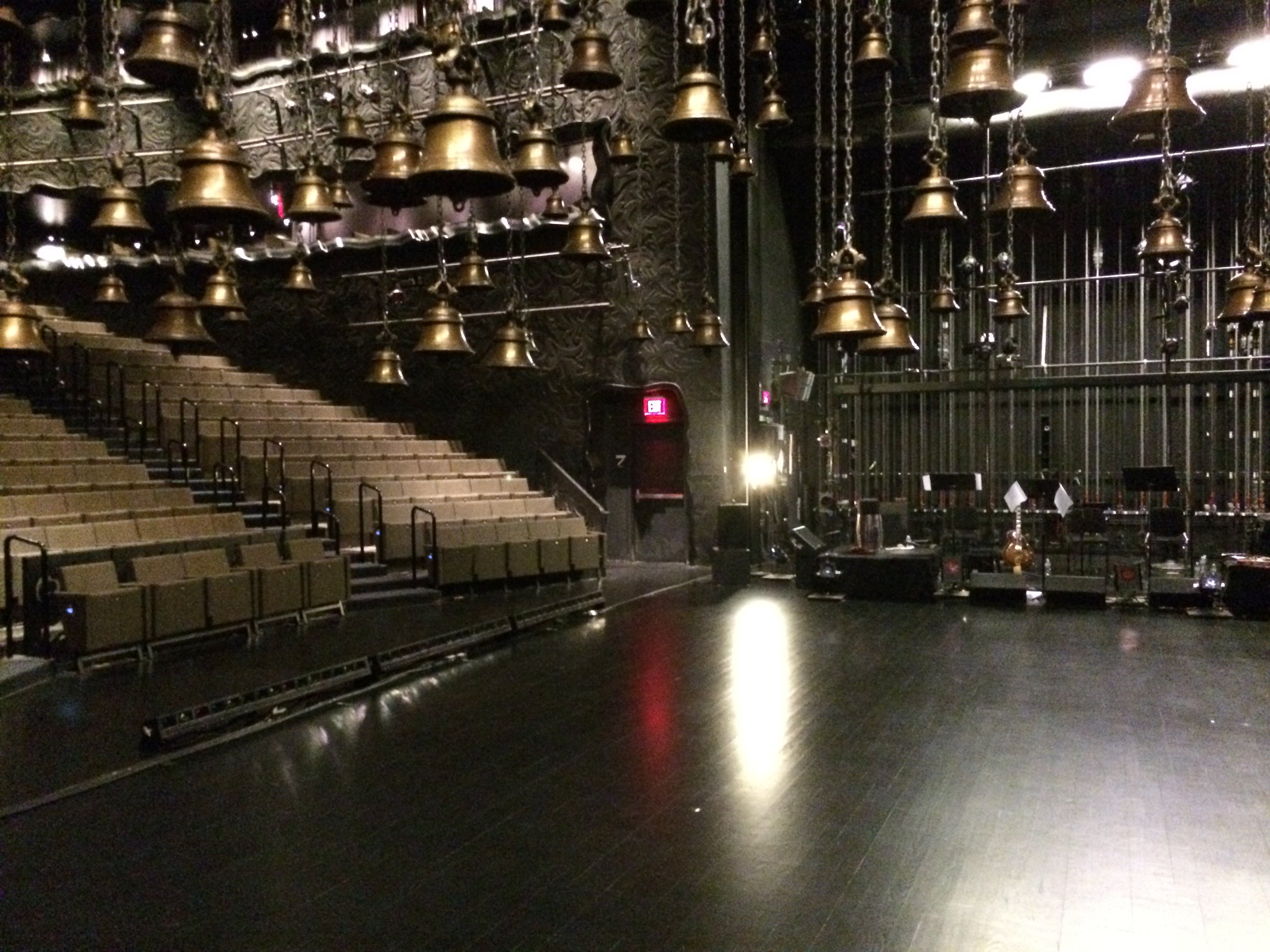 The stage with the Indian bells

Ragamala Dance’s directors Aparna Ramaswamy and Ranee Ramaswamy collaborate with jazz saxophonist/composer Rudresh Mahanthappa for the Walker Art Center’s newest commission entitled Song of the Jasmine. According to their website, Ragamala Dance studio draws “from the myth and spirituality of our South Indian heritage to make dance landscapes that dwell in opposition–secular and spiritual life, inner and outer worlds, human and natural concerns, rhythm and stillness–to find the transcendence that lies in between.”

The jasmine flower goes to the heart of sensorial worship in India, used not only for hair ornaments (as the dancers wore in this production) but also in worship rituals and even to bathe deities. This piece captures the essence of the flower, addressing and visualizing the poet Andal’s longing and the religious desire to connect, multisensorially with the god Vischnu–on the road to surrender.

This newest commission from the Walker Art center draws on the poetry by the 8th Century Tamil mystic poet Andal. In 143 verses, called the Nachiar Tirumozhi (sacred sayings of the goddess), she wrote of her intense longing for Vishnu, the Supreme God in Vaishnavism Hiduism. Song of Jasmine expresses the poet’s intense longing for Vishnu. The songs are commonly used in rituals and serve as guidance how one can attain a state of bliss by surrendering body mind and soul to the Divine Existence (from a translation provided in the program).

The tension created on stage comes from the refined movement and the relentless rhythm that drives the dancers on towards Vishnu, perhaps. The delicate finger gestures work against the harsh exactness of the arm movements, combined with synchronous movements, usually in threes, moving heel to toe and flat-footed. The dancers are simultaneously strongly and delicately bound to the stage floor. The almost inelegant plié-like position of the legs is covered by a beautiful fan-folded piece to fabric filling the open gap between their knees. The movement is always grounded and light at the same time, geometric and fluid. The extraordinary sensation felt with the twisting and tweaking of the precisely formed finger gestures in contrast to the stiff exacting lines drawn by the dancer’s arms, surprise and tickle the audiences’ sensibilities.

Departing from the traditional ritual poet’s piece and the traditional music style, the company expands on the experience by adding the jazz saxophonist Rudresh Mahanthappa, which creates a curiously intoxicating hybrid between American and Indian genres.

The musical style is replete with contradictions underscored by the added sax. The horizontally played mridangam drum played by Rajna Swaminathan maintains the crucial relentless rhythm that serves as the scaffold for everything. The drum is set horizontally in front of her and tapped on the side with a mic inches from the complex finger movements. Also played in an unusual position is the violin–under the chin, but the scroll rests at the feet of the seated musician, played vertically, from an elevated mat where Anjna Swaminathan was perched next to the other musicians. The electric guitar was played by Rez Abbasi and the South fusion Indian flute by Raman Kalyan. Redresh’s jazz saxophone tones through and around the four traditional instruments played in the Carnatic tradition, creating what they call a “live soundscape” that meshes two worlds.

According to audiences members I spoke with, the format and the dance structure is essentially traditional, but the music has an added jazz touch creating an unusual but not unpleasant combination, even to the culturally informed. As a reminder that the jazz serves as an interloper, there were moments when the dancers fell away and the spotlight settled on the sax. The time and place melt away as these solos could have been any extraordinary player, even one encountered in a Paris basement or a solo in a jazz club. (Perhaps at that moment, the sax was a stand-in for Vishnu?) The stage was bare except for the musicians and a collection of heavy, chain mounted brass Indian bells, imported for this piece. The bells, for all their careful hanging, seemed like an afterthought when they were rung only a few times. They decoratively evoked the temple and call to worship, but didn’t really expand the musical experience.

Song of Jasmine is another jewel in the landscape of Twin Cities arts scene and will go on the Lincoln center later this year. We shouldn’t underestimate the national importance of these companies and the role of the Walker in commissioning these pieces.