HOLLYWOOD, CALIFORNIA. One of the best reporting gigs of the Academy Awards is the backstage Interview Room, where the Oscar winner goes after receiving their award.

Fresh off the stage, the winner is in a grand mood; exhilarated, happy and feeling a rush of emotion.

“And I’m standing here now … I got a prize for excellence for the work I do in something that’s not my job, it’s not my hobby and it’s not my fad; it’s my career. That feels wonderful,” said Matthew McConaughey, Best Actor in a Leading Role winner, to the Interview Room press.

The scene of an Oscar winner gushing about their win makes the Interview Room festive and exciting. Journalists hear how thrilled the winners are and share that joy with a global audience.

The Academy of Motion Pictures Arts and Sciences’ mission is to make the Interview Room just that: an interview room. No photos are allowed and violators are escorted out if the rule is dishonored. This makes the Interview Room more relaxed: no clicking cameras, no rushing the winner for photos (there is a photo room for that), no paparazzi to contend with. The journalists wear tuxedoes and gowns, preserving the formal elegance of the Oscars.

Media reps sign an agreement with the Academy to respect the principle of the room: interviews only. “No photography of any type is permitted in the Interview Room at any time.” Tweets are allowed. Live blog posts and articles transmitted to editors are permitted. But no photos of any sort. Journalists are provided written and verbal reminders (“IMPORTANT: READ ME” “Credentials 411” “This is not a photo room” “You can not go up to the winner in the Interview Room, staff will hand you a microphone for questions”).

The Academy is clear: “The Academy Awards telecast is a private, formal [sic] event.” 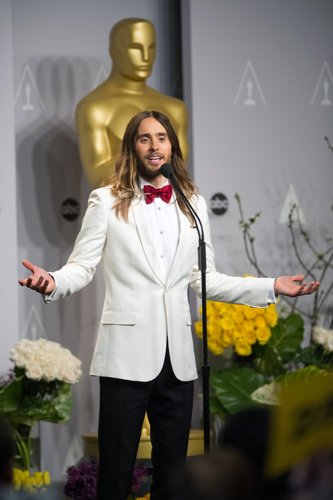 (Above) Where is Jared Leto’s Oscar statue? Photo: A.M.P.A.S.

Jared Leto, winner of Best Performance by an Actor in a Supporting Role, was the first Oscar winner in the Interview Room at the 86th Academy Awards. Facing the room, and Academy moderators, he spontaneously decided to let the members of the press hold his Oscar statue. “Does anybody want to try it out for size? You can. If anybody wants to fondle. Here. Pass it around, but if you have swine flu, please don’t touch. I think this is the first, the first person to ever give their Oscar away for an orgy in the press room,” he said. He handed over his Oscar to the front row of journalists.

Leto then went a step further and said: “If you guys want to get a selfie with the Oscar, go for it. Now’s your chance.”

The Academy moderator interrupts Leto: “It’s no cameras allowed in this room.”

Leto, annoyed, retorts to the moderator: “Oh, no fun. You guys want to get media, let the media do what they do. Viva la revolution, baby.”

Tweets are allowed in the Interview Room, after all. But photos are not. A selfie is a photo, typically posted on Twitter. And there is the quandary. Twitter yes, selfie no. 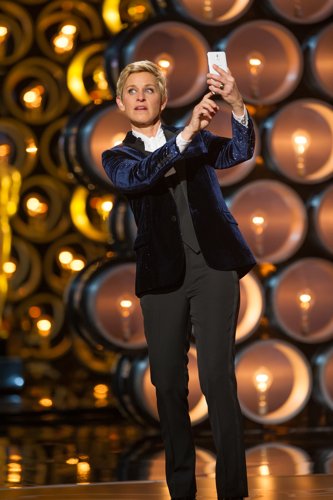 (Above) Who owns a selfie? Host Ellen DeGeneres tweets at the 86th Academy Awards. Photo: A.M.P.A.S.

When Oscars host Ellen DeGeneres took a selfie photograph in the event’s audience, and posted it, a debate erupted in the Twitter community: who owns a selfie? The Poynter Institute, a go-to source for journalists, says who owns the right to social media photos isn’t “all that cut and dried.”

Jared Leto was enjoying his win and wanted to share his Oscar with the press, encouraging Twitter selfies. A thrill for the press, but a dilemma for Academy Interview Room moderators and security staff.

“And thanks for getting my Oscar dirty with your fingerprints,” joked Leto as he left the backstage Interview Room.

There may be a new selfie rule at next year’s Oscars.