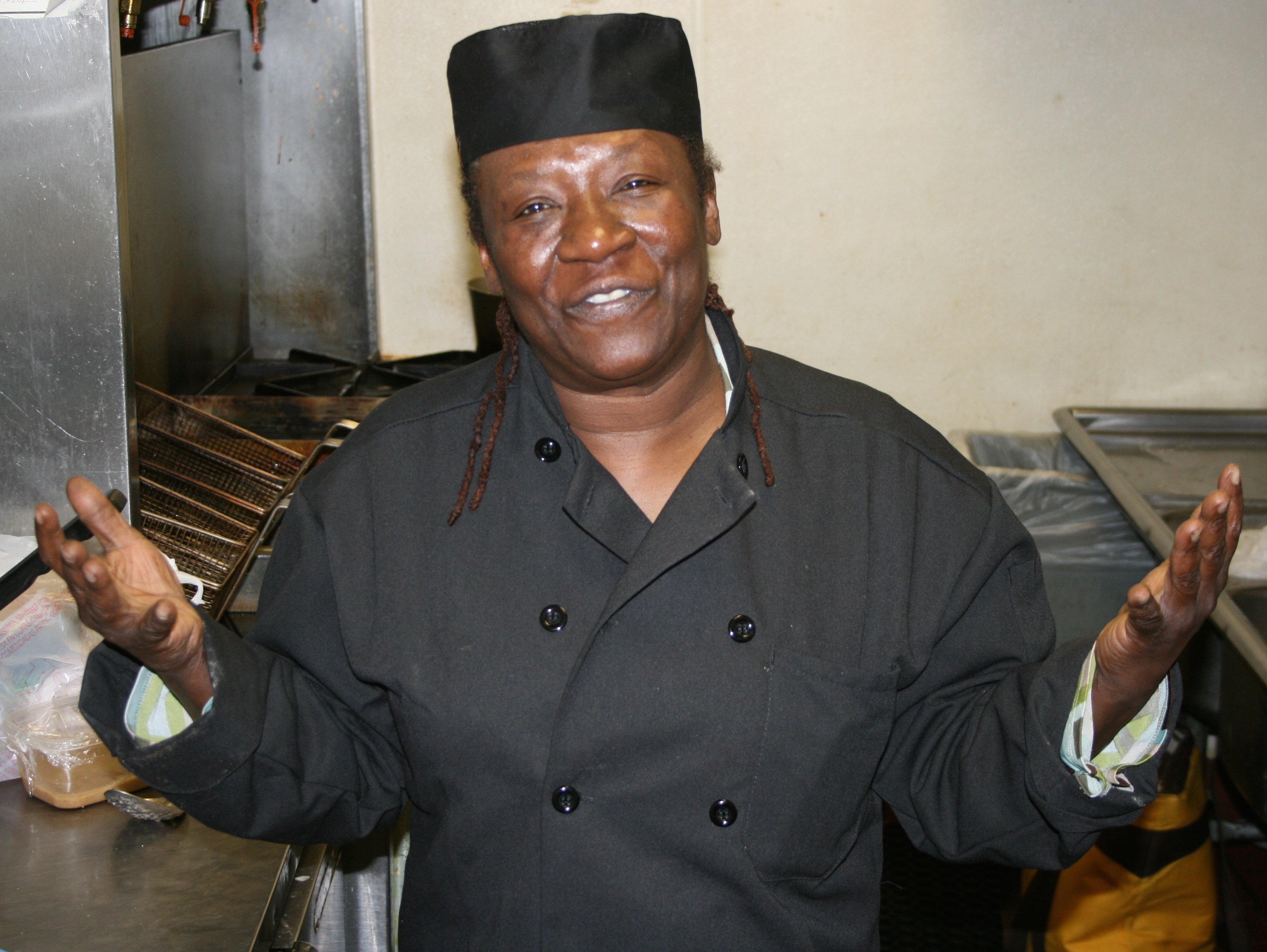 Arnellia Allen and Jackie Williams can boast several “firsts” and “onlies” between them. Allen is the only African American woman to own a nightclub and hold a liquor license in Minnesota. Jackie Williams was one of the first African American women to graduate from the highly competitive and demanding Chef Apprentice Program at Pennsylvania’s Allegheny Community College in the 1980s. (There were very few black men admitted either.) Now the two women are together on University Avenue in St. Paul, working to put business at Arenellia’s Night Club back on track just as light rail trains are set to start running.

The two trailblazers, who had known each other for years, joined forces at Arnellia’s in February 2014, shortly after the East Side incubator kitchen where Williams had been based since 2009 was closed down by the State. She was aware that Allen “had been going through tremendous hell,” with the kitchen at her club. The club also has experienced a steep decline in business recently, attributed largely to light rail construction and the resulting loss of parking.

Williams and Allen knew that if they came together, Allen’s club would benefit from Williams’ culinary and business background, and that striking up the relationship would benefit Williams, too. Abundant Catering had been using a host of vendors with liquor catering licenses. Through their partnership, Williams would help Allen receive her liquor catering license, and then contract those services through her.

Finding herself in this world of food remains something of a surprise to Williams. Growing up in a family of 12, one of seven girls, she says that she was cooking by age nine, but never thought she would go school to become a chef. From grades seven to 12, she was more interested in fashion design. Everyone came out of school, she adds, skilled in some kind of a trade. 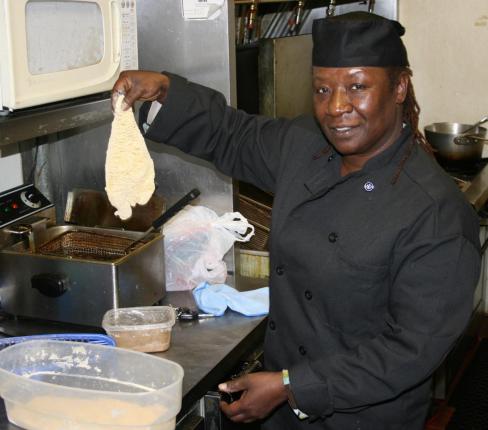 Her first real job was at the Houlihan’s restaurant chain, which set her on her path. She worked there for eight years, becoming a corporate trainer, opening stores far and wide. What bothered her, she says, is that whenever she returned from opening a store, “the white boys would get promoted.” Not her. Not women generally. That made her determined to become an entrepreneur and succeed on her own terms.

Williams, who moved to the Twin Cities in 1990, credits the St. Paul-based Neighborhood Development Center (NDC) and its micro-entrepreneur training program for much of her success. In 2003, she was working out of an incubator kitchen at Seven Bridge World Market in St. Anthony Main, when NDC invited her to move into the former Lendways Bar space at University and Dale (609 University Ave.) to start Abundant Bistro. That became home to her restaurant and catering business until the building was torn down to make way for Frogtown Square in 2009.

While at that location, Williams made what she says was a “bad decision.” She chose to close down the restaurant, after barely three years. She continued doing catering out of the space, and opened a kiosk, Rondo Coffee Café, at the new Rondo Community Library, kitty-corner from her shop. The library, it turned out, catered mostly to kids, not coffee drinkers. She also had a stand at the farmer’s market down the street.

It was also during this chapter that she struck up a deal with the owners of Big Daddy’s Old Fashioned Barbeque to split the rent with her Abundant Catering, an arrangement worked out by NDC. Initially the Big Daddy’s team worked out of the parking lot. When winter came, Williams talked them into coming indoors.

Moving to St. Paul’s East Side and returning home to University Ave.

When the building at 609 University came down, Williams relocated to 705 3rd Street on the East Side of St. Paul, home of an incubator kitchen owned by Merv Hough’s Toast to Bread. Hough told the Star Tribune that he started the business as a “place where entrepreneurs with dreams can get started without needing a ton of capital to do it.”

Williams says that there were nine or so tenants working out of the incubator. Many were recent immigrants and did not understand all of the regulations and licensing procedures and requirements. That led to the kitchen being shut down in January 2014. 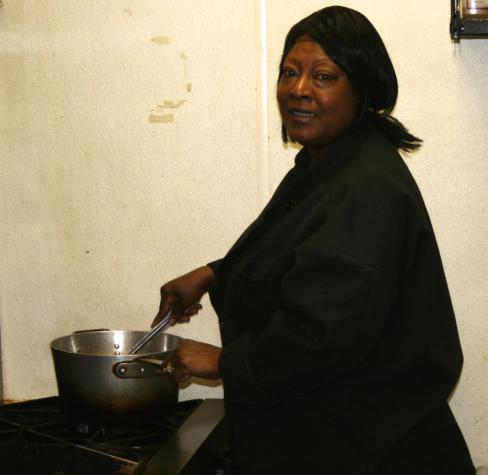 A month later Williams was restarting Abundant Bistro out of Arnellia’s. She brought Florence McGill, one of the entrepreneurs from the East Side incubator kitchen with her. McGill’s African Delights Food adds a selection of Liberian and West African foods to the soul food items cooked by Williams. They’re part of the lunch menu each Tuesday through Saturday. 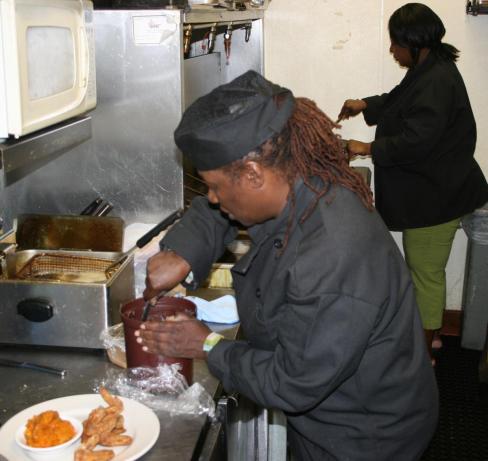 Williams, a Pittsburgh native, can reel off a whole list of accomplishments. These include serving as executive chef at Capers Restaurant in Edina, then at Café Solo, Dayton’s Boundary Waters Restaurant, and Eat Your Heart Out Catering. Since 2000, she has been the owner of Abundant Catering and Bistro, for which she received the Neighborhood Development Center (NDC) Best Recipe for Success Award in 2005. Abundant Bistro was also named Best Soul Food Restaurant by City Pages in 2005 and 2006.

Among the many celebrities Williams has cooked for: Prince, U2, Mary J. Blige, the Rolling Stones, BB King, Tim McGraw, Bonnie Raitt. Williams has also prepared meals for visiting dignitaries including the King of Norway.

Meanwhile, Arnellia Allen, a Mississippi native and former factory worker has owned Arnellia’s “The Legendary Club Apollo” of Minnesota since 1992, and before that, the Metro Bar and Grill in downtown St. Paul. A Minnesota Black Music Awards recipient for Best Music Venue, Arnellia’s has been a local cultural institution that has had its ups and downs. Students at nearby Gordon Parks High School are reportedly working on a short documentary video about Allen.

Visions of a new, Louisiana vibe

Like most bars and clubs of a certain vintage on University Avenue, Arenllia’s lacks windows, which leads many to assume that the club is closed, says Williams. To build the business back up, Williams and Allen are working to secure façade improvement grants and a permit to open a patio or sidewalk café, something that’s being encouraged by neighborhood associations. It’s all part of a “new vibe” that is being cultivated on University Avenue.

Envisioning trains filled with passengers streaming by, Williams says she wants the place to become more inviting. Windows—or even garage doors that open up the entire front—outdoor seating, and music pouring out, will give the club a “Louisiana vibe,” she says. While music has remained a constant at Arnellia’s, comedy is on the bill as well.

The sounds–including laughter–will be complemented by her acclaimed soul food, catfish, chicken, wings smothered in gravy, porkchops, and an array of sides, such as mac n’ cheese, black eyed peas, collard greens, and candied yams.

While that’s what’s on the menu these days, Williams confesses that her passion is creating “artistic food,” including French Nouvelle-influenced classics. 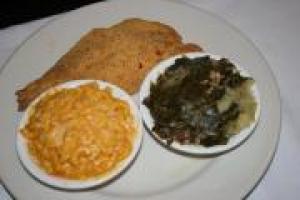 Catfish with mac and cheese and collards

Plans are also in the works to make the business more of a community gathering space during morning and early afternoon hours, times of day that see few patrons so far. Among other things, Allen and Williams would like to see people begin using Arnellia’s to hold breakfast meetings. Williams points out they’re already set up for powerpoint presentations. 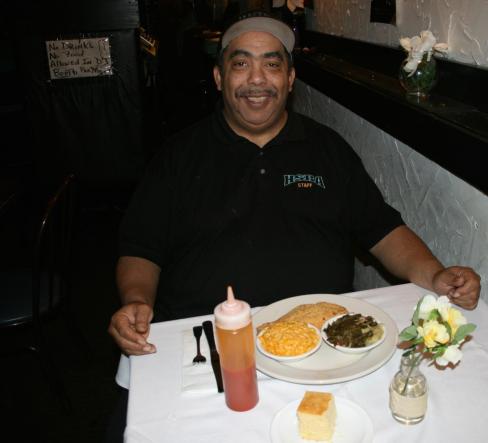 Layne Bellamy, a regular customer, and performer with the band Not Guilty

Arnellia’s is not the only place where you’ll find Jackie Williams in the summertime. She’s become a regular at the Minnesota Renaissance Festival, having sold her salads and wraps, turkey, steak, and chicken there every year since 2009. A popular figure, she recieved the Best Independent Booth Award in 2012 and 2013.

What else does Chef Jackie Williams hope to achieve? The gregarious chef says that her next goal is to host her own television show.

Read about other University Avenue businesses navigating changes prompted by the Central Corridor light rail line in our series Along the Corridor.